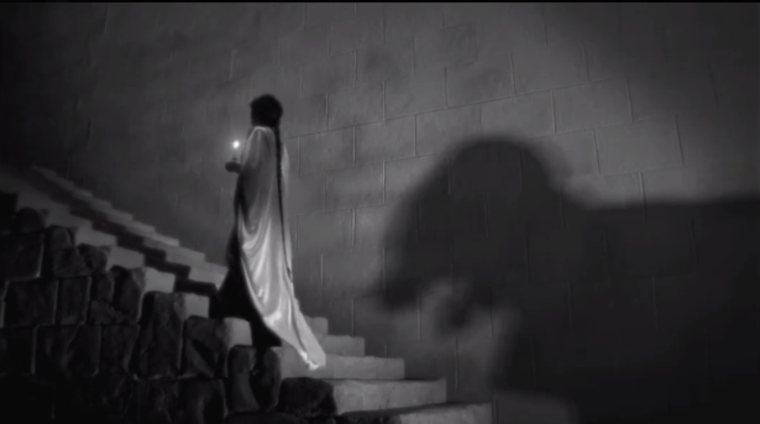 UPDATE: American Horror Story fans rejoice! FX has another two clips floating around, both of which likely have nothing to do with Season 6. The first is one of the oddest yet, as a nurse uses a set of sheers to butcher a wind chime made of human teeth.

The next one, Camp Sight, is also peculiar. It starts off like your typical creepy alien abduction, but these aliens don’t seem to require their captives be alive for whatever experiments they have planned.

Original Story: FX is not slowing down the hype train, as the build up to American Horror Story Season 6 continues onward. Following an internet scavenger hunt for six teaser videos a few weeks ago, a new batch has hit the web. And yes, they are all just as creepy and misleading as the ones that came before.

First up is a clip entitled The Mist. We see a humanoid alien-like creature, crawling on all fours on a railroad track. The yellowish-orange mist clouding the clear view looks toxic, giving off a Chernobyl vibe.

Next up is another short teaser, Hang Tight, but this one seems more… tame, for lack of a better word. There’s nothing to uncover here, in terms of guessing Season 6’s setting or plot. However, we do get a look at disgusting bugs and the “?6″ symbol expressed in different materials.

The final one invokes American Horror Story’s inner Dracula. The video is in black and white, as a woman in a white night gown ascends a flight of stairs by candlelight. A shadowy figure, that looks suspiciously monstrous, reaches out to her as its form grows. A shrill scream is heard, and then a cut to black. It’s fair to reason she didn’t make it through the night.

What’s important to remember is that none of these may actually reflect the show’s next run. FX CEO John Landgraf recently said of the previously released six teasers (via IndieWire):

“One is accurate; all the rest are misdirect.” He continued, “We decided, Ryan and I and [marketing president] Stephanie Gibbons, that it would be really fun this year… to keep it a mystery. There is a theme and a setting and a place and time, but we’re not going to reveal it.”

Interestingly, there are reports claiming the show will tackle the mystery of Roanoke Island. That has yet to be confirmed, but it’s a haunting part of American history that’s yet to be fully explored in fiction.

As we wait for the truth to hit our television screens on September 14, tell us your thoughts and theories in the comments below.