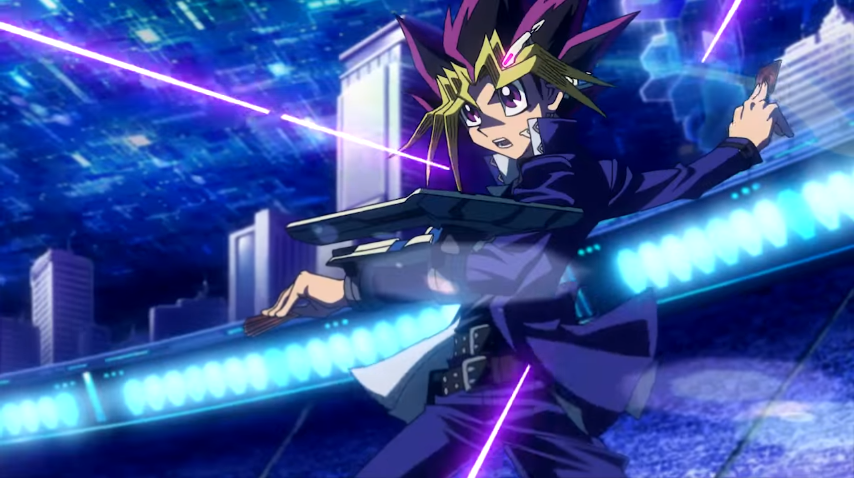 It’s been 10 years since the final episode of Yu-Gi-Oh! broadcast in the United States. Since then we’ve had spin-offs following brand new characters such as Yu-Gi-Oh! GX, Yu-Gi-Oh! 5D’s, Yu-Gi-Oh! Zexal and Yu-Gi-Oh! Arc-V. However, despite the continued success of the trading card game, turned manga, turned anime longtime fans have yearned for a nostalgic return to the original cast of characters from the first run of the anime such as Yugi Motu, Joey Wheeler, Seto Kaiba and more.

Franchise creator Kazuki Takahasi has returned for a new feature-length film for the franchise’s 20th anniversary. It’ll serve as a continuation of the franchise, set after the young card-game playing prodigy Yugi defeated his Egyptian Pharaoh alter-ego Atem allowing him to return to the after-life. Yeah, it’s pretty dense and weird. The movie titled Yu-Gi-Oh!: The Dark Side of Dimension found modest success this Summer at the Japanese box-office and has been confirmed for a U.S. dub and release for sometime in 2017.

And fans can rejoice, because not only does the first U.S. trailer give us a glimpse at the returning characters and the slick, modern animation. It’s also been confirmed that franchise veterans and the original voice actors for Atem/Yugi (Dan Green) and Seto Kaiba (Eric Stuart) are returning to reprise their roles. Watch the trailer below:

Yeah…that didn’t give us much plot to work with. But fear not! We have an Official Synopsis to accompany the trailer;

“The stakes have never been higher; the rivalries never as fierce; the risks never so great. One wrong move—one card short—and it’s game over for good. A decade in the making, Yu-Gi-Oh! The Dark Side of Dimensions features new designs and an all-new story from the original creator of the global phenomenon, Kazuki Takahashi. His masterful tale features anime’s most beloved characters in their long-awaited return: Yugi Muto, Seto Kaiba, and their faithful friends Joey Wheeler, Tristan Taylor Téa Gardner, and Bakura.”

And that was even more vague.

Yu-Gi-Oh! isn’t the only beloved anime franchise right now that’s getting a nostalgic revival with the original cast. It was announced earlier this month that most of the voice actors from the original series of Digimon will be returning to the big-screen in September 2016 for Digimon Adventure Tri. Here’s the short teaser: