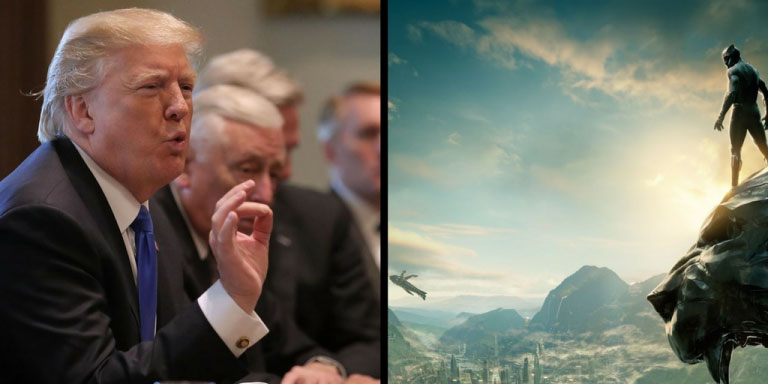 Donald Trump has been in the news cycle since his election just over a year ago in November of 2016 and Black Panther is due to come out in February so it should be as no surprise that someone wants journalists to ask Trump his opinion about Wakanda.

The jokes started just this week after President Trump has made the headlines yet again for his crass comments about Haiti, El Salvador, and several other African countries. In a meeting with lawmakers in the Oval Office, President Trump expressed his frustration over the bipartisan immigration deal by calling these nations “shithole countries.”

“Why are we having all these people from shithole countries come here?” said the leader of the free world according to multiple reports that have since been denied by the President.

According to Raj Shah, spokesperson of the administration, the Trump government is working towards a solution to immigration. However, Shah explains that the president’s number one priority would always be the American people.

“Certain Washington politicians choose to fight for foreign countries, but President Trump will always fight for the American people. Like other nations that have merit-based immigration, President Trump is fighting for permanent solutions that make our country stronger by welcoming those who can contribute to our society, grow our economy and assimilate into our great nation.”

Despite the statement released, it didn’t take long before people on Twitter took notice and reacted in their own special Twitter way. In the light of the Trump faux pas, stand-up comedienne and writer, Sara Benincasa, offered journalist $300 on Twitter to get the president to comment on the current relationship between the United States and Wakanda.

I am offering $300 to the journalist who very seriously asks Trump his opinion on our nation’s relations with Wakanda and gets the question and answer recorded live on video. I know $300 doesn’t sound like a lot to some people but I also know what most reporters make so…$300.

Like most comic book fanboys know, Wakanda is a fictional nation that would be depicted in the upcoming Marvel flick. It is the home of T’Challa otherwise known as the Black Panther.

Unsurprisingly, people online were enthused by the offer. Some, like Alex Zalben, managing editor of TC Guide and TV.com, chimed in and offered more money:

If you follow this up with a question (that he answers) about whether Wakandan/American relations are complicated by them granting asylum to the terrorist fugitive James Buchanan Barnes, I will double the offer. https://t.co/tUxrI0qcYS

James Buchanan Barnes or Bucky Barnes is Captain America’s former sidekick. He was eventually brainwashed and turned into an assassin in the Winter Soldier series – fighting against his once ally.

Obviously, this was all done in jest since it goes against journalistic standards, but it still didn’t stop some people from not realizing it was a joke and the original writer of the offer Sara Benincasa wrote:

A thread about #wakandagate, death threats, rape threats, people who don’t understand humor because they’re simply not that inquisitive or thoughtful, Twitter, and YOU, my babies. https://t.co/ZdEa3ZjTXL

We don’t condone rape threats of any kind, but if you guys have any fake news questions about Wakanda that you want to tweet at Sara she clearly appreciates the humor.

In the meantime I kind of wish someone would ask the President or someone on his staff about Wakanda because let’s face it their not the best when it comes to real vs. fake countries  since in December a couple of Russian pranksters managed to get the Ambassador to the U.N. Nikki Haley to comment on the fictional country of Binomo in the South China Sea.

You can see the world of Wakanda when Black Panther comes out February 12, 2018, tickets are on sale now.