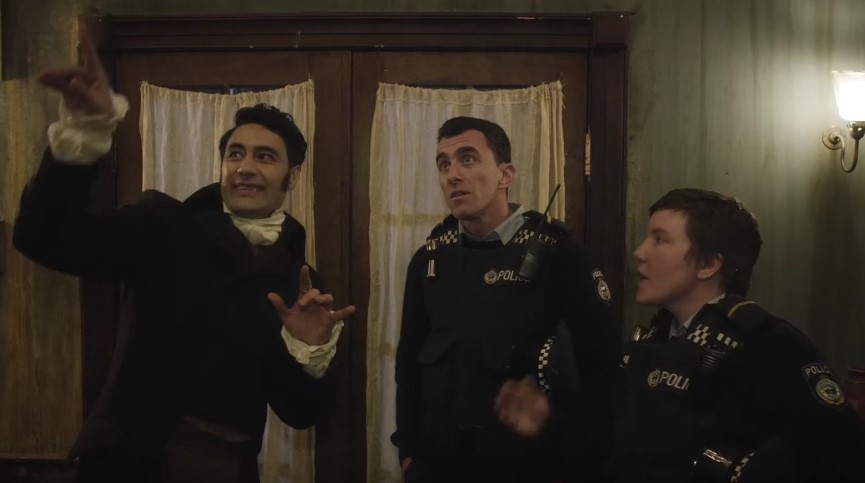 Taika Waititi and Jemaine Clement poked fun at the vampire genre with their mockumentary What We Do in the Shadows, and now the paranormal branch of Wellington, New Zealand is getting an expansion with the show Wellington Paranormal.

Check out the first teaser:

The series follows two bumbling Wellington cops (played by Mike Minogue and Karen O’Leary) who traverse the city of Wellington trying to solve paranormal cases. To those who’ve seen the movie, they’ll remember O’Leary and Minogue as the cops who found themselves inside the vampires’ flat:

Just like WWDITS, Wellington Paranormal will also follow a mockumentary format, only instead of just vampires, we’re looking at a bunch of other spooks and spectres. There’s also speculation that we’ll be able to see characters from the movie make an appearance. Though I’d want to see more of Viago (Waititi) and Vlad (Clement), I think the guest appearances will only be limited to more minor characters like Nick (Cori Gonzalez-Macuer) and Stu (Stu Rutherford).

It’s also worth noting that there is a What We Do in the Shadows TV series in the works. This won’t be a spinoff, but it will be an Americanized version of the original movie. Waititi and Clement are still involved, but it’s unclear if the series will take place in the same universe as the movie.