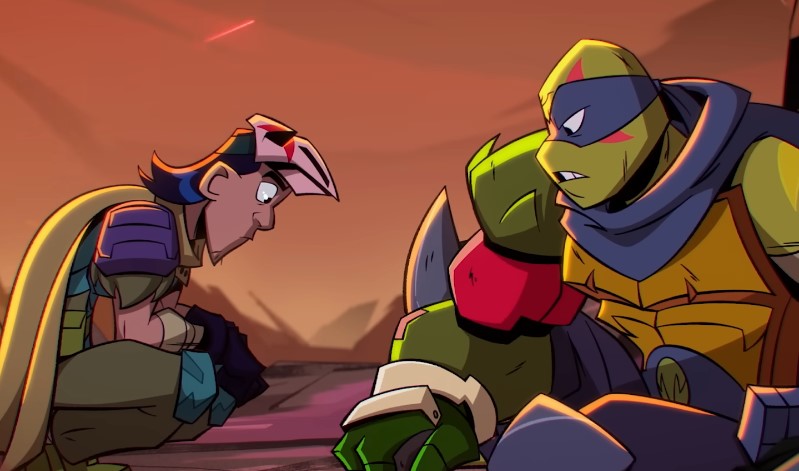 This Friday is going to see a lot of great releases on streaming, and one cool property is going to be the Rise of the TMNT movie on Netflix. Just in, we have the first four minutes of the film released, and it has Casey Jones teaming up with an older Leo and Mikey.

While everyone has a pretty good idea of the Teenage Mutant Ninja Turtles, Rise really embraces the anime genre and has granted each Turtle specific powers. The opening clip alone has Michaelangelo going full hokage on a bunch of Krang robots.

The story is essentially Terminator with Casey filling in the role of Kyle Reese, but I guess it makes the character more interesting. While I suspect that the team will manage to save the future, I have a feeling that Casey is going to be staying in the present and become a series regular.

I’ll admit, a lot of OG Turtle fans found Rise a bit jarring, but the reboot is actually pretty fresh and puts a new spin on some classic characters. If you haven’t checked out the show yet, maybe this movie is going to be a great jumping point into the franchise.

Traveling from the future, Casey Jones has one mission: find the key that stops the Krang to save the world! But he’ll need the cowabunga crew’s help in this epically awesome adventure based on the “Rise of the Teenage Mutant Ninja Turtles” series.

Catch Rise of the Teenage Mutant Ninja Turtles: The Movie when it premieres on Netflix on Aug. 5.