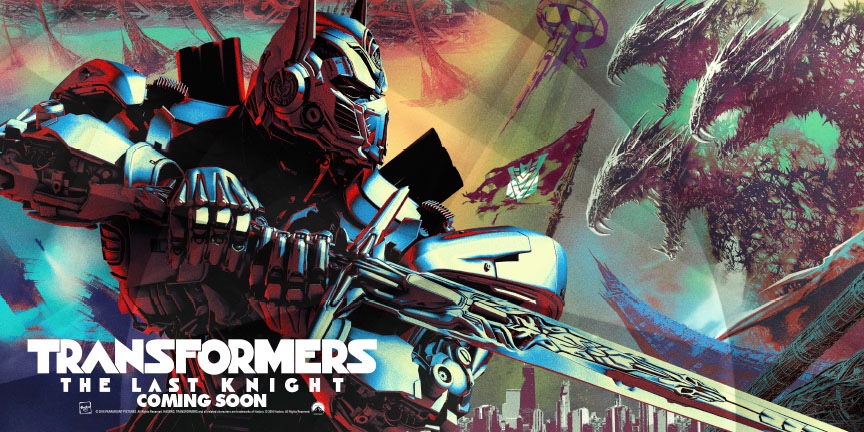 The official billboard art for Michael Bay’s Transformers: The Last Knight has been revealed. Front and centre in the illuminating and comic-book esque image is Optimus Prime, wielding a mighty sword in preparation to fight what appears to be a three-headed dragon like creature.

Between those two objects a torn flag with the Decepticons symbol emblazoned on it can be seen, seemingly a symbolic nod to the film’s title, maybe? Beneath Optimus Prime’s elbow on the left side of the image is a vehicular craft of some description heading toward a broken wreckage.

Principal photography for Transformers: The Last Knight began on May 25, 2016, in Havana, Cuba. Filming began in early June but that didn’t stop Michael Bay from releasing images of the Robots in Disguise and revealing that Onslaught will appear in the movie. Not much else is known about this latest entry into the bombastic blockbuster franchise, but the addition of Onslaught will no doubt be music to the ears of Transformers fans. Why? Because Onslaught is apart of a sub-faction of the Decepticons, the Combaticons, who have the ability to join together and form Bruticus. You don’t get much worse than Bruticus.

With that in mind it is safe to assume there will be many explosions instigated by giant robots beating each other up and the destruction of whichever unfortunate environment becomes the battleground of the skirmish. The last Transformers movie secured over $1 billion at the box office and no doubt this fifth instalment will do the same.