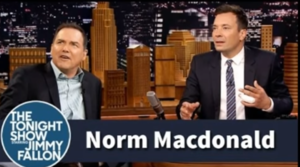 SNL veteran Norm MacDonald is set to appear on The Tonight Show with Jimmy Fallon this week. The comedian and actor has a new show coming up and the appearance would have been a chance for him to promote the series.

Unfortunately, it seems like the production of the talk show did not take kindly to MacDonalds recent and controversial comments about the #MeToo movement. In the official statement sent out by The Tonight Show home network, NBC, the network explained that they have cancelled the appearance due to the comments the comedian made in a recent interview:

“Out of sensitivity to our audience and in light of Norm Macdonald’s comments in the press today, ‘The Tonight Show’ has decided to cancel his appearance on Tuesday’s telecast” read NBC’s press release.

MacDonald is currently on a press roll in order to promote his newest Netflix series Norm Macdonald has a Show. During an interview with Variety, the SNL alum revealed that he is glad the #MeToo movement has died down in the last couple of months. In the same breath, he laments about Chris Hardwick, who was recently accused of harassment, getting crucified for the revelations made by his former girlfriend Chloe Dykstra:

“I’m happy the #MeToo movement has slowed down a little bit. It used to be, “One hundred women can’t be lying.” And then it became, “One woman can’t lie.” And that became, “I believe all women.” And then you’re like, “What?” Like, that Chris Hardwick guy I really thought got the blunt end of the stick there” explained the actor.

MacDonald further explained that he doesn’t necessarily agree with people vilifying celebrities for the rest of their lives. He looks back on the old days wherein people can make mistakes and grow from them:

“The model used to be: admit wrongdoing, show complete contrition and then we give you a second chance. Now it’s admit wrongdoing and you’re finished. And so the only way to survive is to deny, deny, deny. That’s not healthy — that there is no forgiveness. I do think that at some point it will end with a completely innocent person of prominence sticking a gun in his head and ending it. That’s my guess. I know a couple of people this has happened to.”

Following the backlash surrounding his comments, MacDonald appeared in Howard Stern’s radio show and made yet another insensitive comment. During the show, Stern brought up MacDonalds comments about the #MeToo movement. MacDonald said he feels sorry for the victims – only those who have Down Syndrome not to:

“You’d have to have Down syndrome” not to feel sorry for the victims of sexual abuse. ” quipped MacDonald during the radio interview.

With all the faux pas committed by the actor, the fate of Norm MacDonald has a Show remains on the balance. Thus far, Netflix has yet to make an announcement about the series.

Norm MacDonald has a Show is scheduled to be released this week on September 14, 2018.