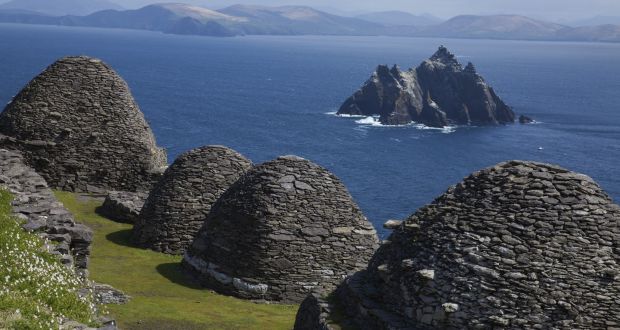 YouTuber Devinsupertramp got a chance to visit the Star Wars location of Ahch-To known in the real world as Skellig Michael off the coast of Ireland. Check out some of the history and beautiful scenery this particular location has to offer in the video.

As for the location itself, it’s the location where Rey finds Luke Skywalker now living as a hermit having given up being a Jedi after what had happened with Kylo Ren when he was still known as Ben Solo. The island itself is for Luke as what Dagobah was for Yoda and Tatooine for Obi-Wan.

As the video explains Skellig Michael was uninhabited before a monastery was founded there in the 8th century. The monastic site on the island is on a terraced shelf 600 feet above sea level and consists out of dry-built corbel constructions. A system for collecting and purifying water in cisterns was developed because no fresh water source was available to the monks. It has been estimated that no more than twelve monks and an abbot lived here at any one time. The steps we see in the films were also carved out by the monks. After the Middle Ages, the site was abandoned again and became recently a Unesco World Heritage site.

You can tour Skellig Michael during the summer season (May to October), but for safety reasons during wet or windy weather, you will not be permitted to climb the steps of the Monastery so plan your trip out carefully. If you are interested in booking travel to Ireland check out this site to book your accommodations you’ll want to get to Portmagee in order to get to Skellig Michael and this site for a list of private tour operators that can get you to the Island and hopefully when you go The Force will be with you and the weather will be perfect.