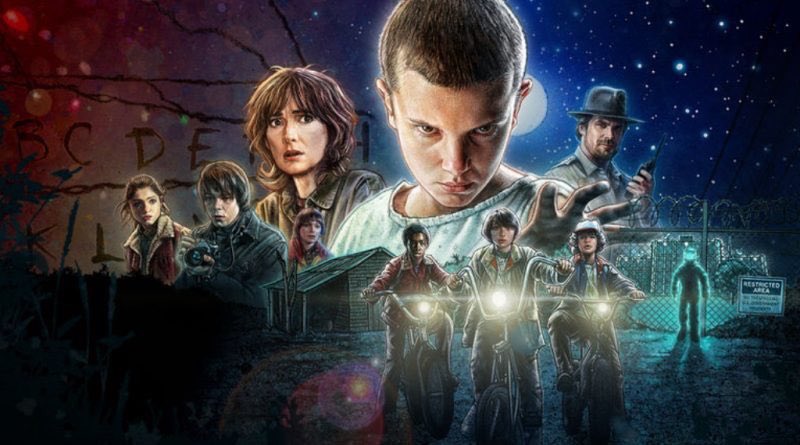 Suspense driven science fiction tales told from a child’s perspective have been a common trope for decades, courtesy of Steven Spielberg who masterfully crafted the phenomenon. The Duffer Brothers, creators of Netflix’s Stranger Things, have spoken on the show being a love letter to the likes of Spielberg, Stephen King, and John Carpenter. At first glance, it looks Spielbergian in every sense — the alien motifs, curious kids, semi-clueless parents, and poignant humor. However, King and Carpenter are visible, as well. So much so that there are at least two scenes in the eight hour run pulled directly from the latter’s Halloween. Everything mixes perfectly for a fascinating story, sold on the backs of an incredibly talented cast, and a well-written narrative.

The show begins with an intense game of Dungeons and Dragons, where we meet the four kids responsible for carrying us through the journey ahead. Their evening of school-night gaming comes to a close, but not all make the bike ride home safely. What follows is the disappearance of Will Byers (Noah Schnapp), and a mother’s desperate attempt to find answers. The mother, brilliantly played by Winona Ryder, isn’t alone in her seemingly crazed search, as the young boy’s friends mount an investigation of their own.

The kids, Mike (Finn Wolfhard), Dustin (Gaten Matarazzo), and Lucas (Caleb McLaughlin), shine. After Will’s disappearance, the three come across Eleven. She’s a mysterious and powerful young girl, nicknamed El, whose endearing and emotional performance by breakout Millie Bobby Brown will leave viewers in awe. Her understanding of the world is beyond childlike simplicity, as she discovers friendship, honesty, and the power of keeping a promise. El’s story, told through flashbacks, rivals the over-arching narrative’s wonder, while putting her mystique into full perspective.

Hawkins, Indiana Police Chief Jim Hopper (David Harbour) is another standout character, complete with a moving performance. He’s the typical drunkard, arriving late to work and popping pills on the job. However, Hopper’s concern for Hawkins’ citizens, and his incredible instinct, removes any doubt of his competence. His story arc is one that often falls into cliches. Yet, much like many of the other characters who face the same, the generic tropes pay off nicely by story’s end.

Other supporting characters, Will’s brother Jonathan (Charlie Heaton), Mike’s sister Nancy (Natalia Dyer) and her group of friends fill out the core of the cast. It’s the usual 80s high school drama, founded in endless cliches. Again, it pays off, as all doesn’t conclude in a manner audiences familiar with the genre would expect.

Storytelling is key and Stranger Things nails it above all else. The alien mystery is shrouded in ambiguity, even as the season comes to a close. But this isn’t a fault. The rules of the world are established early on, and done so in such a manner that allows for adjustments whenever a new wrinkle is added. Science, both pure and theoretical, make up these various wrinkles. The explanations behind each are simple, yet smart. Which brings us to another highlight of the show’s first season.

It’s simple storytelling that’s smartly told. The narrative itself is anything but elementary. However, the clever use of flashbacks and visual cues brings its complexity down to size. Which is also a testament to the show’s expert pacing. Stranger Things strays from the typical 13-episode run of a Netflix show, as it lasts only eight “chapters.”

Every minute matters, not a second is wasted. It’s a good thing, too; the 80s vibe feels authentic, and such care is given to the little details. The costuming, technology, lingo, and the music mesh together perfectly. If you’re on a nostalgia trip for E.T. and The Goonies, look no further. But it doesn’t stop there, the opening theme… Can a show earn an Emmy from the title sequence, alone? Stranger Things deserves such an honor and so many more.

From the title sequence, which sounds as if the themes of Halloween, Twin Peaks, and X-Files made sweet love, to the final moments, this gripping tale holds tight and never lets go. Shows like House of Cards and Orange is the New Black shaped binge-watching culture. Stranger Things proves why it works so well. It’s like reading a Stephen King novel. Page after page turn keeps you on edge, yet the passing of each chapter is unnerving. Viewers will want to know how it concludes, but the finale is an enemy you’ll want to keep at bay. The longing for the next installment is immediately felt once the credits roll.

Stranger Things has upstaged Pokémon Go as the talk of the town, offering a unique kind of addiction. One that’s sure to raise the bar for the many genre projects currently in development. The work of the Duffer Brothers has set a new standard, don’t be surprised if the production to meet or exceed it is Netflix’s Season 2 renewal.