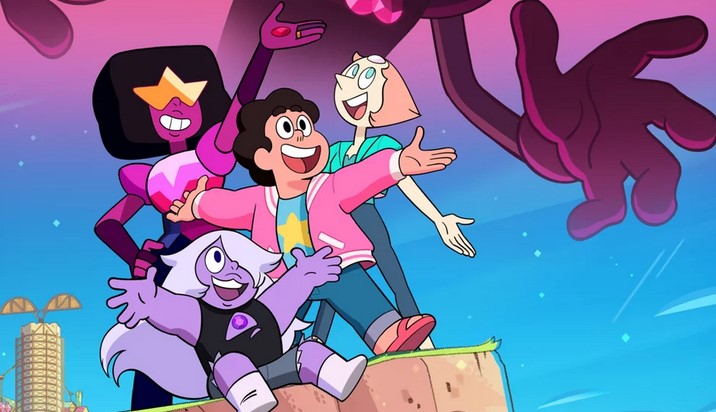 With the conflict with the Diamonds wrapped up and all the corrupted gems fixed, a lot of people thought that was it or Cartoon Network’s Steven Universe. What’s interesting is, show creator Rebecca Sugar still has more to tell, and we just got our first poster for Steven Universe the Movie.

We don’t know much about the plot yet, but the movie does come with the tagline:

“Steven thinks his time defending the Earth is over, but when a new threat comes to Beach City, Steven faces his biggest challenge yet.”

If you look at the poster, you can see that each of the Crystal Gems still has their form from the last episodes of Steven Universe, but the biggest change is probably with Steven himself. Steven looks to have grown significantly, and he’s ditched his usual garb for a blue star shirt and a pink jacket. He’s still wearing the classic flip flops though.

Looking at the villain though, we don’t really know who she’s supposed to be. White Diamond was already pretty powerful in her own right, but we don’t know what to expect with this new baddie who looks like Jenny from My Life as a Teenage Robot.

Hopefully we’ll get a full trailer come SDCC 2019 later this month, plus a release date.

No release date has been set for Steven Universe the Movie, but we should expect it to come to Cartoon Network sometime later this year.