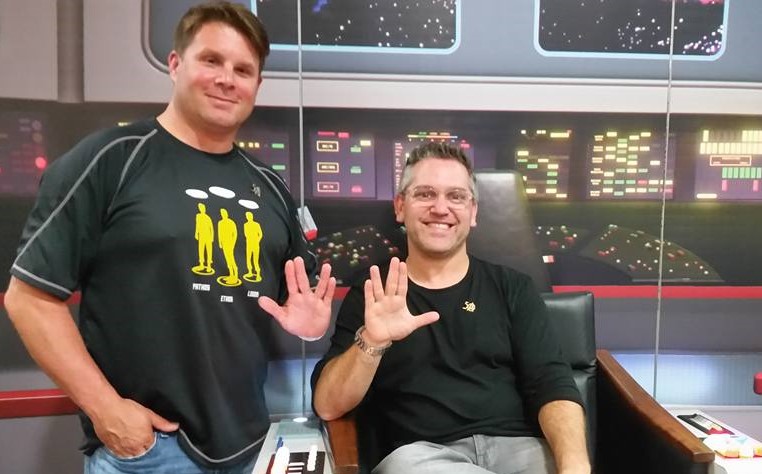 With Star Trek Discovery set to reveal itself in January of 2017 (filmed in Toronto), it was really important to get a sense of who is the executive production team behind this latest exciting installment in the franchise. Rod Roddenberry is heir to an indisputable sci-fi legacy while Trevor Roth has a tremendous sense of creative vision for this company. I was most fortunate to be able to sit back with this Dynamic Duo and find out a little more about their decision-making style, philosophy and how Roddenberry Entertainment works.

“Which one is Adam West?” Roth quips.

“Fine … then I’m Ben Affleck.” Roddenberry affirms with a fist on the table.

The affable, easy humour in the room reveals that it’s not just a relationship of business partners; there’s a deep-seated familiarity between these two men that shows a sharing of vision but also of trust.

“We went to high school. We’ve known each other since our voices dropped!” Roth answers when asked how they got together. “I spent a lot of time over at their house. Majel Barret was like a second mom to me. A smack on the ass or a pinch on the cheek – whatever I needed!”

The good humour is tempered by the solid partnership evinced by these two diverse visionaries. Imagine sitting in a room with the son of the creator of Star Trek while discussing the creative future of the media company with him and a business partner who shares a clear corporate direction. It’s a very heady experience to trade jokes with these guys, and one that seems to hit all the right geek pleasure points to anyone within earshot of the conversation.

Especially when it comes to talking about films like TrekNation. If you haven’t seen this film, then you’re missing out on some of this trust that I’m talking about. It’s a film about a son discovering just what his father’s creation meant to the legions of Star Trek fans in the world and why he couldn’t see it before. It’s bold, brave and actually invites the viewer into the Trek franchise and Roddenberry’s own family in a very unique way.

“Thank you. I’m very proud of the work that we all did. It wouldn’t have happened without any number of us doing our part. Trevor came on board – and when he came on board he really moved it forward.” Roddenberry observes.

“I gotta give a lot of credit to Rod and to the director, Scott Colthorp for putting a very honest look out there. But really for Rod; he looked for all sides of this man that he was exploring. It’s a brave thing to do to look at all sides of his father.”

Not content to rest on laurels, Roddenberry Entertainment is constantly pushing itself forward to discover new ways of making the various facets of its organization exciting and relevant in today’s world.

There are different aspects of Roddenberry. There’s Roddenberry Entertainment, which handles all the new media offerings including films, comics (Days Missing) and, of course, great science fiction; but there’s also Roddenberry Adventures, which includes exploration, discovery and opportunities to see what unexpected parts of the word there are to see. Then, you have the Roddenberry Foundation, where the search to improve the human experience is furthered into new philanthropic ways. Even though these may seem diverse, they ultimately have the same common theme: new frontiers.

It’s an awesome package that really celebrates Gene Roddenberry’s vision but incorporates it in new and different ways for the 21st century. Trevor and Rod addressed these issues separately.

Roth observes: “From the entertainment side, our mission is really simple. We want to provide great science fiction to the world. We recognize that in today’s environment, we can do that in so many different ways. We can have a podcast that talks Star Trek with Mission Log; we can go to the world of comic books with Days Missing; we can do experimental films like White Room 02B3 or great documentaries like TrekNation. At the same time, we can go back to the legacy that Gene left us and talk about the history of great science fiction with the Roddenberry Archives. It’s a great sandbox to be playing in.”

“I’ve always had a passion for exploration – not thrill-seeking – but really doing things that expose you to how beautiful our planet is. So I would always go on trips – I’m an avid SCUBA diver and it started with the Dive Team but half of our stuff wasn’t in the water! All of us out there who watch STAR TREK really know the idea of travelling to exotic places. We can do that here on Earth. We run the full gamut of things to simply being a community and having walks in the park to the fantastic, like the Zero-G Flights with George Takei,” Roddenberry added.

Rod talked more about the philanthropy side of the company, namely, the Roddenberry Foundation that also sees the company seeking out new ways to improve the lives of people on our planet.

“It’s really interesting.” Roddenberry says. “The foundation is an organization that’s trying to make that future we see in STAR TREK a reality. So we find organizations, institutions and individuals who are working towards the advancement of our species. They want to solve global challenges – not just treating an issue but finding a solution for it. And we understand that might not be something that happens right away; it might take ten years, twenty or fifty, but we honestly believe that systemically changing something is really important.”

Roth agrees emphatically. “If our entertainment is able to inspire and our Adventures is able to introduce people to the world around them, then the Foundation is what allows them to change the world for the better.”

It’s a very cool paradigm for a company. Not only does the company seek to entertain, but it also educates and inspires. But it is built on mutual trust but also on the understanding that the message behind the great fiction that is STAR TREK is the value that fans really appreciate.

“Inspiration comes in different forms. A lot of inspiration can come from just understanding who we are and pure explorations of the human condition. Other forms can be just simply the beliefs that ‘I can do this’ or ‘I can be’. Our entertainment tries to incorporate and explore all of that.”

It’s very inspirational to hear these two partners explain their vision while also recognizing their strengths and the way they work together.

“We do well what the other one doesn’t.” Roth puts in. “We complement each other.”

Roddenberry nods in agreement. “Complement each other’s strengths. Yeah – that’s a good way of looking at it. Trevor lets me handle the Foundation and the Adventures and he really gets what Roddenberry is about on the entertainment side.”

That’s the executive production team of Star Trek Discovery and they’re just cool. But clearly, they’re more than that. They’re the team behind a company that has a clearly defined mission and vision and with what we already know about this awesome-looking extension of the franchise, we can very easily see the influence of their philosophical perspective.

Roddenberry Entertainment is more than just Star Trek… and Star Trek Discovery promises the best of Roddenberry; it’s a modern blend of ideals and entertainment that is very optimally packaged for the 21st century and stands ready to usher in a new age of sci-fi entertainment.