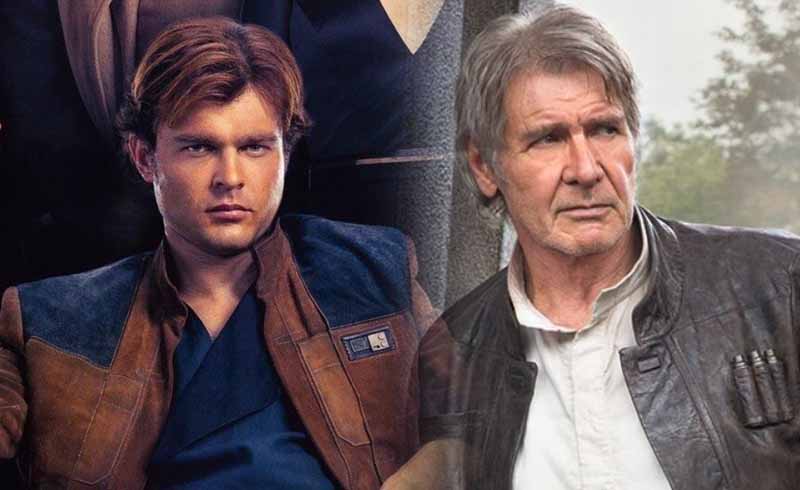 Solo: A Star Wars Story premieres in just a few weeks and though the character focuses on Han Solo, original actor Harrison Ford has made it clear that he wants nothing to do with the film. Now it looks like he has taken the time to give a surprise visit to the new Solo, Alden Ehrenreich.

The only thing better than one Han Solo is two. ❤️ Harrison Ford dropped by @CameronMathison's interview and surprised #SoloAStarWarsStory star Alden Ehrenreich! The full interview will be on https://t.co/issuFApt4j tomorrow. 🙌 pic.twitter.com/5hy4GoZrhg

Ehrenreich previosly said that he met up with Ford before shooting started for Solo.

However, according to the young actor, Ford didn’t really give him any strict advice. He told SyFy Wire:

“We sat down for lunch before shooting and he told me, ‘If anyone asks, tell them I told you everything you need to know, and you’re not allowed to say anything.’”

This nonchalant approach to the character was also Billy Dee Williams’ advice to Donald Glover. The Atlanta star also looked for advice on playing Lando Calrissian before working on the film. Instead of giving Lando some complicated backstory or personal rules, Williams just told Glover that the essential rule to playing Lando is simple: Be charming.

A lot of pressure is undoubtedly on Ehrenreich to deliver a performance worthy of following Harrison Ford, and people who have already seen the film have been applauding on how solid Ehrenreich’s performance as Han was. Hopefully the majority of the fans will agree when the film comes out; critics loved Star Wars: The Last Jedi, but half of the fanbase actually couldn’t stand the film.