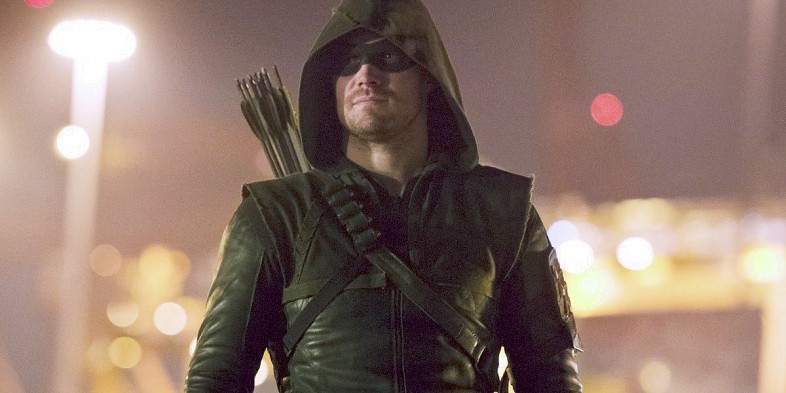 There’s an ongoing mystery that’s surrounded Arrow since the show’s introduction in 2012: How does his hood stay on in combat and parkour sequences? It never comes off, it never seems to impair him or his aim; so what’s the secret? Over the years, the question’s been asked, but answered in round about ways. Magic can’t be keeping it in place, nor can any amount of will power. There’s a trick, and one fan went hunting for the truth.

Youtube user Friggin Boom Toys made a video in a mock-up of the Green Arrow’s suit. He conducted a test of sorts, climbing, performing parkour and various stunts to determine the suit’s practicality. On its lonesome, it doesn’t hold up well. Picking up speed of any kind knocks the hood off, so, of course, acrobatics and fighting present problems. Curious about how Stephen Amell and the stunt team manage, Friggin Boom Toys contacted crew members to find out.

He reached out to Arrow fight choreographer James “Bam Bam” Bamford, and was told “[they] staple it to his scalp. It hurts, but is very effective…” It’s quite a funny response, actually, but completely useless.

Next up to bat was stunt coordinator J.J. Makaro who also replied in comedic jest. “[It falls off] me too, which is why he is a superhero and you and I aren’t.” There’s obviously an Arrow-spiracy where none of the crew wants the world to know the truth about the hood.

However, one person on the show’s production is out of the loop. Friggin Boom Toys was able to get in contact with costume designer Maya Mani who revealed the following:

“The Arrow hood stays on with the help of a toque (a small hat, like a beanie) and some velcro. We tried a headband but found that it moved around too much. This costume and most of the others (Deathstroke included) are designed with stretch panels to allow the actors and the stunt performers full range of movement.”

Simple answer to a simple question. If you’re thinking of designing your own Arrow-inspired suit, now you know what’s necessary should testing it out become of any interest. Check out the video in full below:

Now if only we were to find out what goes into Grant Gustin taking off and putting on his Flash cowl. It’s never shown, as there’s always a clever cut away, which is especially noticeable when he meets Kara in the Supergirl crossover. This is another mystery waiting to be solved.