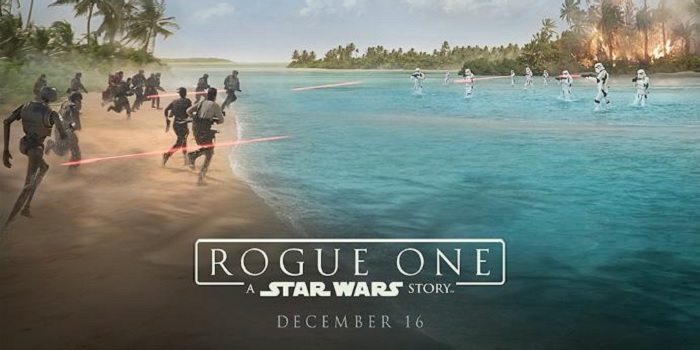 Gareth Edwards is tasked with a mission fraught with more risk and danger than the one at the heart of Rogue One. J.J. Abrams won back the masses with his nostalgia seeped franchise reinvigoration, The Force Awakens, but it’s the Godzilla director who must steer this ship through that film’s afterburn and into unknown territory for this galaxy far, far away.

Amidst whispers of re-shoots (commonplace on a production of this size), and rumoured demands from a studio with more power than Darth Vader, Rogue One is the first film to veer away from all things Skywalker and launch the Star Wars extended universe. That’s more pressure than that which was applied to the neck of Raymus Antilles at the start of A New Hope.

It’s the lead up to that iconic moment which provides us with our plot structure for Rogue One. Taking on the strong female role that this universe is wonderfully embracing (as well as an ethnically diverse cast) is Felicity Jones, as Jyn Erso. A young criminal-come-warrior intrinsically linked to the weapon she’s entrusted to steal the plans for — the Death Star.

Recruited by Mon Mothma (Genevieve O’Reilly) to be part of a team who go by the titular call sign, comprising of pilot, Bodhi Rook (Riz Ahmed), rebellion soldier, Cassian Andor (Diego Luna), sarcastic droid, K2SO (Alan Tudyk), the force attuned fighter, Chirrut Imwe (Donnie Yen), and wise cracking munitions man, Baze Malbus (Wen Jiang). Together they must swipe the blueprints that depict the infamous “small thermal exhaust port,” from under the nose of some familiar faces, and a terrifying new one in the form of Ben Mendelsohn’s Orson Krennic.

Any comparisons with Episode VII can be immediately jettisoned from the nearest escape pod, because although Rogue One has its share of fan serving moments  — the retro aesthetics, an eerily brilliant digital resurrection of Peter Cushing’s Moff Tarkin — it’s a different beast altogether. A surprisingly moving, and beautifully shot one at that.

Gareth Edwards set out to make a war movie, and that’s exactly what he has done, bringing a completely unique vision to a series that hasn’t had a tonal shift like this since The Empire Strikes Back.

He lenses Rogue One in guerrilla fashion; a hand held intimacy and noticeably shallow depth of field that throws you into a Star Wars battle like never before. We’ve been wowed, but we’ve never been to the front line like this. The huge Scarif battle, which makes up the films impressive finale, and is a bit like a Club Med version of Hoth, might share as many moving parts as the Starkiller Base assault from The Force Awakens, but it’s more visually inventive and visceral as anything that has played out on the canvas created by George Lucas.

As with all conflict narratives, we need characters to invest in to ensure that we care about their fate, and although this is prequel stuff, they’re all new personalities, so who lives and dies is never a certainty.

In that regard, Felicity Jones is so much more than a tick box quota filler or Rey clone. Jyn is given a backstory during the film’s opening salvo that provides her with a drive to be the catalyst for the action, rather than being caught up in something because of the will of the force. Her actions are her choice, and Jones makes her strong, charismatic, and fist thumpingly easy to root for.

One of Rogue One’s few missteps is in the choppy way in which it constructs the ‘meet the gang’ set-up; jumping from planet-to-planet, whilst throwing new characters up at a rate of parsecs, feels quite jarring. Thankfully once the script settles down we get a better feel for these Star Wars archetypes.

Riz Ahmed plays Bodhi like an extension of his The Night Of character, all tics and nervousness, but he grows into the film as he’s given more to do. Diego Luna gives good stoic heroic as the potentially duplicitous Captain; whilst Yen and Jiang make an ultimately touching double-act when they’re not kicking ass or quipping. Yen’s Stormtrooper takedown is one of the coolest sequences in the entire film, but it’s also frustratingly brief.

Of the remaining cast, Ben Mendelsohn is almost as impressive as his cape, Mads Mikkelsen gets to spout the important exposition, and only Forest Whitaker fails to impress, hamming it up as a cross between Doctor Robotnik and his character from Battlefield Earth.

When Disney were drawing up their own strategic plans for an all conquering extension of the Star Wars brand, it’s doubtful they imagined they’d launch it with something more impressive than an attack on Alderaan. Undoubtedly Rogue One has its flaws, but it remains an out of this world story told with real world relevance, and if you’re not looking for depth, it’s just a damn fine film.