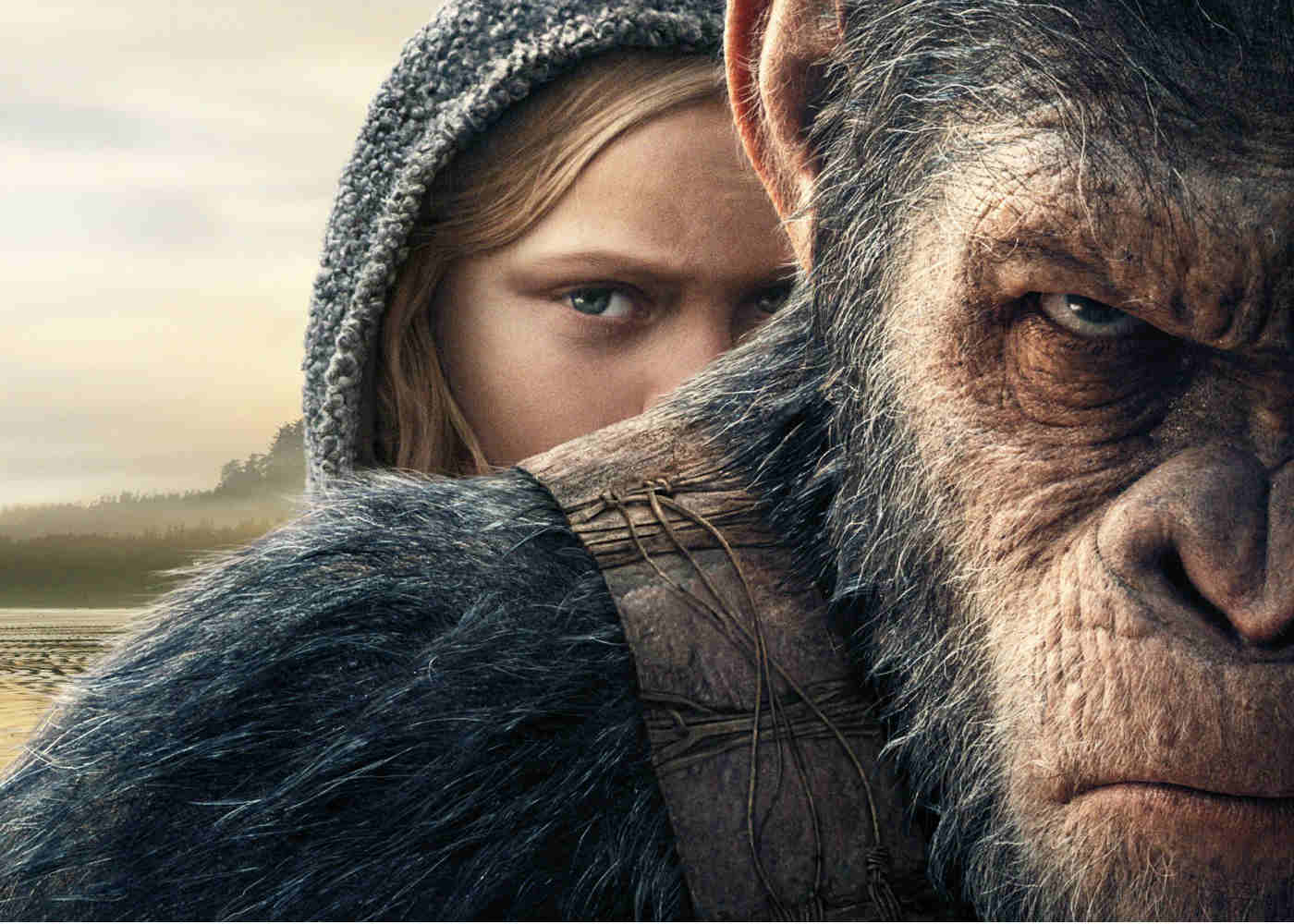 The Apes franchise is that rarest of species; one that incrementally improves as the series evolves. Rise is a study of man’s desire to play God, Dawn was more of a war movie than this installment reveals itself to be, and with Matt Reeve’s staggering chapter closer, he has chosen to create a Western in the mould of Unforgiven, by way of The Great EscAPE, and a film that acts as flawless punctuation to Caesar’s journey. War for the Planet of the Apes is paws down, the film of the summer.

The actions of the traitorous Koba (Toby Kebbell) has escalated the battle for the planet of the apes to breaking point. Caesar (Andy Serkis) and the surviving apes are in hiding, hunted by military men with ‘Monkey Killer” scratched into their helmets. In some cases they’re aided by ‘Donkeys’, the derogatory name given to apes enslaved to the human cause, acting as lookouts, spies, and enforcers.

On the verge of abandoning the desire for peace that had driven Caesar to conflict in Dawn, the community are ready to risk it all in order to find a new home across the desert. However, their cover is blow, and a psychotic Colonel (Woody Harrelson), intent on killing the legendary rabble-rousing ape, triggers a series of events that lead Caesar down an altogether more unexpected and painful path.

In the world of the apes, it is a bleak summer indeed. War is a film befitting of the title, but the turmoil doesn’t necessarily come from battle, with pyrotechnics and explosions taking a back-seat to narratively earned emotion and dramatic conflict.

War’s greatest victory can be found in its characters; subtlety crafted over the course of three movies, it’s only Woody Harrelson’s Colonel Kurtzalike who feels underdeveloped, but who wouldn’t up against the layers of personality and pathos found in Caesar. There should come a time when Andy Serkis is acknowledged for the work he has done with motion-capture performances, but what he and the technical wizards have achieved here is remarkable.

Introduced with tears of sadness threatening to puncture his angry visage, it’s a look that will be reflected in the face of the viewer on multiple occasions throughout War. His fur now greyed, his soul grown weary, Serkis plays Caesar with the fire slightly diminished, the closest to a human that he has ever been, especially the portrayal of the emotional triggers that sets War down its revenge/escape storyline. His arc is not an easy one to watch, with moments of brutality that belie the blockbuster tag, but Serkis ensures that we are invested in this digital creation on a much deeper level than simple astonishment.

It’s not just Serkis who excels. During the franchise the unsung hero has been Maurice, played with little fanfare by Karin Konoval, who is not only a digital miracle to make Caesar appear somewhat bland, but due to the characters reliance on mime and expression, has conveyed emotion in a way that most human counterparts couldn’t achieve with a million years of evolution. There are multiple scenes during which she exchanges little more than a look, and it stirs you to your very core.

Newcomer Zahn is also a welcome addition as ‘Bad Ape’, a loveably Gollum-faced tragi-comic creation, who arrives at a point in the movie when some much needed levity is required from the burgeoning sense of hopelessness facing our knuckle dragging heroes.

Not knowing how War plays out is part of the beauty of the film, but without giving too much away, it’s a movie with two distinct halves; one rides along on the tropes of the very best Western films, think Bone Tomahawk or The Searchers, as a group of riders set out on a journey from which they might not return, before it seamlessly transitions into a prison break drama. The first is the strongest section, simply because we get more quiet time in a film that would work without any dialogue at all. The second is where the human element dilutes what has been so strong before, but you still get some terrific set-pieces, most of which are thrilling because of your investment in the fate of the characters.

This is largely down to Reeves and [Mark] Bomback’s screenplay, which proves that you can deliver intelligent, resonant filmmaking wrapped in the skin of a blockbuster event movie. Heck, the bad guys are building a wall! You don’t get timelier than that.

As a director, Reeves seems to have been able to strike that perfect balance of spectacle, without ever sacrificing the need to create a meaningful story. There was so much more to Cloverfield than the USP, Let Me In was an adaptation that survived on its own merits, and War for the Planet of the Apes is an elegiac piece of timeless moviemaking, which like Caesar, stands head and shoulders above the pack.

Apes Together Strong. Everything about this trilogy capper, from Michael Giacchino’s under-the-skin, behind-the-eyes score, through Andy Serkis’s awards worthy performance, and Reeve’s accomplished direction, are examples of artists at the top of their craft. Devastatingly brilliant.