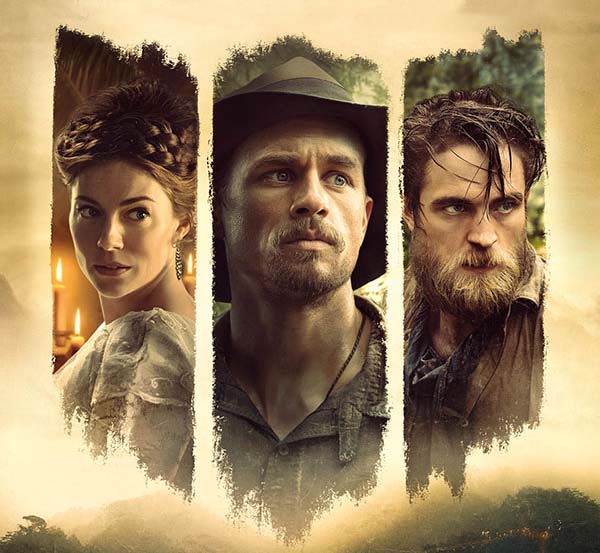 Based on the real life exploits of British explorer Percy Fawcett, embodied here by former Sons of Anarchy charter leader Charlie Hunnam, The Lost City of Z is about his obsessive mission to return to the ancient civilisation he uncovered. The trouble is, the first time around it nearly killed him, as well as his travel companion, Henry Costin (Robert Pattinson), and left his increasingly frustrated wife (Sienna Miller) and children (the eldest of whom is played by Tom Holland) to live without him for long stretches of their lives.

James Gray’s wonderful film charts the there and back again journey of Fawcett, weaving into the narrative a dose of familial strife, and the kind of historical insight you’d normally only find on the Nat Geo channel. Striking a wonderful balance between all of the elements, The Lost City of Z glides along like the boats that carry the exploration party down the Bolivian rivers, taking with it a real weighty sense of adventure.

This comes from the time taken to add stakes to Fawcett’s actions; he has been unlucky to avoid battle during the war, so his lack of medals and a dark family secret mean that he’s not taken seriously by the twirly moustached brigade who run the military. When he’s offered the chance to map the uncharted South American jungle, he sees it as his fight to save his name, and more importantly, that of his family.

That element of the story is a bit of a mixed bag. Isn’t it about time that Sienna Miller was given more to do than simply be ‘fretting wife’? Obviously this is set in a time when men were men, and, oh you know the rest, but she’s essentially playing the same stay at home character she did in American Sniper. Miller is fast becoming a very good element of any film she appears in (Live by Night), so it’s frustrating to see her left behind, and not just in narrative sense. Similarly, Tom Holland appears too late on and quite fleetingly for his intended impact to really resonate. Robert Pattinson is much more successful as Fawcett’s right-hand-man; shrouded in facial and a quiet dignity, it’s a very unshowy, effective role.

The film rests on the shoulders of Gray’s atmospheric direction and Hunnam’s most assured leading man role to date. Since stepping off the Harley Davidson he hasn’t really convinced as either action star (Pacific Rim) or aristocrat (Crimson Peak), but with his British stoicism perfectly honed, he makes Fawcett an intriguing character. His motivations are clearly defined, and Hunnam plays him as sympathetic and human, rather than a crazed explorer convinced that he’s right in the face of the doubters. It’s an important creative choice that enables the audience to immediately empathise with Fawcett, to ensure that they’re willing to take this emotional journey with him.

The look of the film is also key to that seduction; when the journey is difficult, you can feel the stench of death on-screen, or the haze of the fever like temperature, but juxtaposing that are some beautiful locations, most of them intimate in order to maintain the claustrophobic nature of their funnel squeezed trip down a river fraught with everything from jagged rocks to cannibal tribes.

With a foundation of truth that makes you want to undertake your own Google led discovery mapping out Fawcett’s life, and a Mosquito Coast survival vibe, the meandering beauty of The Lost City of Z is old fashioned adventure movie-making at its very best.