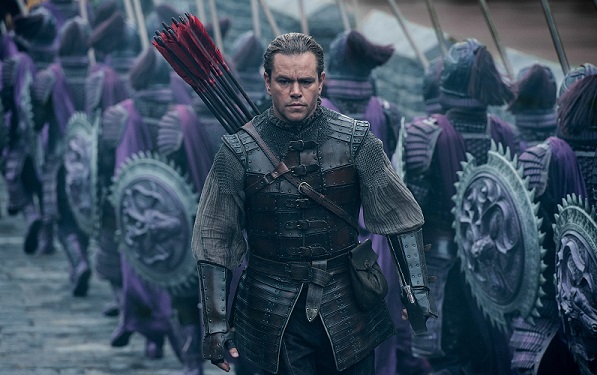 There’s plenty of intrigue behind, and over The Great Wall. Budgeted at a colossal $135m, it’s the most expensive Chinese production ever, emerging from an industry with a burgeoning importance at the Global box-office. The director of House of Flying Daggers, and Hero, Yimou Zhang, has chosen it as his English language debut. And finally, there’s the ridiculous accusation of whitewashing that has hung over the casting of Matt Damon.

Thankfully this is something which can be dismissed early on, because his character turns out to be more of an accidental tourist, gawping at events as they unfold around him, coerced into heroic acts by Chinese warriors, and female ones at that. As the filmmakers have pointed out, this is fantasy, not a historical recreation.

The story is relatively simple, and is based on a Chinese Legend that tells of a horde monsters that attack The Great Wall of China once every few decades. Caught up in the sea of beasties are William (Matt Damon) and Tovar (Pedro Pascal), two European mercenaries who are travelling Asia in search of a mythical black powder. When the two become imprisoned within the confines of the wall, they’re forced to question their own motivation and help defend the structure from thousands of spruced up Dilophosaurus called Tao Tei.

Political controversy is the least of The Great Wall’s problems; in fact, the whole non-debate might be more interesting than anything that takes place in the films refreshingly brief run-time. If you were told you’d be watching a creature feature from one of the most visionary directors in recent times, that last thing you’d expect it to be would be dull.

A lot of the blame has to be levelled at the performances, which you sense were one-take efforts because the focus went on the CGI. Matt Damon, so brilliant in The Martian, borrows Russell Crowe’s lingual gymnastic failings from Robin Hood, which is a mix of theatrical English, Irish, with the odd trip to Scotland thrown in. There is no life in his readings;  whether he’s stating that “I’ll take its hand, so someone can tell me what I’ve just killed” or attempting to emote with Tian Jing’s impressive Commander Lin Mae, it’s crushingly disappointing stuff. Don’t get started on the ‘comedy’.

To be fair to all of the actors, the script is littered with some clunking dialogue. There’s a scene in which Damon and Pascal are taking in the chaos of their surroundings, and they begin to describe what’s going on, as if the audience cannot see it with their own eyes. ‘They’re the archers. They’re in red’, as we look at an archer dressed in red armour. So on and so forth.

On the plus side, although this lacks any of the subtlety of Zhang’s back catalogue, here seemingly attempting the throw as much and see what sticks mantra, which is so prevalent in the Hollywood epics that The Great Wall wishes to emulate, there are still some moments of stunning visual inventiveness.

The huge sets are impressive, but it’s the way in which the camera weaves over the battlements, or around a turret, that gives the film its scope. There is so much going on that Zhang can navigate multiple locations with one swoop of the lens. The shot composition is masterful.

The monsters might be a tad PlayStation 2 in how they’re rendered, but a couple of the set-pieces in which the soldiers attack them make up for any shortcomings. There’s a Cirque Du Soleil high-wire bungee assault from atop the wall, and a sequence in which Damon is fighting in the battlefield mist using whistles for orientation, that stand-out from the rest of the serviceable action.

The Great Wall feels like the middle section of a longer movie, one in which Willem Dafoe is given more to do than stand in the background pulling facial expressions. Think the Battle of Helms Deep filtered through The Mummy Returns, but for a film in which the titular landmark is made of stone, there’s just too much about this that’s wooden.