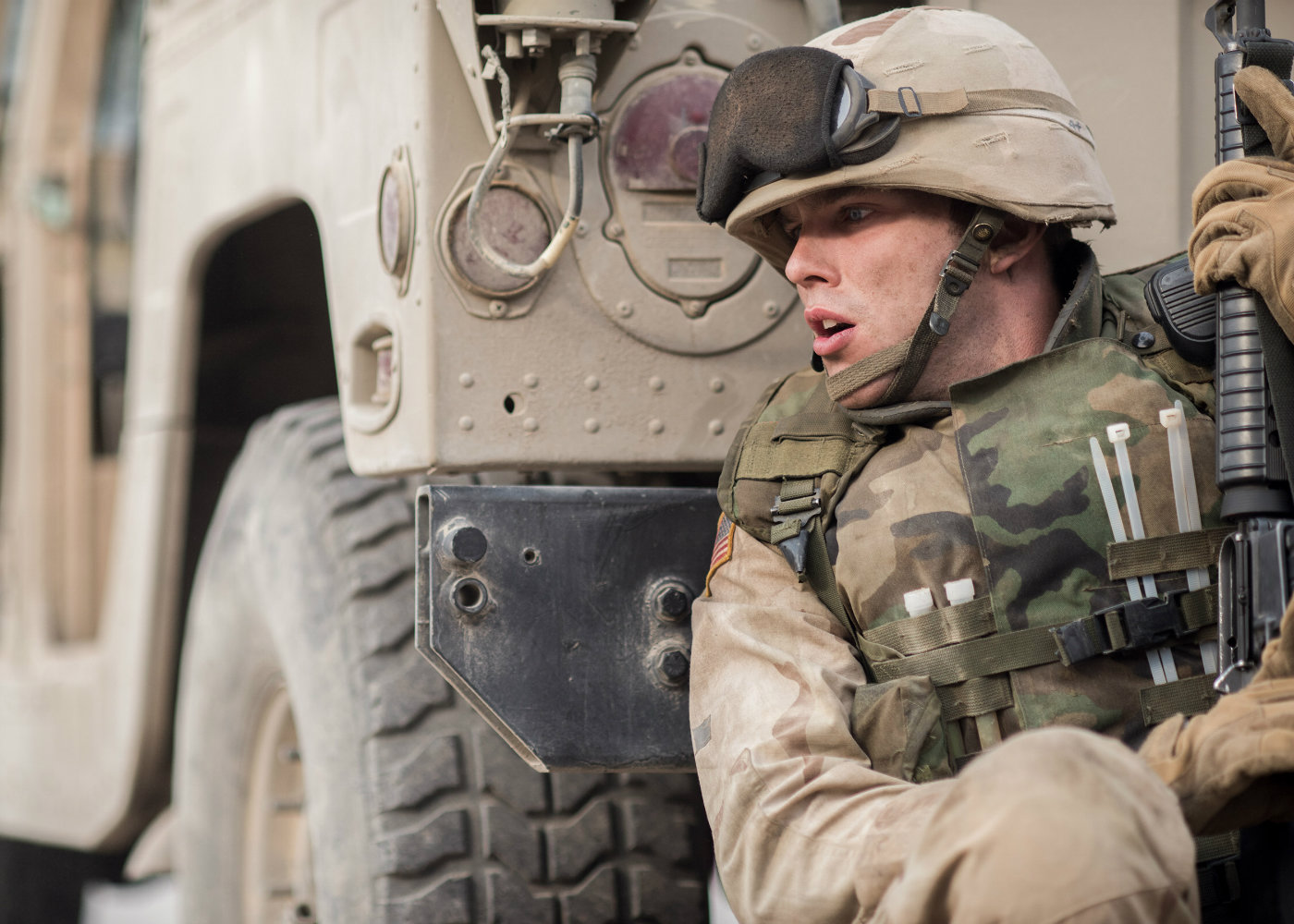 Sand Castle is a familiar story. A copy and paste parable from any cinematic war text in which a young man finds himself out of place in a country he has no right being in. How fatigued you are from exposure to everything from Full Metal Jacket, via Black Hawk Down, and the most comparable narrative, Jarhead, will ultimately decide what you take from this Netflix original.

We’re introduced via voiceover, a storytelling device that is quickly abandoned, to Matt Ocre (Nicholas Hoult), a studied young man who signed up for the infantry in July 2001 as a way of paying his college tuition fees. What he wasn’t to know is that within two months of doing so, the landscape of the world would change forever, as two commercial airliners were flown into downtown New York.

So here he we find him, in a Baghdad outpost, slamming his own hand into a car door in order to get sent home from the desert war. It’s a ruse that ultimately doesn’t work, as Matt is told that grunts have been ordered into battle with much worse than a badly bruised hand. His platoon, led by Logan Marshall-Green’s sensitive Sgt. Harper, are made up of archetypal  I-Rak soldiers, all male posturing and combat hungry, and well aware that their contemplative teammate isn’t made of the same stuff. When the platoon is asked to head into volatile territory in order to fix the water supply of the local people, they’re thrown headfirst into political and military warfare that’ll change them forever.

There’s a lot to like about Sand Castle, the English Language debut for Narcos director Fernando Coimbra, and much of it comes from his stylish lensing. An early single take shot in which the soldiers navigate their way through the concrete jungle using smoke as camouflage is an effective way of pushing the audience into the midst of battle. At one stage a character says ‘it can be beautiful,’ referring to the landscape of war, and with the burning oil fields and dust flecked vistas, it’s hard to disagree.

Not nearly as successful are the characters who’re meant to be our companions on this journey. Nicholas Hoult is very good, but his evolution is a little bit tick-box, right up to his rather rushed final reel epiphany.  Marshall-Green is possibly the most well drawn of the roll-call, as we get shards of his home life through strained calls home, with a much more subtle arc than any of the others. Henry Cavill does little but hulk up and act gruff from behind his beard, and Glenn Powell is so good in Everybody Wants Some!! and Hidden Figures, that his one-note performance of obnoxiousness is rather disappointing.

There are some welcome anti-war threads running throughout, but it’s never forced down the viewer’s throat, with shortages of soldier armour dropped in as a throwaway line, and despite Matt’s liberal outlook on events, he’s never presented as an objector, just a realist. Sand Castle becomes a microcosm of war, and it’s more successful because it doesn’t set out to be an all encompassing polemic.

A decent slice of a tale oft told, Sand Castle doesn’t really use its platform to tell us anything new about the war in Iraq. Despite a couple of scenes that ratchet up the tension, there’s nothing you won’t have seen on a previous tour of the cinematic battlefield.