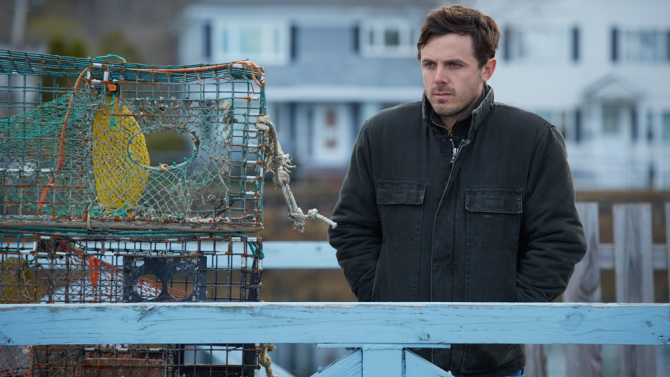 Casey Affleck has a CV as impressive and eclectic as anybody working in Hollywood today. An actor with The Assassination of Jesse James by the Coward Robert Ford, Gone Baby Gone, and Aint Them Bodies Saints, on his resume, yet he still manages to stay off the popular radar. Which is probably why he’s always so devastatingly good as characters that blend into the background of life. But it’ll be hard to ignore his turn in Kenneth Lonergan’s superb family drama, Manchester by the Sea, as its grief manifested, and will hit you like a face stinging sea breeze.

Lee Chandler (Affleck) works as a building janitor, fixing leaks, shovelling snow from the entrance, getting hit on whilst unblocking a toilet, all with minimal fuss and very little human interaction. On a day like any other, Lee receives a call telling him his older brother, Joe (Kyle Chandler), has suddenly died. He must return to his hometown of Manchester to face up to some ghosts from a past life, and the realisation that he has been named legal guardian of his nephew, Patrick (Lucas Hedges).

Manchester by the Sea is a real actor’s piece, and as such there’s not a single performance that doesn’t strike a chord. Chief amongst those is Michelle Williams, who with very little screen time offers up an initial turn of affability, especially during the numerous flashbacks  that are used to drip-feed information as to why Lee is such a broken soul. In the present day, she is staggeringly good when confronting her own demons. Her interactions with Affleck are one of the reasons why he is so good; a distressing random encounter towards the end of the film is barely watchable due to the anguish depicted.

It’s peak Casey Affleck from the off; he does the whole head bowed, insular suffering like few others, and keeps Lee’s Catholic guilt bubbling away beneath the surface, only rearing its head when he needs a cathartic bar fight rather than a one-night-stand. Throughout the film he’s captivating, but there is one sequence in particular, set in a fire station, in which for want of a less hyperbolic word, he’s astonishing. It’s bleak, hopeless, end-of-his tether stuff, with barely a word uttered, and it hangs over the film from the minute it happens.

It all sounds a rather depressing experience so far, right? The biggest surprise then is how funny it all is, and not in a macabre way, just straight up entertaining. A lot of this is down to Lee’s awkward social interactions, but newcomer Lucas Hedges also impresses due to his chemistry with Affleck. The two of them bash heads, engage in frank, often hilarious discussions that Patrick probably couldn’t have had with his own father, and display a clear bond which provides a shard of light for them during this bleak chapter in their lives.

Such a disparate range of emotions is why this feels like a genuine reflection of life. The film is nuanced, intimate, and underplayed, so-much-so that moments of drama unspool with the score drowning out any dialogue. Reactions are all that’s necessary because of the time taken by Lonegran to write rounded, developed characters.

Unshakable in the immediate aftermath, but unforgettable in the long term, Manchester by the Sea is as an indelible a piece of cinema as you’ll ever see.