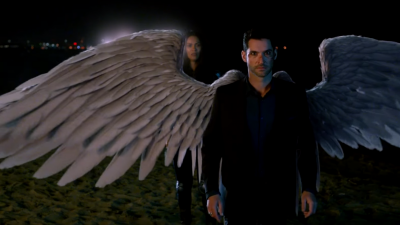 Lucifer was back this week with a new “flashback episode” similar to the one we saw earlier this year with Linda’s husband, but this time it doesn’t take place entirely in hell. (By the way, if you missed ‘Off The Record‘ we highly suggest going back and watching it.) With that said what did we learn from the Devil’s return to the City of Angels that we didn’t already know?

The episode starts with Lucifer in 70’s attire on the streets of LA having sneaked away from hell for a return visit to LA. In true Lucifer fashion, he, of course, finds the need for fun irresistible and soon finds himself in his sexual fantasy surrounded by women. His joy is short lived though since Amendiel followed to return him to the Underworld. However, Amenadiel’s plan doesn’t go as planned when he finds himself shot and his necklace stolen from him. This leads him to make a deal with Lucifer to help find the necklace which is “priceless beyond measure.”

They do end up finding the necklace with a few close run in’s with Chloe, perhaps eluding to his fathers meddling that Chloe was indeed born for him, yet we still have no idea why?

Other than Lucifer’s powers being healthy enough to start a car on his own and seeing Maze adjust to life on earth the episode is one you necessarily have to watch to keep up with this season. We mainly get a background on all the characters that show how much they’ve grown since before Lucifer bought LUX. However, if you happen to love the quick wit of Lucifer and his awkward and sometimes strained relationship with his brother than it’s totally worth the watch even if it does feel slow at times.

As far as standalone episodes go it wasn’t nearly as good as the last one, but it works just fine to fill the winter break lull. As far as the main plot this season we just want to get back to Sinner Man as we now know as Marcus Pierce aka Cain the firstborn son of Adam and Eve and apparently now an immortal who has a grudge against Lucifer.

What did you think of this standalone episode of Lucifer? Did you like it? Are you ready to get back to the main plot? Leave your comments below.