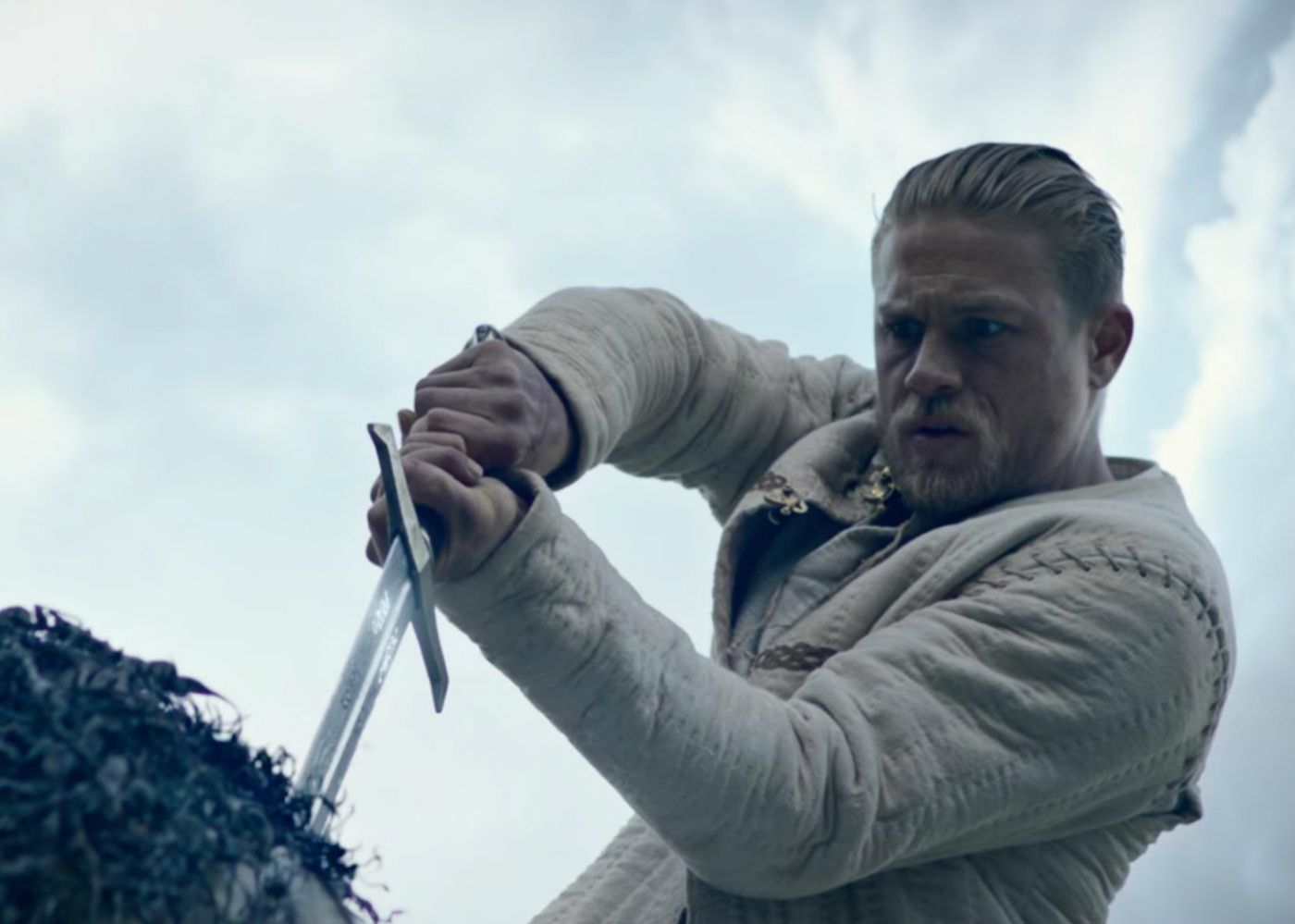 Guy Ritchie‘s take on the Arthurian legend has found getting a release date as difficult as pulling a sword from a large slab of stone. Initially pencilled in for July 2016, King Arthur: Legend of the Sword has been bumped around the calendar, instilling the kind of confidence in a project that’s usually associated with an absolute stinker of a film, one which is running scared from Guardians and Aliens. Well here we are, with Arthur (Charlie Hunnam) finally unsheathing Excalibur after almost a year in the can. Is this latest cinematic iteration a sharp reinvigoration of a story that has never been sprinkled with Merlin’s magic outside of the 1963 Disney cartoon, or is it as blunt as we’d feared?

The truth is, it’s a bit of both. At its best when it’s being a Guy Ritchie movie; lads, lads, lads, and loads of hyperactive camerawork, but falling foul to a penchant for bloat and incomprehensible Game of Groans nonsense.

Instead of sitting through a load of origin story tedium, we’re rushed through Arthur’s early life as a street-savvy pick-pocket and general scoundrel, and thrust into his grown up form of Sons of Anarchy’s Charlie Hunnam.

The Court of Camelot is ruled by his uncle, King Vortigern (Jude Law), who robbed him of his birthright and murdered his parents. However, a prophecy tells of the rightful heir returning to claim his place in the Kingdom, which forces Vortigern to have every eligible male in the realm attempt to remove the sword Excalibur from its stone. When a reluctant Arthur manages to do this, it starts a chain of events which aim to fulfill his legacy.

Even if you think you know about the legend of King Arthur, chances are this isn’t the movie you were expecting, for both good and bad.

First and foremost it’s undeniably a Guy Ritchie movie. By this we mean plenty of whip sharp humour, most of which lands, and the kind of frantic editing DNA that he successfully weaved into the Sherlock Holmes films.

So we get lots of flashbacks to facilitate the storytelling, sequences which fast-forward, rewind, and play out like a mini-Rashomon. They’re playful, and effective, especially during the opening exchanges, which set a tone that you might not have been expecting from a historical epic, but you soon go along with it.

His style also bleeds into the action set-pieces, which is welcome amongst the bloat. The prologue is a huge bridge based battle, reminiscent of Peter Jackson’s Lord of the Rings aesthetic, but it’s also kind of dull. However, sequences such as a Camelot foot-chase, featuring roof-top stunt-work, POV shots, and multiple synchronised street showdowns, are pure Ritchie, and infectiously kinetic fun.

What also helps is the stunning score. Now don’t get this confused with the soundtrack, which includes some rock songs that’ll have the puritans shifting in their seats, but Daniel Pemberton’s music, which adds as much to the momentum of the film as Ritchie’s visual panache.

Adding to the Prince of Thieves comparisons is the winning ensemble, who have to do as much as they can with the little breathing time the script allows them to establish character. Djimon Hounsou is essentially embodying the same persona you’ve seen him do a hundred times, though it isn’t necessarily a bad thing, and Aiden Gillen only adds to the cranked up Game of Thrones vibe as a nicer version of Little Finger. There’s also Kill List’s Neil Maskell, who gets a side arc with his son that’s lifted straight from the Little John bio. Together they make a likeable troupe.

As their leader, Hunnam is essentially playing Jackson Teller, and running the Knights of the Round Table as his Olde England motorcycle charter. It’s what he’s good at, but this is hardly a stretch.

The biggest disappointment is Jude Law, not because of his performance, but due to the fact that he’s built up as this Faustian bad guy, only to completely vanish under a layer of CGI which feels like an executive meeting afterthought. ‘Guys, we need a big monster showdown, not a Shakespearean revenge standoff’.

It’s the final third that really derails Legend of the Sword. Already the most iconic sequences – the removal of the sword, the Lady in the Lake – have been underplayed so badly that they’re rendered ineffectual, you’re hoping for it to go out on a swashbuckling high. Nope. What you get is essentially a Linkin Park music video, which feels like watching your friend play The Witcher III for half an hour, oh, and throw in a bit of The Matrix for good measure. It’s a hotchpotch of tedium, which signs off the movie with a whimper.

King Arthur: Legend of the Sword can be summed up by looking at the David Beckham cameo; it’s not as bad as you might have feared, it looks pretty in places, and might put a smile on your face, but ultimately it’s all a little bit silly.