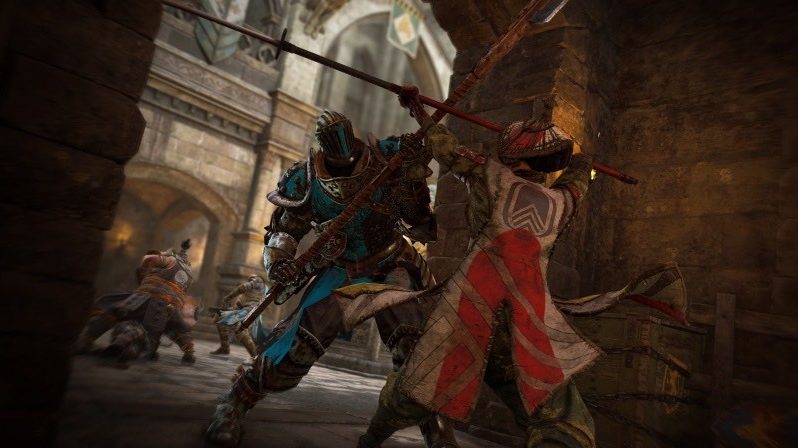 As easy as it is to be cynical about the annualisation of Assassin’s Creed and the milking of the Far Cry name, it cannot be denied that Ubisoft certainly aren’t afraid of taking the occasional gamble. Last year saw the release of two new properties from the French publisher in the form of loot-driven shooter The Division and open world snowboarding game Steep, while Rainbow Six: Siege has become one of the surprise success stories of this generation. Hoping to find a similarly devout audience to call its own is For Honor, which dares to bring swords and shields to the gunfight that is online multiplayer.

Melee combat rarely forms the basis of any competitive multiplayer games, with the talented Pandemic’s ill-advised Lord of the Rings: Conquest from 2009 acting as a telling demonstration as to why that is. Doing battle with steel blades and other such weaponry can often feel clunky in an online environment, even when a successful franchise like God of War took a stab at it with 2013’s Ascension. It’s by looking to fighting games that Ubisoft Montreal has come up trumps with For Honor’s combat system, which boasts a level of depth and nuance rarely seen elsewhere. To put it plainly, there’s no greater compliment to pay to For Honor that it’s clear right from the off that it offers dedicated players the potential to get really good at it.

There’s an incredible tension to the dueling that makes every victory feel worthy of a fist pump. Aggression can be an effective approach, especially against more inexperienced players or on easier difficulties against the AI, but the real value of For Honor’s combat is found in learning to play defence well. The characters you play as are known as heroes, and there are 12 in total divided equally between three factions: Knights, Samurai, and Vikings. They operate with different weapons, and are balanced in a way that ensures any playstyle is accommodated, but the basic combat mechanics remain the same. You focus on an opponent by holding L2/LT and control your combat stance using the right analogue stick. Your opponent’s stance is displayed via an icon on their person, allowing you to get into position to block or counter their attacks. If you want to strike, you set the direction using the right stick and hit R2/RT for a heavy attack or R1/RB for a light one. Heavy attacks are slower and therefore riskier as it leaves you open, but landing such a blow can do huge damage. You can chain combos with light and heavy attacks, further adding to the combat’s depth, and it all feels extremely weighty and deliberate in a similar way to Dark Souls.

Blocking attacks and waiting for an opening is key, and when you do find that opportunity to deal some damage, a competent fighter can go in really hard and really fast, barely allowing their opponent to steady themselves. You can also break a defensive stance by barging into an enemy, and can follow it up by throwing them in any direction. Doing so while fighting over a rickety bridge is as satisfying as you can imagine, ditto while near a conveniently placed wall of spikes. With so many different considerations when it comes to battle, For Honor actually ends up sharing some traits with traditional fighting games, where expert players can make it a very difficult few opening hours for anyone coming into the multiplayer for the first time. Just when you think you might have mastered the tells and timings required to block effectively, you’ll realise that high level play is dependent on you also being able to dodge and counter. Some of the lighter-footed heroes are more suited to diving out of the way of attacks, which can prove especially useful if you’re ganged up on by multiple foes. Be careful, though, because attacking and dodging both drain your stamina bar, which can leave you completely exposed.

If you do come up against such overwhelming odds, For Honor can be an extremely unforgiving experience. Success in all but one of the multiplayer modes relies on a strong team dynamic, with the outlier being a 1 vs 1 Duel. Dominion is a 4 vs 4 bid to control three points on the map, with teams scoring points based on how many times they capture them and how long for, and losing points each time the opposition takes a point from them. Deathmatch is also a 4 vs 4 mode and plays as you would expect, but there are two variants. Elimination spawns one player on each side directly facing off against another, meaning there are four duels going on at once. Winning your fight and then rushing off to another part of the map to help a buddy is the source of some great moments, turning up towards the end like Aragorn at Pelennor Fields to turn the tide.  The player count in both Dominion and Deathmatch is complemented by dozens and dozens of AI fodder soldiers, much like in Titanfall. They add a good amount of spectacle and scale to proceedings, and the fact that they go down in one hit means you can feel pretty badass as you chop your way through them, counting as you go like Legolas at Helm’s Deep. Brawl is the other mode and it’s a 2 vs 2 affair, and it’s decided by winning three out of five rounds – the same as Duel. All of the modes can also be played against wholly AI teams.

Tying all of these modes together is an interesting metagame in which the three factions compete for territory on an overworld map. You pick which faction you want to fight for when you first boot up the game (this doesn’t prevent you from playing as heroes from other factions), and each time you finish a match you earn war assets that can be used to contribute to either attacking a slice of land controlled by another faction, or to defending some that yours already holds. Ubisoft has promised that this will be a constantly evolving feature that will reset after a set period of time to determine which faction comes out on top at the end of an in-game season. There will be rewards for players who are signed up to the winning faction, so it’s definitely worth investing in.

As you’d expect there’s plenty of leveling to be done and equipment to unlock, which is both cosmetic and provides boosts to your stats. There are also feats to earn and equip, which are basically For Honor’s take on Call of Duty’s perks. You can equip four at a time and they’re assigned to the d-pad, allowing you to do things like order a barrage of arrows, boost the strength and stamina of nearby allies, or heal yourself. It can all be earned through gameplay, but as is the way these days you can also buy your way to the stuff you want instead. Buying in-game currency with real cash (best value!) is never a great look for a full-price game, but what really rubs the wrong way in For Honor’s case is that future heroes and maps are locked away behind the £32.99 season pass — that’s 3/4 of the price of the full game. It almost seems unfair to compare other online multiplayer games to Blizzard’s fabulous Overwatch at this point, but between that and Titanfall 2, gamers are becoming used to not having to pay up for content that can easily fragment the user base in a way that’s not good for the game or the players.

The only other disappointment when it comes to For Honor’s multiplayer is the netcode, which has been shaky at best. There are no dedicated servers and disconnections from matches haven’t been as rare as you might like during the game’s first week on sale. If you do get disconnected, you lose any stats or progress you might have otherwise earned. Getting into matches within certain modes — notably Duel and Brawl — can also take a little longer than it should. On a slightly stranger note, some players have also reported random elements of the multiplayer menu displaying in a foreign language, mainly the daily challenges. The fact that these update every 24 hours may just be a sign that whoever’s responsible at Ubisoft is taking their Rosetta Stone studies a little too seriously.

Thankfully, if the netcode is letting things down, For Honor also offers a pretty decent campaign, which is playable alone or in co-op. The story is a nonsensical tale of the warlord Apollyon who aims to manipulate the three factions to fashion a world of endless conflict. As a way of justifying level after level of relentless battling, it’s almost admirably straightforward, but it offers nothing beyond that. Although while it’s not worth paying a whole lot of attention to the storytelling, even with the well produced cutscenes and decent voice acting, it’s certainly worth playing through as a training ground for online competition. It does a good job of teaching you the mechanics and also gives ample opportunity to test drive every faction and each of their four heroes, plus all the unlockable feats.

XP is gained separately in the campaign but unlockables from leveling up there are persistent with your collection of goodies available to equip on your online heroes, and there are plenty of collectibles to find, but these aren’t good enough reasons to replay any of the levels despite the game’s best attempts to convince you otherwise. That said, if you’re really struggling to compete online, going through some of the harder missions a second or third time might not be the worst way to get some additional practice in. Being good – or at least having some success – at For Honor is incredibly satisfying, so it would be a shame not to persevere and give yourself every chance of competing well online. You haven’t experienced true joy until a tense online battle concludes with you nailing a counter and slicing your foe’s head off with a katana in one fell swoop. These brutal finishers are no doubt the stand out elements of what is an excellent visual showcase on both consoles, especially if you’re playing on a PlayStation 4 Pro.

It’s also worth mentioning the fantastic sound design. The roars and cries of battle and the clattering of steel really adds to the intensity of the combat — close your eyes and you might mistake it for Game of Thrones’ Battle of the Bastards. The music isn’t dissimilar, either.

For Honor’s commitment to its mechanics makes for a deep and rewarding competitive multiplayer experience like no other. It’s a game that demands patience and a willingness to learn, but is more than happy to reward you for it. Brutal, meaty, demanding, and undoubtedly the best it’s felt to swing cold hard steel in an multiplayer setting, For Honor is the surprise hit of the year so far.