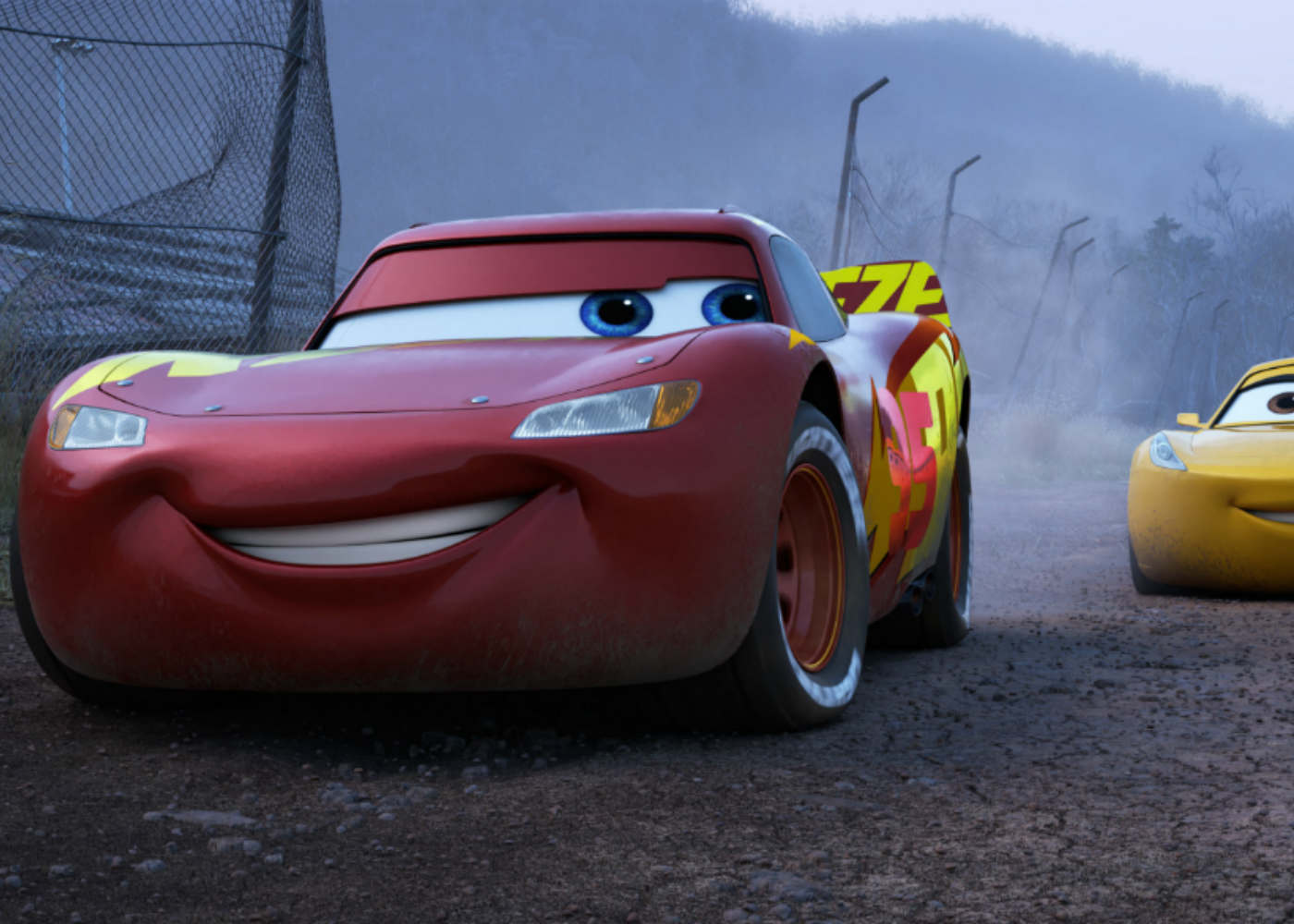 The Cars franchise is the pariah of the PIXAR oeuvre. Dismissed as a toy store advertisement by some, and just plain unlovable by others, the fact remains that the first was narratively unadventurous, with characters that were equally slight, or just downright rootin-tootin annoying (we’re looking at you Mater), and the second was arguably the studios creative nadir. Cars 2 being a convoluted spy-caper that shoved the aforementioned tow-truck front-and-centre.

Returning for a third time under the executive producer stewardship of John Lasseter, for whom this franchise is a real passion project, Cars 3 sets out to redress the race-line for the series, injecting it with the kind of peerless charm that has made their films so timeless. Does it work? Well, it swerves the wreckage of its predecessor in favour of a nostalgic Rocky Balboa comeback narrative, which is safe rather than spectacular, but you still can’t help feeling there should be more under the bodywork.

Lightning McQueen (Owen Wilson) is still adored by legions of fans lining the circular tracks upon which he shoots around in Championship winning style. That is until an unheralded rookie, Jackson Storm (Armie Hammer), bursts from the pack with his suped-up paint job and subtle put-downs, in the process triggering a racing grid transition from the old to the new that puts McQueen’s future in doubt.

After a horrific crash leaves him wallowing in an existential crisis, it takes the words of his old mentor, Doc Hudson (the late Paul Newman), and the encouragement of his girlfriend [?] Sally (Bonnie Hunt) to convince him to give it one final spin before passing the chequered flag for good.

When the trailer for Cars 3 debuted earlier in the year, it got people excited for a movie that nobody, bar the target demographic of kids and PIXAR bean counters, really wanted. Sadly, it isn’t that film; Cars 3 isn’t a Toy Story 3 standard emotional wrench. Instead we get quite a genteel, old-fashioned tale, with a nice little gender politics twist, that’ll keep the fans happy, whilst nudging the naysayers towards a slightly more empathic response.

Whether intentional or not, Cars 3 feels a bit of a re-tread of the first film, with McQueen being coaxed from a state of disillusionment by the surrounding vehicles, towards a moment of moral epiphany. PIXAR have never really adhered to the ‘if-it-aint-broke’ method of filmmaking, but by jettisoning the globe-trotting nonsense of Cars 2, and simplifying things, it ensures that you feel for these metallic oddities for the first time.

Lightning’s arc is similar to that of Rocky Balboa in Creed; facing your mortality head-on and making a choice, and it’s the direction in which that journey goes that is the most welcome surprise here.

Wilson continues to play the red racer with the kind of earnest enthusiasm that benefits a narrative about going against such an overtly positive outlook, but let’s face it, he’s not the most interesting of PIXAR’s creations, with comedy hardly his strongpoint. For that the franchise has always relied on the divisive Mater (Larry the Cable Guy), who’s thankfully on the periphery of proceedings here. In fact, memorable characters is what the series lacks, and despite the introduction of his new sponsor, Sterling (Nathan Fillion), Lightning’s trainer, Cruz Ramirez (Cristelo Alonzo), and wise old Doc Hudson replacement, Smokey (Chris Cooper), none of them leave much of an imprint on the film.

There is fun to be had with the Mad Max style carnage of a banger racing event, where our heroes are pitted against an angry school bus and plenty of pyrotechnics, but aside from the times in which the camera pulls back to reveal the detail of the Radiator Springs backdrop, as impressive as it is, this is your standard monochrome sheened Cars aesthetic.

PIXAR have put a bit more air in the tyres of their much maligned franchise, making a journey with Cars 3 a lot more rewarding than on previous occasions, but much like the conflict at the heart of this entry, maybe it’s time to go out on a high?