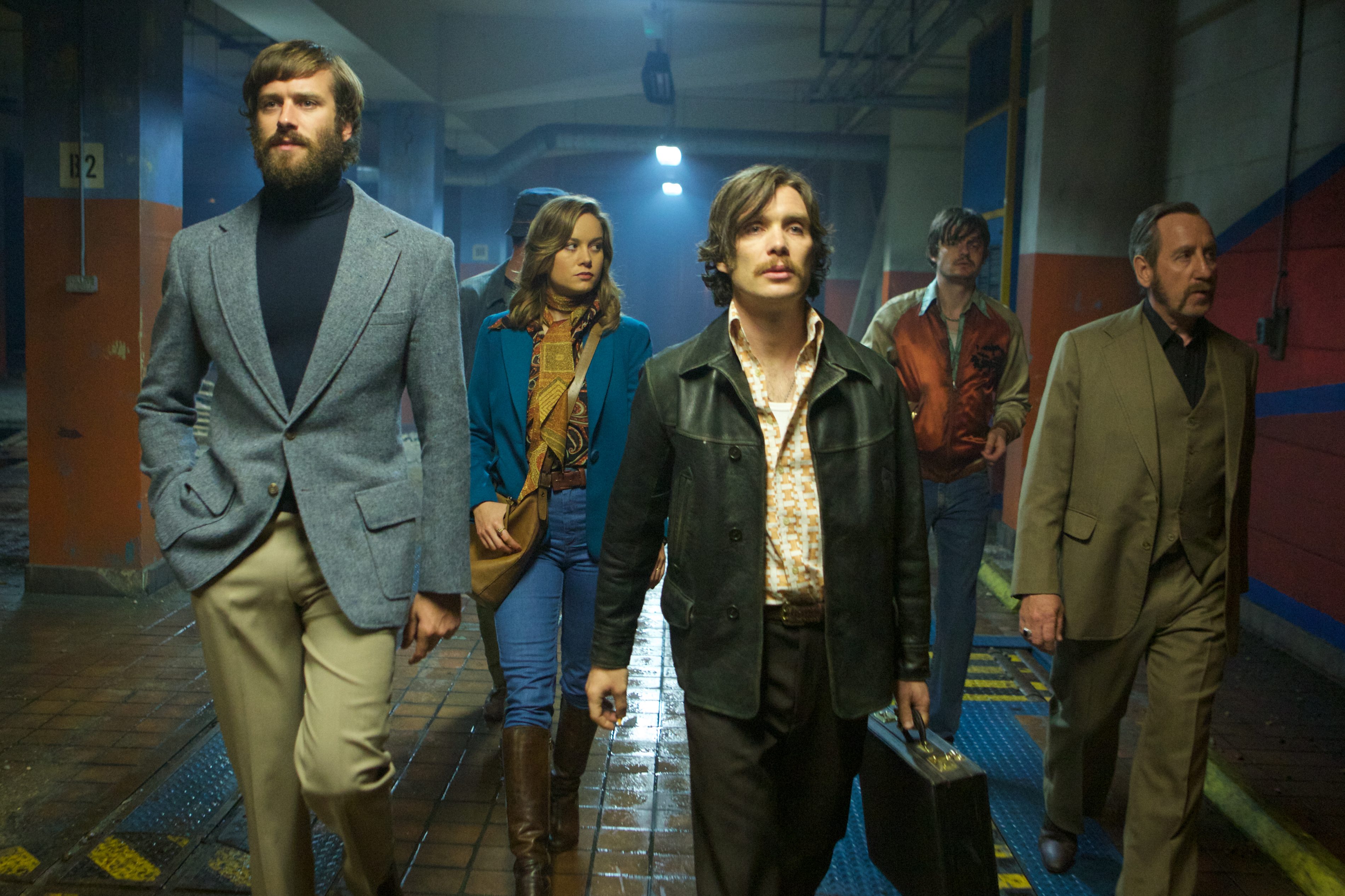 There comes a moment in Ben Sightseers Wheatley’s gloriously Looney Toons action comedy when a character utters “fuck the small talk, let’s buy some guns”. Essentially that’s your film right there. Lots of achingly cool dialogue thrown about by a quality cast, before it descends into an O.K. Corral between the most incompetent shooters outside of a Star Wars stormtrooper unit.

With an arms sale organised at an abandoned warehouse, a disparate group of crooks begin to emerge from the shadows to gather around a crate of M-16’s. Selling them is Vernon (Sharlto Copley), a man described as being “misdiagnosed as a child genius, but never got over it”, which might go some way to explaining why M-16’s are not the weapons that Irish dissidents, Chris (Cillian Murphy) and Frank (Wheatley regular Michael Smiley) had ordered. Its news that immediately gets everyone edgy, including the overseer of events, suave American, Ord (Armie Hammer), and the already twitchy junkie, Stevo (Sam Riley).

Despite the best intentions of the level headed Justine (Brie Larson), and Vernon’s ‘assistant’, Martin (Babou Ceesay), it’s inevitable that with this cocktail of personalities, one or two of them are going to be Molotov’s, triggering a shootout punctuated by cracking one-liners, “I forgot whose side I’m on”, and the sound of bullets missing their target.

Don’t go into Free Fire expecting depth, Wheatley left that in A Field in England and High Rise, but in its place is a director enjoying himself with this roll call of unique characters, letting loose with a Tarantino aesthetic, right down to the 70’s font, and providing you with a lean shot-to-the-arm of riotous fun.

The candidates for motion picture MVP are strong, with Sam Riley’s foil carrying van driver a particularly funny reprobate. His war of words with Jack Reynor’s schlubby stooge, who enters proceedings to the tune of John Denver’s Annie’s Song, which becomes a recurring motif throughout the film, are consistently hilarious. In fact, everyone is just bickering with one another. Armie Hammer is terrific with his couldn’t-care-less attitude and disdain for Michael Smiley, his beard oil gag is one of many that’ll bring the warehouse down.

However, Sharlto Copley wins hands down with his best performance since District 9. His attempts to be charming to Brie Larson (expectedly excellent, if a little underused) result in lines such as “the bird has a point”, and the first time he is shot through the shoulder of his blue Savile Row suit is hilarious. Everyone gets their fair share of punch-lines, but nobody delivers them quite like the South African.

Wheatley adds another string to his bow, seemingly able to dip into any genre at will, and Free Fire’s action mechanics result his most accessible film to date. The strength is found in the set-up, moving the pieces into place, making sure that they’re all given their own identity, and then playfully waiting for everything to go boom. The audience is aware of the genre conventions, so Wheatley has fun teasing them, even having his own “boo” moment when a character gets a splinter. When it does eventually kick-off we get some Sergio Leone music and a slow-motion sequence, a clear nod to the films it’s being reverential to.

Any movie which features the line “Steve, you chocolate tea pot!” is automatically a recommendation, and although this is essentially a wafer thin genre flick, it’s also full to the brim with charisma and style.