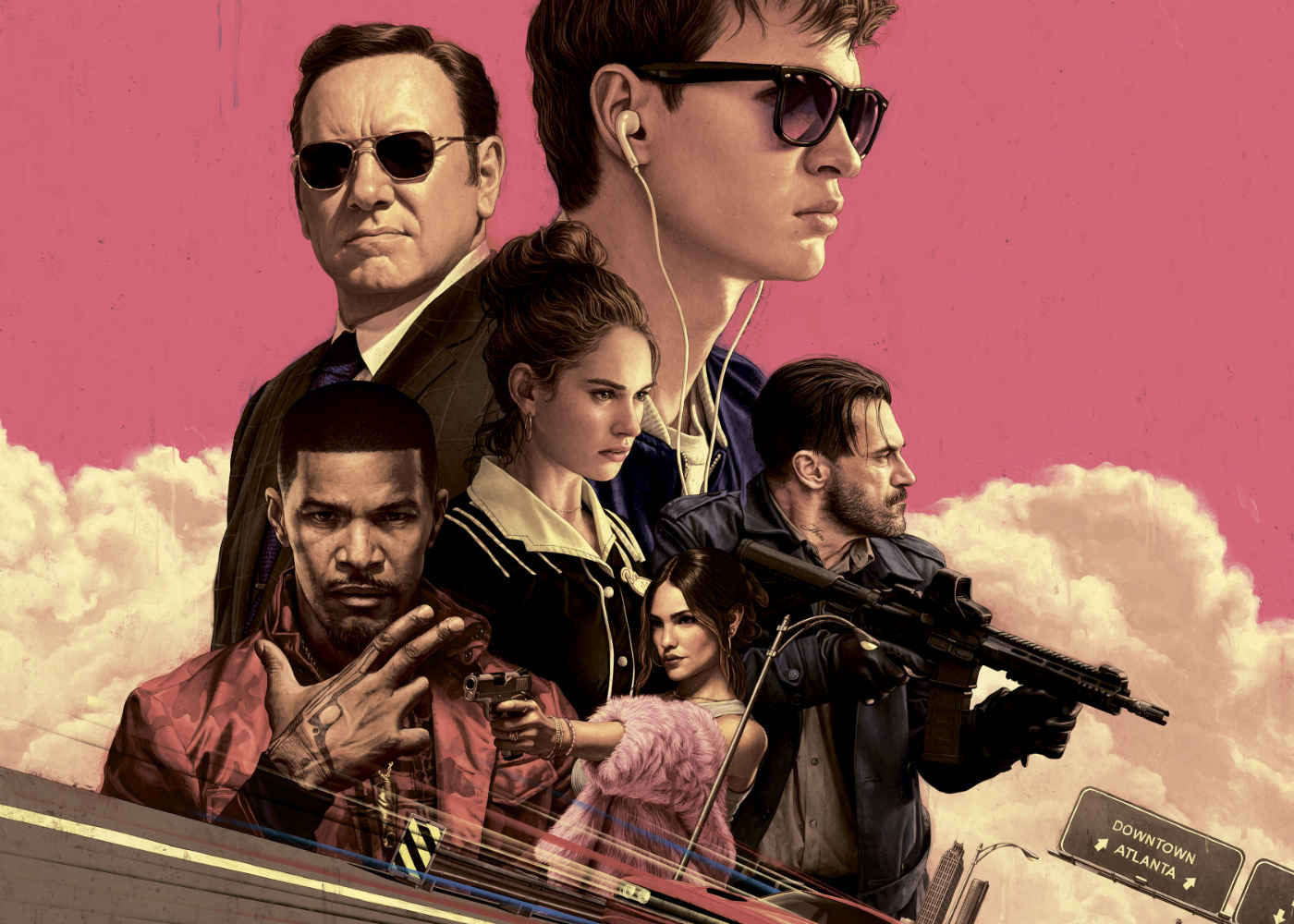 Baby Driver is a semesters worth of distinction level film studies in a single movie. Nobody does shot composition quite like Edgar Wright, with this being no exception, as not a single frame is wasted in a gloriously giddy adrenalin rush to the senses.

Emerging from the one-two of Scott Pilgrim vs the World’s commercial failure, and the Ant-Man debacle over at Marvel, The Cornetto Trilogy’s ‘Mr Whippy’ strides back into public consciousness with a narrative as well-worn as the tyre tread of the getaway car driven by the titular Baby (Ansel Elgort – The Fault in Our Stars). A one-final-job heist flick, that’s quite unlike any you’ve ridden shotgun with before, one imbued with so much creativity, that when it does veer onto familiar ground towards the end, it only emphasises how extraordinary the rhythm ride has been to that point.

Our driver is Baby, an orphaned, insular chap, who walks to his own beat, one orchestrated by the buds in his ears, belting out one of hundreds of playlists that help to subdue the tinnitus he has suffered since a childhood tragedy, but more appealingly to Kevin Spacey’s Doc, the head of a bank busting crime syndicate, it makes him the best getaway driver in the business. He’s so good that he’s the only constant member of crew that rotates it’s criminals between Griff (Jon Bernthal), Buddy (Jon Hamm), Darling (Eliza Gonzalez), and Bats (Jamie Foxx).

Driven by a desire to escape a vocation which causes harm to innocent people, Baby is given motivation to put his foot to the floor of this plan when he meets sweet-as-pie waitress, Donna (Lily James), and plots his own getaway, despite the potential ramifications for those he loves.

So what makes this any different to the 70’s influences (The Driver and The Warriors) that it wears on its sleevs as go faster stripes? Well, aside from eschewing the usual US concrete jungles used as a canvas of crime for the refreshing aesthetic of Atlanta, Baby Driver is crammed to the corners with filmmaking ingenuity. Oh, and its kind-of a musical.

Take the opening sequence for example; a one-take tracking shot which follows Elgort as he picks up coffee, swings on lampposts, shadow-mimics graffiti, and awkwardly mimes to lyrics in the same way that we all do once submerged in our own in-ear soundtrack to our lives. All of the musical cues and ticks are so perfectly aligned to the on-screen action that the whole thing feels organic, part of one fluid machine. It’s the evolution of the filmmaking process used in Spaced, when Michael Smiley’s Tyres suddenly busts out a series of dance moves to the innocuous sounds of everyday life, but now it’s writ-large on the big screen with landscape shaking invigoration. Which is another way of saying that this is different to anything clogging up the multiplexes this summer.

The soundtrack is immense, sure to influence your life in the same way that it does Baby, with The Commodores ‘Easy [Like Sunday Morning]’ a recurring motif that accompanies joy, revelation, and sadness. There’s also lesser known Queen track ‘Brighton Rock’, and the brilliance of Young MC’s ‘Know How’. But these are just three from a litany of carefully selected choices, from a director who wants his film to be informed by the same music that pieces together the fabric of Baby’s emotional arc. It’s an audio visual jigsaw that pieces together almost perfectly.

It’s only when the brilliance of scenes such as a laundry mat headphone waltz between James and Elgort, or the wonderfully played exchanges with his deaf step-father, give way to more straightforward action mechanics that Baby Driver stalls. Even then though, the gun-fire is in sync with the musical notes, and lines of dialogue are layered upon the rhythm of the action, that by then you’re so attuned to the DNA of Wright’s film that you almost don’t notice them. Like all of the best albums, re-watches/listens will be a must.

The cast are uniformly great; Elgort was in line to play the young Han Solo, but here he has the chance to shoot first with a role that sets the bar for cool, as well as ensuring Baby has a vulnerable awkwardness, making his fate worth rooting for. Lily James compliments him perfectly in the hip-to-be-cool stakes, with whip sharp quips and Tarantino style wordplay. Any worries that she’s simply on-board to be rescued by Baby go out the window by the time the satisfying coda plays out. Jamie Foxx plays the intimidation card to perfection, Kevin Spacey brings his Swimming with Sharks persona to the heist table, revelling in the chance to chew on Wright’s dialogue, and Jon Hamm gets a an unpredictable arc, which doesn’t entirely work, but as always he’s very watchable.

It won’t be for everyone, but revving up on the front few grids in the race for film of the year, Baby Driver has an irresistibly unique energy that’ll have you finger tapping your way through the smartest piece of filmmaking this year.