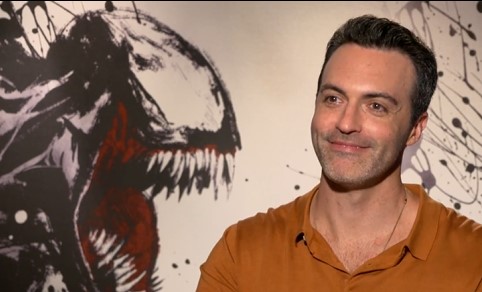 Venom is on its way to its nationwide debut. Arguably, fans of the Marvel character can no longer contain their excitement over the film’s premiere. Lucky for them, the adaptation has yet to hit the big screen across the country but there is already talk of a sequel.

Reid Scott, known for his role on My Boys and Veep, was recently interviewed by ScreenRant at the wake of the initial worldwide premiere of venom. Scott plays Dr. Dan – the third player in the love triangle between Venom and Anne. During the conversation, the actor revealed the process in which they decided to play the love triangle out.

Scott explains that him and the director, Ruben Fleischer, agreed that the whole concept of the old boyfriend hating the new boyfriend is already a tired trope. That’s why they decided to craft Dr. Dan into someone who is more level-headed and lovable:

“The new guy feels threatened by the old guy and then you’re just wondering how they’re going to duke it out and fight over the girl who’s going to throw her hands up and be frustrated by how meat-heady these two idiots are and stuff. So, we didn’t want to do anything like that. We had a lot of fun playing with that. And where we sort of landed is… [the director] Ruben Fleischer and I talked about the character in the early days of shooting. I was like, ‘What if he just loved Eddie? What if he just thought Eddie was just cool and almost couldn’t help himself around Eddie a little bit?” explained the actor.

This is arguably Scott’s biggest big screen role. And already, the actor has ideas on how the sequel should play out.

Scott clarifies that he doesn’t have any idea if a sequel would be greenlighted. However, he says that it would be interesting to see his character with the symbiote:

“Just like hacking away patients. Giant blade hands. He would be a better doctor and he could reach inside and like fix somebody whatever they got there going on. And pull it back out. Yeah, that’d be cool.”

This is not the first time Scott spoke about the possibility of a sequel. Before the initial premiere, the actor was interviewed by Comicbook.com. During the sit-down, Scott explained that while the possibility of a sequel is still tentative the cast and crew have already discussed the idea. And because they had so much fun on set, he wouldn’t be opposed to returning to the franchise:

“We definitely talked about sequels and all that. It can get tricky. But look, these are champagne problems. If this becomes a giant hit and they want to make 10 more, I look forward to having that problem. We had a blast shooting the thing. I grew up a fan of Venom. Being part of that world is really cool. And yeah, I’m very curious to see how the movie is received. I think that people are going to really dig it. And yeah, I’m excited to see this thing explode.”

Venom is scheduled to premiere on October 5, 2018.