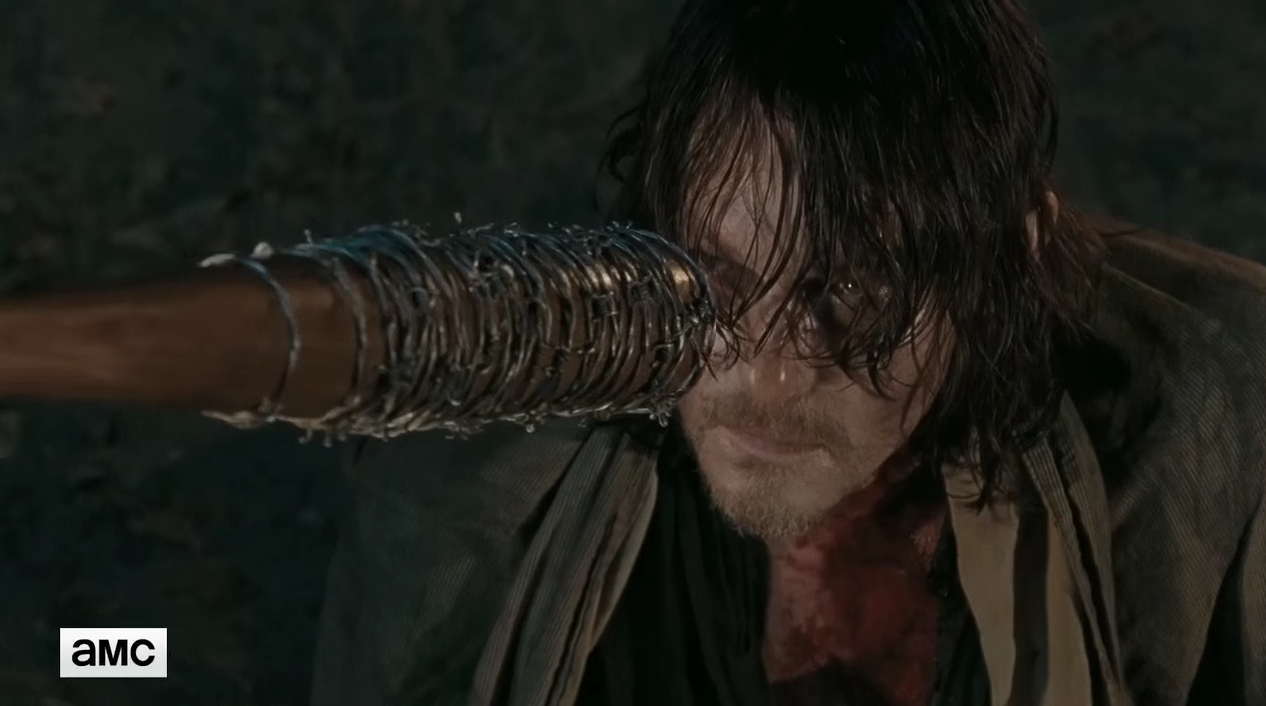 15 minutes. We waited 15 minutes before finally seeing who Negan killed at the end of Season 6. The Walking Dead’s producers and cast have spent the last six months ensuring fans the wait would be worth it. An emotional ride is what was promised, and that is exactly what we received. 15 minutes into the Season 7 premiere and Abraham was revealed as Lucille’s victim. Social media exploded in sighs of relief that the original team was still safe. However, it was short lived. Lucille’s next victim was everyone’s favorite pizza boy, Glenn. But it wasn’t supposed to go down like that. In fact, Negan’s antics, his more fatal ones, seemed to be over. And then Daryl happened.

Unwilling to stand by as one of his own was brutally slaughtered, the crossbow totin’ biker took a swing. Daryl’s actions were unacceptable and to prove a point, Negan felt a punishment was in order. General consensus agrees Glenn’s death is on Daryl. According to Norman Reedus, the character is aware and “it weighs heavily on him.”

“I don’t know that anybody in that group blames him for anything, but he blames himself more than anything. It really brings him down to a certain level where whatever shitty thing is thrown at him, he is just going to take it,” Reedus told Comicbook.com.

As the first episode of Season 7 came to a close, Daryl was taken away in a van. He’s sort of a prisoner of war now, and the events leading to his imprisonment will greatly affect him.

“He goes very, very dark. He does certain things that he can’t go back from. He goes to a very, very dark, dark place. It’s a combination of hatred. It’s a combination of self-loathing. It’s different from when he first started on the show. He has a big chip on his shoulder. He thought people wouldn’t like him. He didn’t give a shit. He hates you, too. It turns now into he kind of hates himself. He hates the world that we’re in, and he doesn’t lose the fight in him, but he definitely no longer sees anything good in the world, that’s for sure.”

For now the squad is broken, mentally, physically, and emotionally. Negan is inarguably the deadliest foe Rick’s crew has come across. It’ll be interesting, and heartbreaking, to see how they manage going forward.

Also, poor Maggie. First her father, then her sister, now Glenn. Her arc this season will also be one to keep a close eye on. In the comments below, tell us your thoughts and theories on what you think is on the horizon.