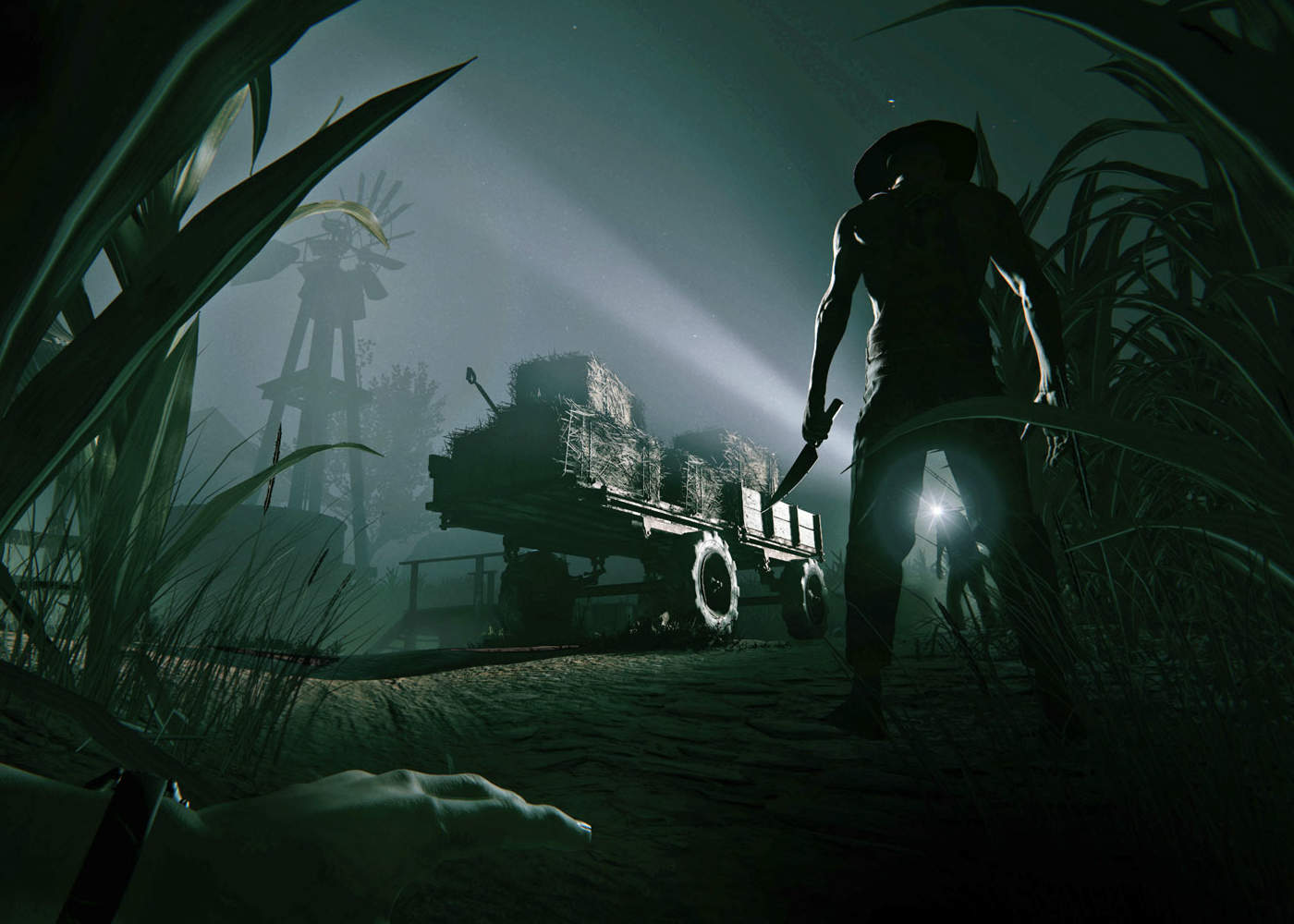 I remember reading a review of the first Outlast where the reviewer said something to the effect that they needed to take the occasional break from the game for a warm bath and a room temperature glass of whisky. I thought they were being melodramatic until I played Outlast and thought that was an incredibly rational description of my experience. The game was the first horror title that ever made me hold my breath because, even though I knew the antagonists in it couldn’t hear me, I couldn’t chance any real world noise alerting enemies to the fact my character was hiding in an in-game locker. Crazy? Maybe, but it also impressed me. It isn’t easy to do that to someone who has been a fan of the survival horror genre since the first Resident Evil. Flash forward to me sprinting frantically through a cornfield with no idea where I am going but unwilling to stop until I either get out or die and you’ll begin to understand my experience with Outlast 2 and why I still need some whisky and a soothing dip in a warm tub even now.

You play as cameraman Blake Langermann who is assisting his wife Lynn as they investigate the mysterious death of a young woman discovered barefoot, pregnant and allegedly strangled in Arizona. Lynn decides her death must be related to toxic runoff from a factory hidden somewhere in the Sonoran Desert and the two of you set out on a helicopter to see if you can locate the factory. Suddenly, a bright flash fills the sky as you are flying over and somehow disables the helicopter, causing it to crash. Blake awakens from the wreckage and sets out to locate his wife. Unfortunately, he has landed in the heart of a territory overrun by crazed cultists (and crazed former cultists) who want things for you and Lynn that are sometimes more horrifying than death.

Get It on Tape (documenting your mental breakdown)

Like the original Outlast and the related DLC Outlast: Whistleblower, Blake’s greatest asset is his digital camera. The now iconic use of the camera’s night vision is back along with the battery hoarding (and it appears cultists with few modern conveniences still need AA batteries, thankfully). However, Red Barrels added in a new feature that allows the player to listen closely to sounds like footsteps and voices using the camera’s speakers. Unfortunately, though, while I did use the capability a couple of times to great effect (once while hiding in a closet and attempting to avoid two enemies patrolling separate routes that converged on the room I was hiding in), it felt like it was rarely needed. The game offers quite a few places to hide throughout, but I found either moving quietly through the dark or just running for it were ultimately more effective (that is, once you figured out where to go, but more on that in a second).

Perhaps the most interesting advancement in Outlast 2 is that the game prompts the player in certain places to record whatever Blake is seeing in front of him. Unlike in the first game where you could choose to record whatever you wanted, Red Barrels has chosen to make the recording mechanic more integral to the gameplay as well as the story. During an interview with Engadget back in February, game designer and co-founder of Red Barrels Philippe Morin admitted Outlast 2 was about documenting Blake’s descent into insanity and taking the player along for the ride. “Internally what we’ve been saying is, the first Outlast was meant to take away your physical integrity,” Morin explained, “and the second Outlast will take away your mental integrity.” This becomes obvious to the player as whatever is causing those bright flashes in the town starts to drag Blake in and out of reality into warped versions of his past as a kid in Catholic school dealing with the death of a close friend. However, the player can go back and watch Blake’s recordings, and as the game progresses Blake’s narration of these pieces reveals that all is not well in his mind.

While the first Outlast certainly touched on the horrific results of breaking a human psyche, the player was more immediately concerned with their own safety. In a way, though, both Outlast 2 and the first Outlast ask similar questions just in different directions. The first was obviously more about science driven to an extreme that neglects the inherent dignity of the human animal, and the second is questioning the effects of religion when taken to the extreme of blind devotion. In the first Outlast, the Walrider was a horrific result of the human mind rent from everything that made a human being who they are. Outlast 2 sort of takes it the other way and looks at the human psyche overwhelmed with all the worst parts of exactly who we are as humans, including feelings of guilt, shame, anger, fear, uncontrolled lust, abuse, and thoughtless allegiance. So, in the end, both are exploring what makes us human and how we hold together the many incongruous aspects of our nature, along with the greater questions about the nature of reality and how we function as a species.

Prepare Thyself (to get lost and die, a lot).

The world of Outlast 2 is meant to feel much more open than the walls of Mount Massive Asylum, and in some ways this makes the game’s enveloping sense of dread even more remarkable. However, it can also be one of the major sources of frustration. There are certainly times when you get the feeling you are decently safe (for now), but the game never lets you feel truly comfortable. This is partially due to the fact enemies can pop up quite suddenly, and in the more open areas this is coupled with the fact you often do not know were to go. Yes, this is a very efficient way to drive the player into a mad panic, forcing them to rely on primal reflexes and adrenaline rather than careful planning. I imagine this was likely the point. The fact there is really only one route, but you can easily run yourself down dead-ends and become trapped in buildings that do not have an alternative exit is likely intended to add to the player’s sense of being free but also surrounded at the same time, and certainly amps up the anxiety. However, it can also result in increasingly frustrating loops of trial and error, and when your stress levels are already piqued due to a fully engaging survival instinct, it can wear on you far more quickly than it might otherwise.

The game also begins to drag a bit about a third of the way through. There becomes a point where it feels like the game is being stretched for length, and perhaps for more effect, but it slows the overall story. The shorter length and more confined space of the first Outlast and Outlast: Whistleblower had the positive effect of directing the plot into a finely consolidated tale just long enough to be interesting, but short enough to stay on point. There are times in Outlast 2 when I wondered why I was sent to this area when it might have been handled in a note, or perhaps without me having to go through that hour or so of travel or exploration. Even the notes you find too often add very little. Only a few actually hold vital information or carry the plot forward. I realize there is something to be said for atmosphere, and that part of Outlast is the experience, but I do hope Red Barrels can keep the improvements they’ve made in Outlast 2 (including some of the open world feel) but without sacrificing the excellent storytelling afforded through the more refined structure of the original.

Outlast (the most fun you’ll ever have losing your shit)

As I said at the beginning, there are few games that stick with a gamer for a long time, but fewer that pull the player into the game in such a way that it becomes emotionally and even somewhat physically difficult to keep going. I remember playing Heavy Rain and having to use my controller to make a chopping motion in order to cut off one of Ethan’s (the protagonist’s) fingers as part of a sick task to appease the crazed maniac who had kidnapped his child. I remember it being emotionally difficult and feeling some faint phantom pain in my pinky that lasted a whole day. Outlast 2 takes that sense of empathy and visceral reaction and uses it to mess with the player throughout. In the end, it feels like you have been through quite an ordeal, and you realize the name Outlast was actually quite apt of the developer.

Along with questions about the human psyche and what we are as complex creatures that must somehow work as a whole being, the game also touches on subjects we can all relate to such as regret and dealing with pain from our pasts. It also deals with a topic that is, unfortunately, still too prevalent in our society and not only in the context within which Red Barrels chooses to address it. For some people, this very real-world horror will make the game especially difficult, and certainly makes the ending all the more haunting.

Though Red Barrels has claimed in the past that Outlast 2 and its predecessors are not really related, careful observers and explorers will find there is more of a connection than they first thought, The game’s ending will also leave you scratching your head for days, but sometimes that serves to make the experience all the more interesting. In this case, I have had almost as much fun talking about it as I have playing it, and there may be more secrets forthcoming as gamers delve deeper into the mysteries of the desert and Blake Langermann’s  psyche. For me, I hope Red Barrel’s releases a DLC similar to Whistleblower that will shed some new insight onto the subject. Until then, I’ll just be here sipping on some Jack Daniel’s and reminding myself everything is fine. Safe and fine. And staying away from corn fields.

Red Barrels continues to push the survival horror genre forward, reaching new heights of terror that keeps the player on edge. A few new additions to Outlast’s now classic mechanics are a welcome improvement, though some feel underutilized. The new more open feel can bog down the pace of the story, but does also add to the overall feeling of anxiety, especially when running from enemies without a clear direction. Overall, Outlast 2 can be a challenge, but its exploration of madness, blind devotion, the complexity of the human creature, and its ability to keep your fight-or-flight reflexes on constant readiness makes this a journey you won’t soon forget . . . or recover from.