News about Marvel’s Inhumans television series has been worrying at best. Original plans for a feature-length film were announced in 2014, but later scrapped. Then in April 2016, the studio revealed the Royal Family of Attilan would have its own television show. The series premieres exclusively in IMAX theatres on September 1, followed by a television premiere on ABC on September 29. According to Yahoo’s Robert Clarke-Chan, the “company is confident that it won’t just look good big — it’ll look good on IMAX, the biggest screen of all.”

At its heart, Inhumans is a family drama. A new poster features Black Bolt, King of Attilan (Anson Mount), standing with his wife Medusa (Serinda Swan), whose wild red hair flares out from the two bolt-like antennae surrounding them. In the center is Maximus (Iwan Rheon), Black Bolt’s brother, who constantly challenges Black Bolt for control of the kingdom (and sometimes Medusa’s affections). Previous production photos also revealed Eme Ikwuakor as Gorgon, Ken Leung as Karnak, and Isabelle Cornish as Crystal. 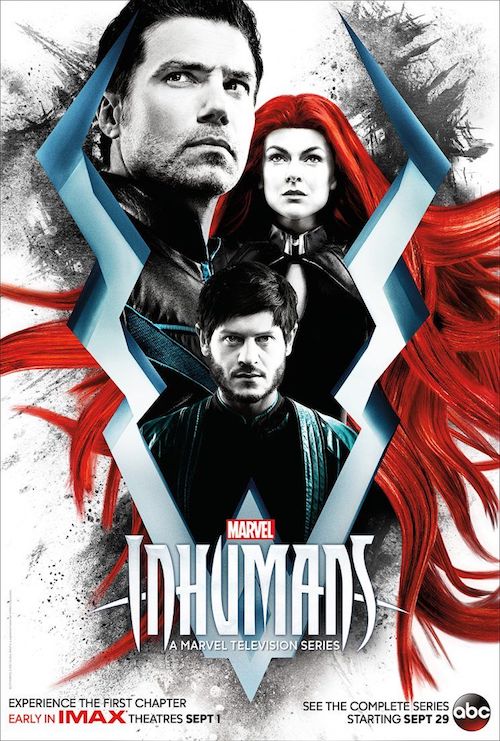 The theatre release is promising for fans of Attilan’s royal family. A financing partnership with IMAX allowed Executive Producer Scott Buck (Iron Fist) “a lot more freedom and encouraged us to think bigger than we would if it was just a normal network show,” he told Entertainment Weekly. This is ideal news, given the special powers of the Inhumans will likely demand heavy usage of special effects. Medusa ensnares her victims with her fiery, flowing locks, while Gorgon generates seismic waves to level his enemies. But it’s still reasonable to have doubts, given the studio’s previous television work with lackluster effects. And while a teaser video is available, fans have yet to see any footage.

The characters pose other, interesting challenges to Buck’s team as well. Black Bolt is a typically silent character, since his primary weapon is his supersonic scream. After Buck ruled out using voiceover, Anson Mount developed a sign language for the character to communicate with. It will be interesting to see how this plays out on-screen, and how receptive audiences will be to these differently-abled characters.