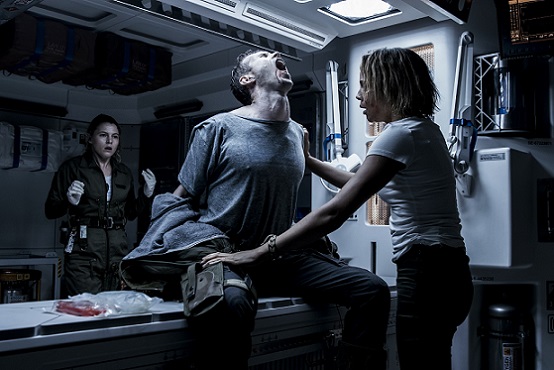 Everything about Ridley Scott’s follow-up to the unfairly maligned Prometheus, indicates that Alien: Covenant is going to be a return to the haunted house horror-in-space of 1979’s seminal Sci-Fi.

The release date was moved forward by months, which indicates confidence from a studio that we weren’t even sure would greenlight a follow-up to Prometheus.

Then there was that terrifying trailer, which for many of us was the best present we unwrapped on Christmas Day. Beautiful, creepy, and hinting at an intensity to replace the perceived pomposity of the first outing. Amidst the fast edits, and silent posturing of Michael Fassbender’s David, we glimpsed a lot of the line-up that would meet a grizzly end in either of the xenomorph’s acid-dribbling dual mouths.

During the ad break of FOX’s US Broadcast of the terrific Legion, they dropped an extended clip that introduces us to the Covenant. A group of couples, selected for a repopulation program in a desolate planet in a far flung corner of the galaxy. What could possible go wrong?

The clip prominently features Danny McBride’s ‘Tennessee’, who appears to be stock McBride shtick, which will either offer up a redemptive arc, or make the audience hope he gets munched on during the early exchanges. Also, now that James Franco’s involvement has been revealed, we discover that he’s the captain of this ship, and he’s feeling under the weather, which is never a good sign when there are facehuggers in the area.

The most intriguing characters remain Katherine Waterston’s Daniels, who doesn’t appear to be part of the coupling, despite the fact she offers up a cheeky wink to Franco’s captain. Coming across as an echo of Ripley, but with modern smarts about her. And then there’s Fassbender’s crew android, who embodies the playfulness of the clip with a great callback to the infamous dinner scene from Alien. His eventual meeting with his model’s predecessor, David, who we last saw as a head stuffed in Noomi Rapace’s bag, is as eagerly anticipated as the slow, skin crawling opening of a Queen’s egg.

It’s fun, light, full of tiny beats that hint at conflict, and hopefully a complete juxtaposition to the dark corners that Covenant will have us peering around when it’s released on May 19th.