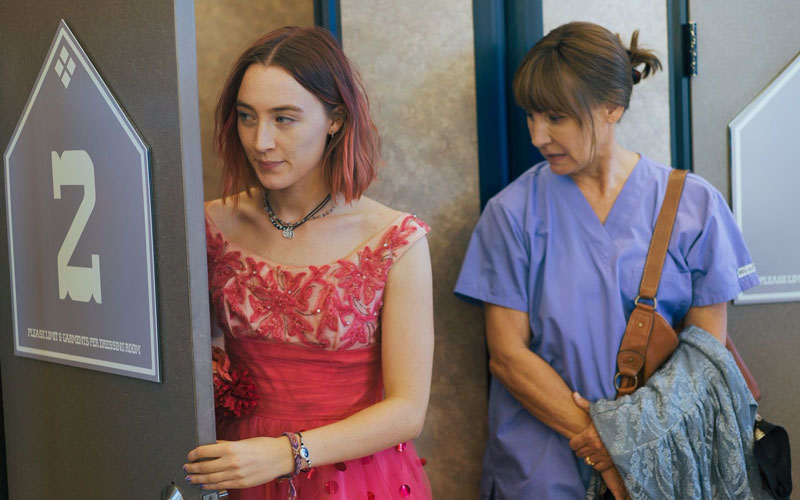 Lady Bird is about a teenage girl who calls herself “Lady Bird” who, like your ordinary teenage girl, always aims for what she wants. The cast of this film includes Saoirse Ronan as Christine aka “Lady Bird” and Laurie Metcalf (Roseanne) as the mom. The movie is about a teenager who is dealing with growing up and who doesn’t appreciate everything she has and instead always aims for the better things in life. But in her pursuit, she discovers that life isn’t what it seems and begins to change her mind, in the end, her love for her family, her love for her friends, and her love for her hometown helps to give her character the growth it needs to make Lady Bird truly feel like a film anyone with a teenager can relate to.

What surprises me was the appearance of Timothee Chalamet in the film he was also in Call Me by Your Name a movie about a somewhat forbidden romance. I did like his portrayal in that movie better, but his performance in Lady Bird proves he’s got chops and we will probably see him in more Oscar-worthy movies going forward.

Overall the film was entertaining, the cast was great, the script is good, but I was quite confused at the beginning of where the story was heading, but in the end, I think it all worked out. Despite Lady Bird being a brat she manages to learn how important her family is, most notably her mother, whom she thought was not so fond of her or her personality or her guts, but in the end, there is a still a more rooted love between them which proves a mother-daughter relationship is not one that can be strained easily and I have to think that’s true because no matter how far my mother is I know she’ll always be there for me no matter what even if we’re mad at each other.

Lady Bird is mixed with drama and emotion. It manages to tackle major issues such as abortion and premarital sex which is prevalent not only in America but also around the world, and the perception of morality is different for each character which makes the film more multi-dimensional than I expected. The script was also superb and we have to applaud Greta Gerwig on the final outcome she really managed to convey the characters so well and Saoirse Ronan was the perfect choice for Christine aka Lady Bird. With the production set in Sacramento with dreamy California in the background, there’s really not a lot to hate here. I’ll give this film an 8.4 out of 10.

Lady Bird manages to tackle major issues such as abortion and premarital sex but offers a clear perception of morality for each character that offers a truly good piece of storytelling of modern day family dynamics.