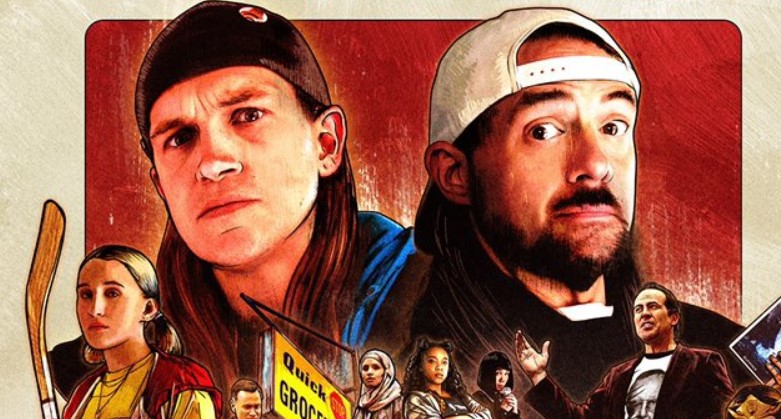 A lot of big films are set to come out in October, and one of them is Kevin Smith’s comeback to films, Jay and Silent Bob Reboot. So far we only have one trailer for the movie, but Smith has shared a new official hand drawn poster for the film.

I’m proud to present the first of our two @jayandsilentbob Reboot theatrical release posters! Created by @wearebond artist @the_hsu, this phenomenal poster homages another recent Hollywood flick (that Reboot costar @harleyquinnsmith was also in) while calling to mind every 70’s and 80’s movie marketing campaign I ever saw while growing up! Tony hand drew everything you see here and made a masterpiece that’ll hang in my home forever! Also, we announced new dates for the #JayAndSilentBobReboot Roadshow Tour (see last 2 photos for all the cities we’re hitting)! Tickets for the new tour stops go ON SALE NEXT WEEK at the link in my bio! We’re a little over a month away from release and I can’t wait to show you to see the joint we’ve rolled for you! #KevinSmith #jayandsilentbob #movieposter #wearebond #marketing #sabanfilms #JasonMewes #posterdesign #harleyquinnsmith #poster #jaymewes #rebootroadshow

What’s cool is, the poster is in homage to Quentin Tarantino’s recent movie, Once Upon a Time in Hollywood. Kevin Smith’s daughter Harley Quinn Smith was also in that film, and she played one of the girls in the Manson Family.

Besides the OUATIH reference, you can see a lot of nods to Smith’s “View Askewniverse.” You have the infamous Quick Stop from Clerks, plus the Mooby’s uniform from Clerks 2. Jason Lee is also reprising his role of Brodie from Mallrats, and the costume is almost similar save for the Stan Lee shirt that he has on. Besides Lee, the film also has some other appearances from big actors like Ben Affleck, Matt Damon, Joe Manganiello, Rosario Dawson, Justin Long, and Chris Hemsworth.

I’m a big fan of Smith, and I was always a fan of his down to earth, slice of life films. While Jay and Silent Bob isn’t admittedly the favorite film, I’m happy to have Smith in the director’s chair once more. Hopefully this opens doors for Clerks 3 finally.

The stoner icons who first hit the screen 25 years ago in CLERKS are back! When Jay and Silent Bob discover that Hollywood is rebooting an old movie based on them, the clueless duo embark on another cross-country mission to stop it all over again!