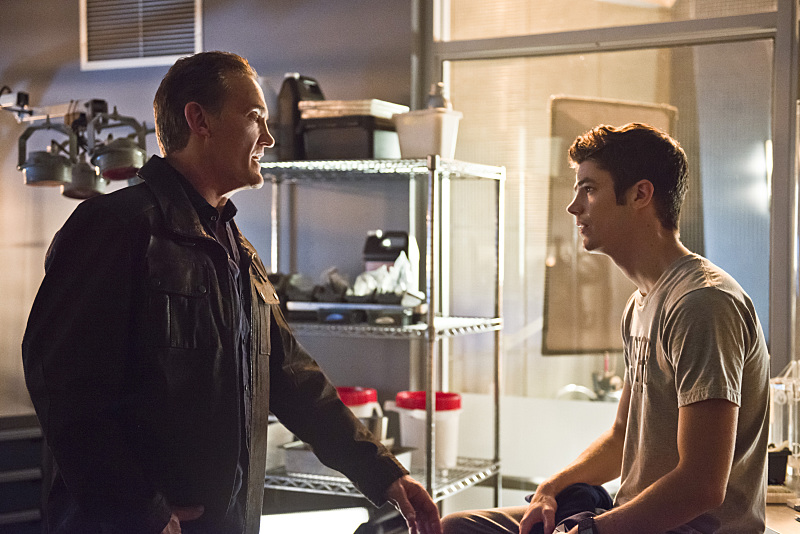 Before getting into the awesomeness that John Wesley Shipp has teased about The Flash going forward, if you haven’t seen the Season 2 finale exit now. Spoilers are below and nothing is off limits.

That just happened. THAT just happened. Let’s take a moment to appreciate the three major seeds that have been planted for the show, as it enters its third season. Zoom has been turned into Black Flash (yes!), Jay Garrick is officially the original Flash from Earth-3 (the suit looks fantastic), and they’re doing Flashpoint! Did we miss anything? It’s certainly possible; the finale was packed, but so well balanced.

John Wesley Shipp’s Jay Garrick/Flash was revealed to be the man in the iron mask, but Shipp wasn’t always the man in the suit. In fact, he didn’t find out about his being the masked man until weeks prior to filming the finale.

“I went up March 1 to shoot my last four-episode arc,” the actor told EW. “I knew that Henry Allen would be dying, but that’s all I knew. I went for my first costume fitting, and I was trying on this shredded [costume], what looked like a prison uniform. I’m thinking, “This is interesting.” Then, a mention was made of an iron mask. Then I had a conversation with Grant and Jesse [L. Martin]. They were like, “Yes, do you know what’s happening?” And I’m like, “Yup, apparently I’m the man in the iron mask.” They were like, “That’s all you know?” “What do you mean, ‘That’s all I know?’ Isn’t that enough?” They said, “You better call Greg [Berlanti].”

After he spoke with both Berlanti and producer Andrew Kreisberg about his being the real Jay Garrick and donning a Scarlet Speedster suit again, he said his “jaw dropped.” Shipp also discussed that when he initially signed up for Season 1, he didn’t want to go the Garrick route because of fan expectations and his desire to do more serious work. However, he praised the way it was handled and is excited for what’s next.

“From the very first moment it was announced that I would be on The Flash, everyone was saying, “He’s got to be Jay Garrick.” That was not my choice. My first choice would’ve been Henry Allen, because it was an acting role, it was a non-costumed character. I felt that, in this medium, I could legitimize myself as an actor with the quiet moments. It was all about the truth of the moment. Now having played that, to turn around and morph me into the character that the audience wanted me to play from the beginning is a brilliant stroke. That they can make it work, I’m still dumbfounded.”

When asked about whether or not his character has a future on the show, John Wesley Shipp was, thankfully, able to reveal his return in Season 3.

“Yes. I’ve been given permission to say that yes, they have all kinds of exciting and interesting plans for me, that are interesting not only in the context of the storyline, but they continue to spin out, which will be very challenging for me as an actor. That’s all I’m allowed to say about that. But yes, I will be back next season.”

Could we potentially see him featured in Legends of Tomorrow as a part of the recently revealed Justice Society? How Barry’s final decision affects Supergirl, Arrow, and Legends is another question begging to be pondered. It must ripple into those shows as well, right? He altered reality, and as we’ve seen in Flashpoint, it alters the reality of all characters. Tell us your thoughts and theories in the comments below.