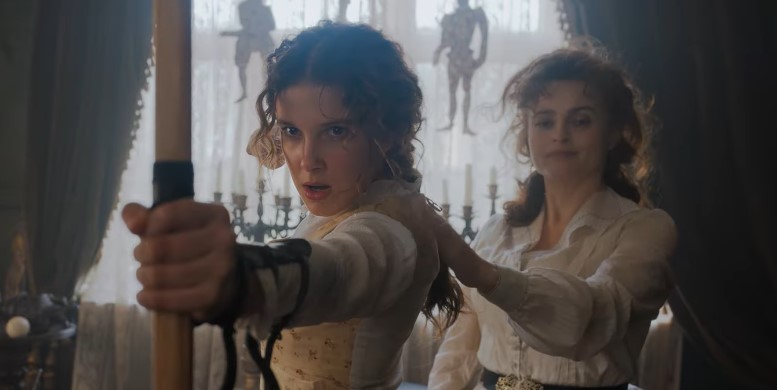 Theaters may not be able to release films, but Netflix is still pushing forward with content throughout the pandemic. Their next big film? A Sherlock Holmes spinoff focused on Sherlock’s kid-sister  Enola Holmes played by Millie Bobby Brown.

When Enola Holmes—Sherlock’s teen sister—discovers her mother missing, she sets off to find her, becoming a super-sleuth in her own right as she outwits her famous brother and unravels a dangerous conspiracy around a mysterious young Lord.

As you can see, the movie has a star-studded cast with Millie Bobby Brown and Henry Cavill both being Netflix A-listers. Besides that, we have Sam Claflin (who is actually younger than Cavill) playing the eldest brother Mycroft Holmes, with Helena Bonham Carter playing the Holmes matriarch.

The movie looks like a good bit of fun. Brown is best known for playing quiet and mysterious Eleven in Stranger Things, but here she’s all bubbly and spunky—a lot closer to Brown’s real-life demeanor. I also think this is the first Holmes story which actually breaks the fourth wall, which could be add a bit of freshness to a classic set-up.

As for Cavill, he’s still as charming as ever. While a lot of people like to bash his broody Superman, I think he does great work in every role he gets cast. It’s still a shame he won’t be coming back as Napoleon Solo in a Man from UNCLE sequel anytime soon.

For now, Enola Holmes is set to release on Sept. 23.