It looks like internet trolls and alt-right hate groups are set on their plan to make Black Panther look like a failure with the ratings on IMBd appearing to be their first stop. 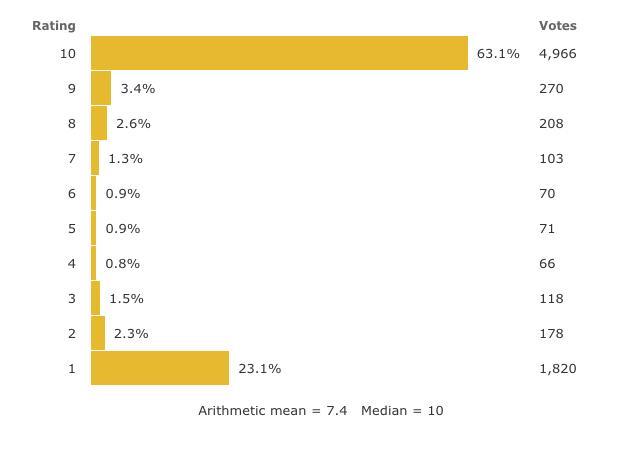 When you head to the Black Panther page on the Internet Movie Database, you’ll see that the current rating for the film is a mere 6.7 out of 10, despite glowing reviews from critics. This score is purely based on a fan vote.

When you look at the breakdown it makes no sense. For one Disney has only shown a handful of screenings so to have over 8000 people review it is somewhat ludicrous. And yes we know this means some positive reviews are most likely fake as well, but that’s bound to happen on sites like this.

Out of all those people, 4,966 people gave Black Panther a 10/10 rating. From there, everything seemed to even out, with the rating scores from nine to two receiving anywhere from 66 to 270 votes. This is where things get skewed. 1,820 people, 23.1 percent of voters, gave the film a 1 out of 10, the lowest score possible. It doesn’t fit with the trend of votes that’s for sure and our guess is IMBd probably realizes this too since it doesn’t fit with normal user behavior for the site.

We get the reason for the hate we’ve had more than one person point out the cast is 90% Black, put that on top of criticism that not a single shot was done in Africa has set some fans off, but here’s the thing having seen the movie the plot makes sense to have a mainly black cast and Black Panther will be in Avengers which is hardly as diverse as one would think. On top of all this, we’re guessing shooting locations were based on tax exemptions more so than anything and we’re just not sure how that works in Africa. The film was shot in areas of South Korea and Atlanta with production saying that “the events of this film do affect the wider MCU moving forward. Since Black Panther and Avengers: Infinity War were filming simultaneously in Atlanta, both production teams worked together closely to ensure a unified presentation of Wakanda in both films, as it also plays a large role in Infinity War.”

Though it’s for those same reasons the hype for the movie is so on point. People are excited about it it’s the first Blockbuster under Marvel to have a mainly black cast and is most likely going to break box office records, this explains the 10 rating, but again with hype, there will always be criticism. All we know is don’t let early reviews sway your opinion see it or don’t, but if you don’t you really will be missing out on a great film because Coogler, Marvel, and all the actors did a superb job bringing Wakanda to life.

Black Panther will hit theaters in the U.S. on February 16.