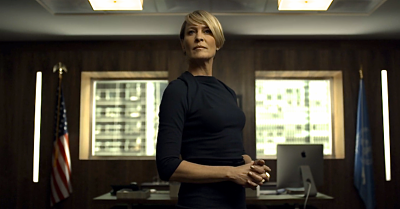 Did anyone expect Netflix just to pull the plug on House of Cards when they fired Kevin Spacey? Well if you did you were wrong Netflix announced that its series sixth and final season would refocus the show on Robin Wright’s Claire Underwood. It makes sense since season 5 ended with Wright’s newly-installed POTUS looking into the camera and declaring “It’s my turn.”

Though it’s not clear how Frank Underwood (Kevin Spacey) will be written out, most likely it will be on off-screen death knowing how these things usually work. The eight-episode final season will “bring closure of the show for fans” said Netflix president Ted Sarandos as reported by Deadline.

A memo to House of Card’s staffers hinted that the production intended to resume in early 2018 sans Spacey. And if you are wondering about Spacey his rep said last month that he “is taking the time necessary to seek evaluation and treatment”.

So are you excited for a centric Claire Underwood season of House of Cards or do you think they should have just scraped it? Let us know your thoughts in the comments below.