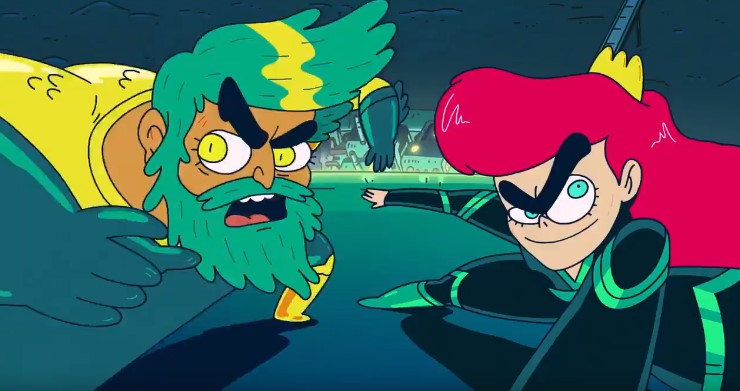 While it may be a while before we get to see the Aquaman sequel, HBO Max and Cartoon Network are going to be bringing the King of the Sea to the small screen with an upcoming show called Aquaman: King of Atlantis.

While a full trailer for the series hasn’t been dropped, we do get a teaser for Aquaman and Mera in the recent sizzle real for Cartoon Network called Redraw Your World. The show gets teased near the end at 1:57:

Here’s the official synopsis of the show (via CBR):

The series begins with Aquaman’s first day on the job as king of Atlantis and he’s got a LOT of catching up to do. Luckily, he has his two royal advisors to back him up — Vulko, the scholar, and Mera, the water controlling warrior-princess. Between dealing with unscrupulous surface dwellers, elder evils from beyond time and his own half-brother who wants to overthrow him, Aquaman is going to have to rise to the challenge and prove to his subjects, and to himself, that he’s the right man for the trident!

While the DCEU has been trying its best to paint Aquaman as a badass, it looks like this series will be embracing the more whimsical side of things, hence the more cartoonish animation. By the looks of it, the designs look similar to that of the rebooted ThunderCats Roar which came out in 2020.

While that show was negatively received by the whole of the internet when it was announced, I personally thought that it was colorful and kooky, and a perfect way to introduce today’s kids to a classic franchise like the ThunderCats; it’s the same appeal with Teen Titans GO!. I’m sure there will be adults in the future who will talk about loving ThunderCats, and they’ll be pointing out this show.

No release date has been made for Aquaman: King of Atlantis, but the series is expected to hit HBO Max sometime in 2021.