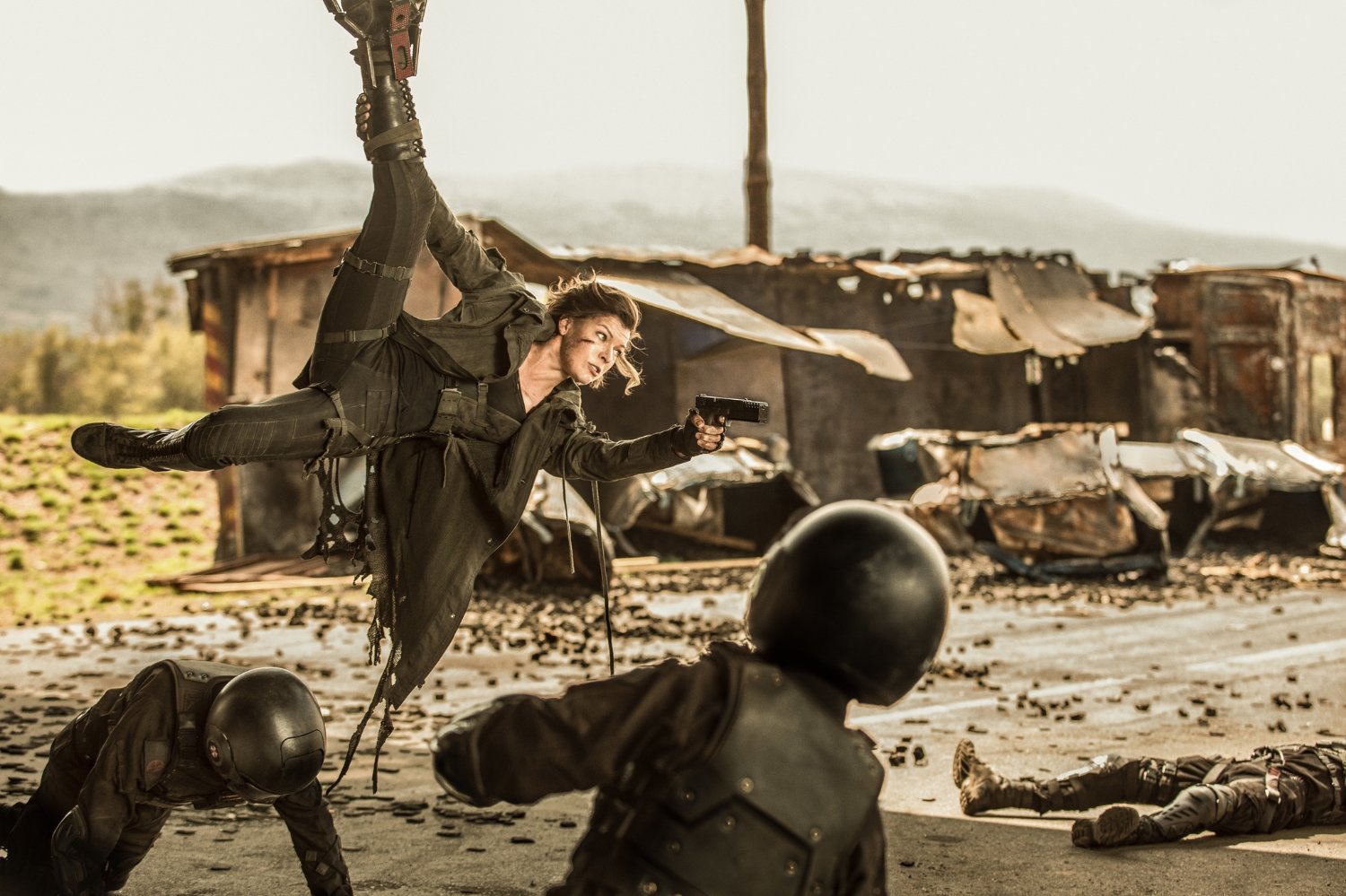 It takes a bit of investigation to discover that this phenomenally lucrative, but undeniably poor franchise is now on its sixth entry. Necessary because it’s difficult to distinguish one film from the other, largely thanks to the incomprehensible plots, character resurrections, and just downright ludicrousness of the whole endeavour. It’s all the more frustrating, because if you’ve played the Capcom video games upon which the movie evolved from, you’ll know Resident Evil is a property with the potential to scare the pants off you.

Paul W.S Anderson has completely ignored this, instead choosing to focus on the action elements of the latter video game iterations. So since 2002’s Resident Evil, we’ve had Milla Jovovich’s Alice kick, punch, and shoot her way through numerous CGI beasties to very little effect.

Now we’re presented with The Final Chapter, and the chance for the numerous plot threads to be abandoned (most likely) or tied together in a satisfying conclusion. At least by the time the movie begins, we can immediately empathise with Alice, because much like the audience, she’s unable to remember anything of what has gone before.

Waking up in an apocalyptic wasteland, she’s met by series regular, The Red Queen, a child hologram who is the manifestation of the inner workings of the Umbrella Corporation, the evil scientists at the centre of the entire T-Virus, world eviscerating plague. Alice is told that humanity has dwindled to numbers who’ll be extinct in a matter of hours, and the only way to stop it is to trust this plum-voiced hologram that has tried to kill her for the past five movies. Along with a group of rag-tag survivors, which include Ali Larter’s Claire Redfield, Alice must travel to Racoon City and find the anti-virus.

That there is a refreshingly simple ticking clock plot, which is so welcome in a franchise that has done its best to over complicate things in the past. The linear, A to B way in which The Last Chapter unspools makes it easily the most enjoyable entry in the series. This however, doesn’t mean that it’s any good.

The script is a complete mess, with everything happening by chance, and no moments in which the film can breathe. Early on Alice defeats a couple of zombies, one of which is an aquatic attack that quickly reminds you how visually incoherent the editing of the action sequences in these films are. In a heartbeat she’s in a car, and then bang, her tyres blow out, and then boom, she’s kidnapped by a gang. No time is taken to round Alice as a character who can think, investigate, and move the plot forward as an individual. She’s just someone that stuff happens to.

The dialogue also continues to be leaden. If this is a nod to the infamous way in which the early Resident Evil games featured some laughable voice acting, then bravo to the filmmakers, but if not then stock lines such as “Grab some gear, you’re going to need it” and “I’m me, he’s not me” are clunkers of the highest order.

The Final Chapter does have some redeeming features if you can put aside the amateur hour filmmaking. There are some neat set-pieces scattered throughout. The creature design is impressive and in-keeping with the games, particularly the bat-outta-hell opening chase. There’s also a lovely little cable car zombie attack which has a subtlety sorely lacking in the rest of the movie. And a return to the laser filled corridor from part one results in a series best fight sequence.

The lack of threat, especially when you consider how frightening the games can be, has always been an issue with these films. Game of Thrones Iain Glen carries some gravitas, but the zombies are now a CGI side-issue, and fan favourite character, Wesker, has always felt like someone who has danced over from the set of a Pet Shop Boys video.

As always, it’s left to Milla Jovovich, who is so deserving of a decent script to match the way in which she invests so much into Alice, to carry the film. Both physically, and with the few decent lines of dialogue she’s afforded, her performance has always been the sole reason to stick with this nonsense, which admittedly, sixth time around, is the best it has been.