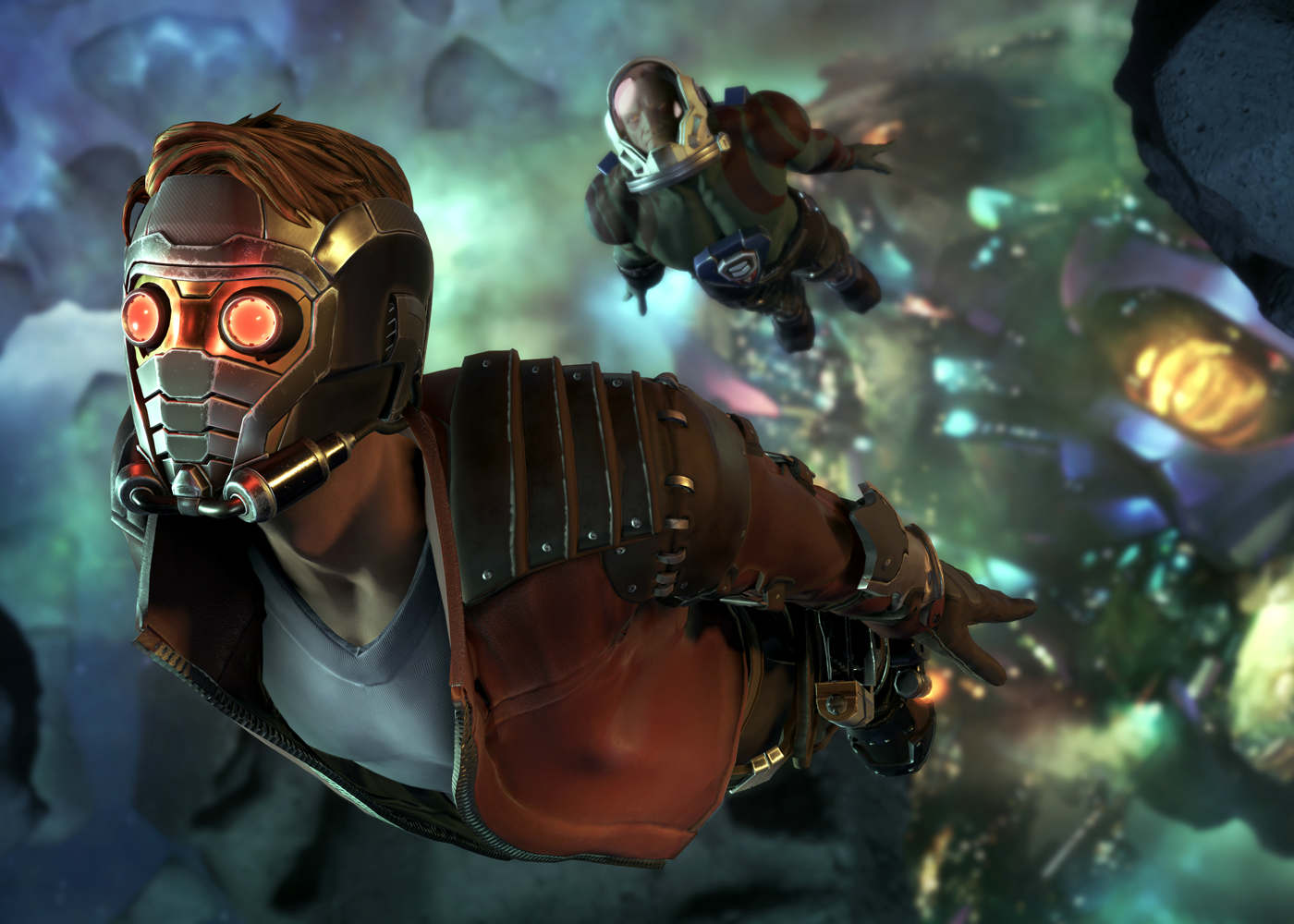 Guardians of the Galaxy (GotG) stands as a shining example of Marvel’s ability to breath life into a comic franchise that not only wasn’t well-known, but might not have made the same impact on audiences had it been taken under the wing of any other studio. I was one of many who had no prior experience with the story. My first impression of the series following a viewing of the initial film trailer was to ask my brother why the story involved a talking raccoon (sorry, Rocket). Nevertheless, I was won over, talking raccoon and all, in the end. Like Marvel, Telltale has a knack for finding what makes a franchise successful and imbuing that same life into their games. Happily, though the game does suffer from the few peculiarities that are native to Telltale titles, fans should be delighted to know that Guardians of the Galaxy: A Telltale Series is just as engaging and enjoyable as one would expect from a ride along with Peter Quill (Star-Lord) and his crew.

Hooked on a Feeling (The Game Gets the Mood Right)

Right from the onset, the game makes you feel those same positive vibes Marvel set the tone for in the first film. As I navigated the options menu, I was treated to a loud rendition of Livin’ Thing by Electric Light Orchestra. Then, during the loading screen I noticed a small cassette tape appear on the lower right side of the screen. A nice touch. The first scene opened, appropriately, with Star-Lord bustin’ moves to the music coming out of his beloved headphones before the game thrust me into making a decision that set the course of the rest of the game.

While the game doesn’t necessarily directly jump off of the first film, it does a great job of tying in familiar character struggles and situations the audience of the film franchise will know. I was already acquainted with most of the characters I came into contact with, had an understanding of their histories, and had already been introduced to the things that brought our team together as well as the character traits that would eventually threaten to tear the team apart. This is where the game shined brightest.

Telltale’s ability to capture each character’s personality so well was what first pulled me in. Taking the helm of Star-Lord was a blast, particularly because it gave me the freedom to be an asshole to friends and strangers alike (a funny and loveable asshole, of course). And everyone else’s personality quirks were fully on display. I had to carefully manage Rocket’s stubbornness while keeping in mind his need for belonging and to feel like a productive part of the team. I had to counsel Gomora on family matters, keeping in mind certain members of her “family” have a penchant for mass murder. Grooot . . . well, Groot is Groot. Drax brought with him his regrets about the loss of his wife and child, his need for vengeance, and on an always-entertaining note, his stark literalism. At one point, Drax prompts Star-Lord to give a rousing speech as we prepared to enter our first major battle. I decided Star-Lord wasn’t much of a speech giver, so I had him say so. Drax, true to form, responded with “Your humbleness makes you appear cowardly. I will try to forget this.” The game told me he’d remember that, however, so I felt a need the rest of the game to prove my bravery to Drax (you know, as Star-Lord).

O-O-O-H Child (Exploring More of the Past)

In order to avoid spoilers, I won’t get too heavily into the actual plot, but as entertaining of a story as it is (and it will definitely leave you excited for the next episode), what grounds the whole thing is that even at times when you don’t think your choices will have a necessarily devastating impact on the story, you still care what choices you make. Why? Because you care about the characters you already know so well. Because you want to keep the team together even when they don’t see a need, and eventually in a time of crisis when the galaxy needs guardians once again.

The game also gives us more insight into Star-Lord’s past. In the film, we learn at the beginning that his mother died when he was a young child. But, the game carries their relationship beyond a Disney-film cliché and into an integral part of the plot of the game series. I won’t give away how. But, having opportunities to see our hero as a young boy, his relationship with his mother and the struggles they dealt with together makes an already likable character into someone we can all relate to even more to one degree or another. At least, most of us remember turbulent years growing up when we clashed with our parents as we were trying to figure out who we were and they were trying to shape us into a productive adult. It is moments like these that ground the story even as it reaches intriguing heights of sci-fi mystery and mayhem.

The only downsides to the game are those common to other Telltale titles. Quick time events, of course, are a staple and much like other Telltale games, the player is given ample room for failure. If you aren’t particularly good at reacting to button prompts (like me) then it is nice to know that while failure is always an option, death is much less likely. I only died once, actually, and largely because I didn’t see the prompt in time. But, the downside is the game doesn’t feature much of a challenge regarding controller skill. The puzzles, too, are fairly simple and straight forward with just some patience and a willingness to look around. When the character is asked to move freely, the controls always feel awkward as if just thrown in because, after all, it is an interactive game and not a film. But, in the end, Telltale games aren’t about the controls, but the choices.

Come and Get Your Love (Seriously, you’ll love it)

It might be true that Telltale’s offerings resemble an interactive comic more than a traditional game, but they never fail to deliver on story. Guardians of the Galaxy: A Telltale Series delivers even more of what made the first film so successful. Delving further into Star-Lord’s past, playing an integral role in the lives of the guardians, and finding a way to keep our team together as perhaps the most unlikely family in the universe makes a tale that will make you laugh, keep you entertained, and often pull on your heart strings. Sure, it would be great if the game offered a little more of a challenge, and this first episode didn’t ever really feel like any of my choices would create a seriously divergent story path, but it was hard to tear myself away from the screen until the first part of the tale was told.

Episode 2 of Guardians of the Galaxy: A Telltale Series has been given no concrete release date, but should be available sometime in the next few weeks.

Guardians of the Galaxy: A Telltale Series Episode 1

Telltale’s first foray into its series on Marvel’s band of misfits turned galactic heroes finds its groove right off the bat and doesn’t miss a beat. Everything that made the characters so engaging in the film flows into the storyline. Despite the same flaws that pepper every entry in the Telltale library, the game will pull at your heartstrings as it takes you along for a memorable ride with some of your favorite hooligans . . . we mean, heroes.