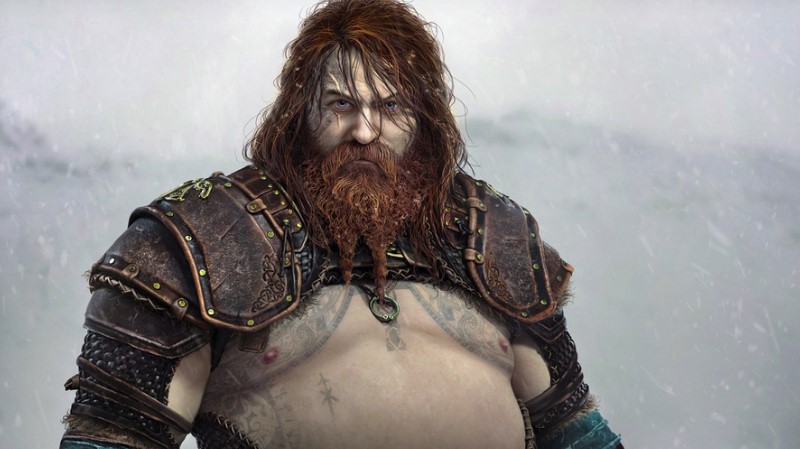 The last God of War game had teased a clash between Kratos and the Norse god of thunder Thor, and last week saw the official look at the Son of Odin. What’s odd is, people are now griping/praising the decision to give Thor a heftier look.

This is Thor in God of War: Ragnarok:

Though some fans were expecting Thor to be just as built as Kratos (or Marvel’s Thor, Chris Hemsworth), Ragnarok had decided to give their Thor his own unique look by basing him off of the actualy mythology where Thor is a war-hungry glutton of a god.

Of course, some fans were up in arms against this look for Thor, saying he doesn’t look ‘strong’ enough. Another chunk of fans, love the look of this God of Thunder. Not only does he feel original and fresh, but his body is also reminiscent of people with actual functional strength who join Strongman competitions:

People are saying he's "obese" and shit. People have no idea what actual functional strength looks like. Chiseled muscles are for appearances only.

This is one of the strongest men on Earth, Mark Henry. Looks "obese" right? He could probably crush your head like a melon. pic.twitter.com/q8tHlGVmRn

this doesn't intimidate you? that's the kind of bodies the strongest people in the world have pic.twitter.com/M9I1TD3xfW

I, for one, love the look, and I’m excited to see Thor clash with Kratos in the next game. What are the odds that Mjolnir will become a useable weapon in Ragnarok? If you’ve followed the series, you’ll know that Kratos always gets a bunch of new toys to slay monsters and traverse worlds with.

Along the way they will explore stunning, mythical landscapes, gather allies from across the realms, and face fearsome enemies in the form of Norse gods and monsters. As the threat of Ragnarök grows ever closer, Kratos and Atreus find themselves choosing between the safety of their family and the safety of the realms…

God of War: Ragnarok comes out sometime in 2022 for the PlayStation 5.