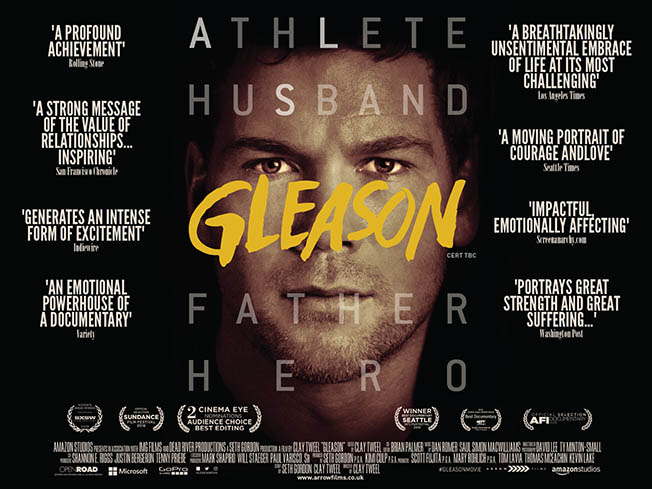 Few stories are as indelibly moving as that of Steve Gleason. A feted NFL football star, whose bravery on the field found him at the centre of one of the most iconic sporting plays in the New Orleans Saints history. Not only was it a piece of peak athletic prowess, but it came at a time when his city was recovering from Hurricane Katrina, and was an emblematic act of hope and rebirth. But that wasn’t Gleason’s story, his was about to begin.

The core of Clay Tweel’s documentary can be found in Gleason’s post-NLF life, when a routine check on some aches and pains in his body delivered a blow more powerful than he could have received from any offensive line, and he was diagnosed with amyotrophic laterals sclerosis, commonly known as ALS.

What this meant for Steve, was that over a period of time lasting anywhere between two and five years, his brain’s ability to communicate with the rest of his body would deteriorate, leading to a shutdown in vocal ability, faculties, and eventually what we all take for granted, breathing.

A born fighter, his inspirational decision to tackle the disease head-on is made that much more resonant when his wife Michelle announces that she’s pregnant with their first child. A life-changing piece of news that prompts Steve to make a video-blog for the child he might never see, let alone play catch with or even hold. And this is the world we’re privy to; a very personal, heartbreaking one that demands to be seen.

It’s the intimate moments that strike an unavoidable chord with Gleason. There’s the post-diagnosis moment in which we watch Steve filling a doorframe, holding onto it in a subliminal act of physical denial. Making himself as big as possible, knowing that the disease will diminish his powerful physique. As soon as four months later, we’re shown him taking part in a charity swim, in which he struggles to cross a small river, but more painfully, the reaction of his wife Michelle, as she watches her husband at the mercy of this unrelenting illness.

Scenes such as these come to a head when Steve speaks into the camera as he’s on the threshold of losing his speech, and summoning from the depths of the strength that has served him his entire life claims ‘I want to punch something, but I can’t’ before screaming. It will break your heart. But for Tweel, and the family Gleason, it isn’t these moments that should stick with you.

It should be the scene in which he strides onto a pitch he once commanded, tears in his eyes, and raises a defiant fist in the air. It’s as iconic and rousing as anything he ever did on that sports field. Or the very human moment, of which there are many, when Michelle, who gives so much to this incredible family, puts aside any pre-birth worries by claiming that it was ‘so easy’. Even through the hard times, one in which Steve is given an emergency enema, this family find the things which make life worth living. As Steve himself says, this isn’t about a right to die, but a “right to live”.

Gleason isn’t an easy watch, and if you feel you’ve gone through the wringer, spare a thought for those that you’re watching. This is raw, educational, utterly terrifying, but ultimately inspirational cinema about remarkable people that changes the way you look at your own life.