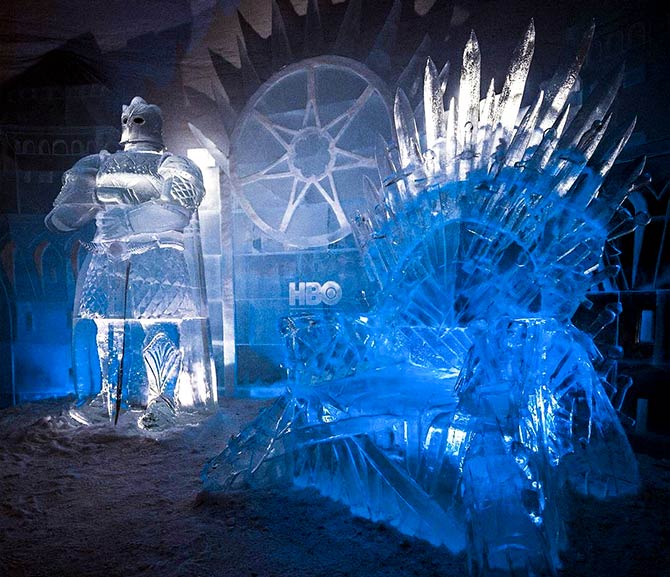 Game of Thrones fans were treated to a new season of the HBO hit last summer. It was generally well-received and considering how the finale ended, it is no surprise how followers of the show are already looking forward to the eighth season premiere.

It may be more than a year until Season 8 is released, but in true Game of Thrones fashion they are offering another outlet for fans to get their GoT fix from – that is if they are willing to travel to Finland and experience the splendor of Westeros in real life.

Recently, a hotel in Finland partnered with HBO Nordic and opened a pop-up hotel inspired by the network’s hit fantasy television show. Lapland Hotels announced the theme for their yearly Snow Village that this year happened to be Game of Thrones. This project spans 24,000 square feet across Kittila – an area a little less than a hundred miles from the Arctic Circle. It has required more than 40 million pounds of snow and 770,000 pounds of ice crafted by professional ice sculptors and artists.

Just check out some photos from the inside of the Winter Westeros from their official Instagram account:

According to Tomi Kurtakko, the person who helped with the Game of Thrones Lapland hotel project, the negotiations with HBO have been pleasant and positive. The discussions mainly revolved around the extent of what the hotel can do given the content HBO provides:

“The question was mainly about the level of snow and ice sculptures, and what was possible to do and what did not.”

Likewise, Nina Palmroos, an executive from HBO Nordic, has since gushed about the project. The executive explains that the popup is a great treat for loyal fans of the show:

“We found it a wonderful idea. Some of the world’s best ice sculptors have done very detailed and thorough work. Fans are very loyal to the series and this gives them a chance to experience something unique.”

The Lapland hotel Game of Thrones popup allows fans to live out their GoT fantasies. Visitors can sit on the ice Iron Throne or walk through the Braavosi Hall of Faces, which unsurprisingly is also made of ice. The rooms range from $240 to $600 for the suite. The hotel advises visitors to only stay a night because of the freezing temperatures. For those within a budget, there is no need to book a room in order to enjoy the amenities. They can have drinks at the GoT-themed bar and enjoy the sights. The pop-up hotel would be open until April of this year.

The premiere date of Game of Thrones Season 8 has yet to be announced. However, according to Casey Bloys, president of HBO, has explained that the eighth season might only have six episodes that might run for two hours each:

“We haven’t had that discussion yet because I don’t know how long the episodes are gonna be. Two hours per episode seems like it would be excessive, but it’s a great show, so who knows?”

Check out a video of the Hotel below: