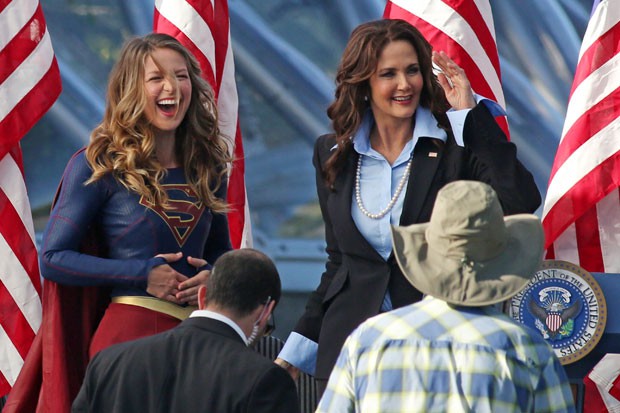 Besides Superman’s arrival, nothing has been quite as awesome on Supergirl this season as seeing President Wonder Woman. Lynda Carter guest starred in an earlier episode, bringing along the news that Supergirl’s Madam President isn’t what she seems. Aside from a mystery jet (probably of the invisible variety), she’s also harboring an alien secret of her own. For now, it’s unknown if and when the Wonder Woman TV series actress will return. But it’s interesting that she could have appeared on another Arrowverse show.

During The Flash’s episode of the Invasion! crossover event, the POTUS is abducted. According to Arrowverse executive producer, Marc Guggenheim, Lynda Carter nearly appeared in the role. In fact, the script was written with her character, Olivia Marsdin, in mind. One realization set their plans on a different course, though.

“We did, actually [consider having Carter be President on Earth-1],” Guggenheim said (via Comicbook.com). “In the first draft of the script, she was the vice president who becomes the President, and we got a note from the studio which we think was pretty fair, which was that it was a bit too confusing. You get into the parallel Earths of it all but she’s not the President on our Earth but the Vice President. In the midst of time travel and aliens, it was just one sci-fi problem too much.”

It’s an excellent point. Distinguishing between Supergirl’s Earth (which we now know is Earth-38), especially for the crossovers, is key in quelling confusion. Although it would be nice to know what Lynda Carter’s character is up to on Earth-1. Is she in politics at all? Or, better yet, is she on Themyscira?! Tell us your thoughts and theories in the comments below.

The Invasion! crossover continues Wednesday night on Arrow’s 100th episode, before Legends of Tomorrow draws it to a close December 1.