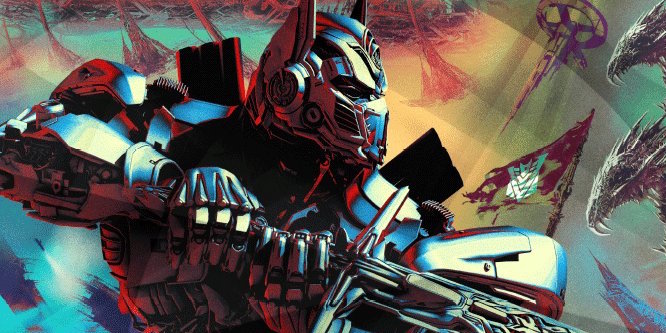 Paramount has unveiled the first trailer for the Transformers franchise’s fifth entry, The Last Knight.

This first look raises numerous questions. Chief among them being whether or not that weird planetary orb-thing is Unicron. If so, could the planet-devouring being be headed straight for Earth? In Age of Extinction, Optimus Prime left to pursue the Creators. His success is not yet known; however, rumors (via JoBlo) suggests he may have wound up back on his home planet, Cybertron. In an effort to save his world, he’ll need a particular artifact. One that, you guessed it, is somewhere hidden on Earth. The key to finding said artifact, continues the speculation, is found within Arthurian lore. Apparently, Merlin is at the very center of it, as speculation states the sorcerer attained his powers courtesy of coming into contact with a Transformer. The artifact, if any of this is founded in truth, will likely be connected to the sword, Excalibur.

An interesting shot in the trailer also gives credence to another bit of the rumor. Allegedly, in Prime’s absence, Bumblebee takes the role of leader. Could their fight in the trailer be in relation to a power struggle between the two Autobots? It’s certainly within the realm of possibility. However, it could also be that Optimus Prime’s mind is being effected by dark energon. In the film’s promotional material, Prime is depicted with bright purple eyes, as opposed to their normal blue color. It makes sense that while he was away something or someone got to him, imbibing him with dark energon.

Another question raised is how far into the film does Prime’s floating body come into play? Is that a shot of his corpse… Perhaps he comes into contact with dark energon postmortem and lands on Earth ready to fight whomever gets in his way. There are so many possibilities; all of which could be either right or wrong. Let us know your thoughts and theories in the comments below.