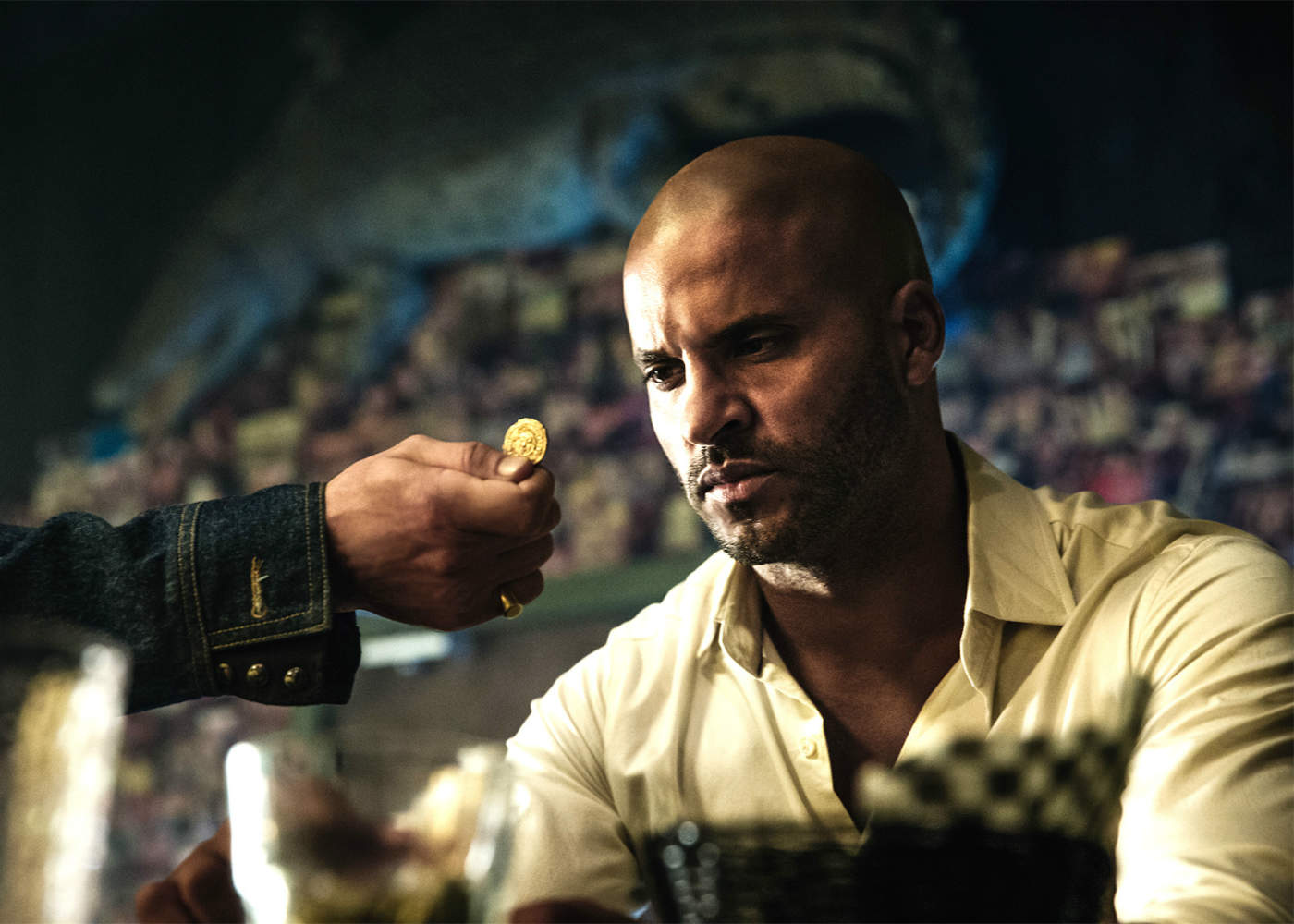 American Gods has certainly got everyone talking. An adaptation of Neil Gaiman’s book of the same name, the show has become a huge hit for Starz and is already renewed for a second season. Gaiman serves as an executive producer on the show, with Bryan Fuller (Hannibal) and Michael Green (Logan), as showrunners. Ricky Whittle stars as Shadow Moon, a recently released convict who is mourning the loss of his wife, Laura (Emily Browning). On his journey home, he encounters the mysterious Mr. Wednesday (Ian McShane), who takes Shadow into a journey of the unknown, where old Gods travel across the country to try and defend themselves against the new, younger Gods that are on the rise. The show has enjoyed huge critical acclaim, with good reason, and ahead of the season one finale, we spoke with Ricky Whittle about the impact the show has had, the journey of his character, and what season 2 could have in store.

Congratulations on the success of American Gods. It feels like everyone on the show encapsulates their literary characters perfectly. What stood out for you, with the character of Shadow, that you wanted to bring to the screen?

First of all, huge props to the casting directors who have taken this book to screen so well. Even reading the book myself, I remember I envisaged Ian McShane as Wednesday, mainly thanks to my mum. She said she thought Ian McShane would make a great Mr. Wednesday, and then 2 weeks later he was cast. When I read Czernobog I thought of Peter Stormare and then he was cast. So I read the book, and I had a five-month audition process which took a long time to get through, but it also allowed me time with Bryan and Michael, the producers, and David Slade, the director of the first couple of episodes, to really work this character out, and take him from the book to the screen.

Early on in the process, I was very much tied to Shadow from the book, so I was very blasé, very chilled. In the book, when Laura shows up in Shadow’s hotel room, he’s like ‘I can never be scared of her. Dead or alive, I will always love Laura,’ which is beautiful. It’s so well written, and it’s wonderful. But in real life, I don’t care who you are, if your partner comes back from the dead, you are going to freak out. That’s the kind of element we wanted to add to Shadow Moon in the TV series. We wanted to make him real, make him grounded. We wanted to give him anxieties, fears, make him more vocal. One of the toughest parts of my job, is Neil (Gaiman) writes these beautiful inner monologues, but we don’t narrate the show, so I have to portray all these wonderful moments and how he perceives these circumstances that he keeps finding himself in, through looks. I have to go through the process internally, and it’s tough to do that.

I also have to refrain from giving him too much of a personality right now. If you’ve read the book, you’ll know where Shadow has got to go, and I wanted to start off by playing him as an empty vessel; a shadow of his former self. He didn’t know his father, his mom died when he was young; he had nothing in the world until he met Laura. And then he lost everything. So I had to start him with nothing, which then made him so vulnerable for Mr. Wednesday to take along. I’m looking forward to watching Shadow grow, and seeing how people react as he becomes more confident; more awakened in this world of magic that’s been forced upon him.

As Executive Producer, what input did Neil Gaiman have on the show?

From the very beginning, he got 600 audition tapes for Shadow Moon, out of 1200. So he was involved in the casting right from the start. That’s where a lot of the pressure dissipated for us, because if Neil Gaiman is happy with something, then the fans have to be happy, because it’s his baby, his show, and he’s not going to greenlight anything he doesn’t like.

Did he give you any specific advice regarding Shadow?

He doesn’t give any advice whatsoever. He loves what we’re doing, how we’re bringing these characters to life. He just tells us stories about where certain characters come from, and what he was thinking of at the time of writing. It’s very insightful. So we spoke about where Shadow came from, and who he is, and where Mr. Wednesday came from, and so on. It’s fun picking his brains, but as far as performance goes, he’s just happy to watch. He’s enjoying the show, just like we all are.

That’s because they got the casting right.

It is. At the end of the day, when you cast that calibre of people – Ian McShane, Gillian Anderson, Pablo Schreiber, Peter Stormare, you just let them go play. We also have the most incredible crew. We’ve just been really fortunate to have an incredible team to put all this together. The ensemble cast is amazing, and there’s nothing like it on TV. Scenes like the gay Moslem sex scene are seen as ground-breaking, but they shouldn’t be. It’s a shame, in a way, because it touches on topics that should be told every day.

The show is so incredibly visual and relies on a lot of special effects. What’s it like for you to see the finished product?

It’s very different. You have scenes with just me and Ian McShane in a car, and they’re great fun to do. But you know what those scenes are. That was a fun scene, that was an intense scene, that was a shocking scene. But when you do your thing against a blue background or on a green screen, and then they add things around you, you almost watch like a fan for the first time, because you don’t know what they’re going to do. So I watch, and I’m like ‘Oh wow! I get it now. That’s what you were doing there.’ It really is a lot of work. There’s a lot of stuff added in that people don’t know about, and that’s what I find magical. You know there’s not a buffalo with flaming eyes walking towards me. But what you don’t know, is that Mad Sweeney is not pulling out all those coins; that’s CGI. And what you don’t know, is some of those landscapes are in a studio. So in episode 6, where Mad Sweeney and Laura are talking at the side of the road, that incredible landscape vision is our post production team. They added all of that in. I watched them do it.

Can we expect to see Laura and Mad Sweeney catching up to Shadow before the season finale?

We will. We will see them finally catch up with their prey, so to speak. Laura’s very focused. It’s interesting to see this woman, who, while Shadow was alive, took him for granted. It’s a beautiful story, where she hasn’t really begun to live until she dies, and she all of a sudden found this love that she was missing, and now she’s chasing it down. So we will see them catch up. It’s a lot of fun, that stuff (with Mad Sweeney and Laura), because that’s the stuff that’s not in the book.

We’re near to the season finale now, and the first season stops around a third of the way through the book. Do you think that we’ll see more of Gaiman’s spinoff books incorporated, such as Anansi Boys?

We stop about a fifth of the way through the book, actually. It stops at House on the Rock; about 120 pages into a 600 page book. As Ian McShane puts it; the book is a great blue print for a TV show, and we’ve been able to flesh out characters that are very sporadic in the book, like Laura and Mad Sweeney. If we went word for word with the book, we’d probably have about 3 seasons, but because we’re able to flesh out so many scenarios, and have stand-alone episodes like Laura’s story in episode 4, and Mad Sweeney’s story in episode 7, it gives us a lot more. Neil Gaiman is writing a sequel to American Gods as we speak, and then there’s his spinoffs like Anansi Boys, Monarch of the Glen, Black Dog, so we really do have legs to go for years to come. Bryan Fuller described it as The Avengers but with Gods. There’s the potential for American Gods to have spinoffs itself, like Fear the Walking Dead, for example. We could follow Mr. Nancy and the Anansi boys, and maybe Shadow could feature in that. It could run alongside (American Gods), and co-exist. You never know. There’s just so much scope for it. It’s an exciting time for the show.

Do you think that we’ll see season 2 picking right back up where we left off?

Without doubt. It has to. The season one finale is not in the book. I, as an actor, have no idea what they’re writing for season 2 right now, and I’m chomping at the bit. The cliffhanger is epic. It’s like ‘What? You can’t just leave it there, no!’ It’s incredible, and because it’s not in the book, it’s completely fresh. I’m intrigued to see what Bryan and Michael come up with; how they tie it into the storyline, because we do follow the book, but this isn’t a part of it. The way it’s written, it does have ramifications for the rest of the story going into season 2.