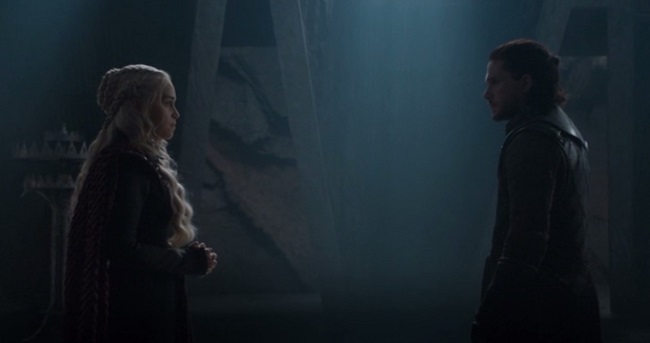 Game of Thrones is set to end with its eighth season next year, and HBO is going all out to close one of the biggest shows in television history. Thanks to Entertainment Weekly, we have a new image of Daenerys and Jon together, plus Emilia Clarke and Kit Harington share their experience when it came to shooting for the past year.

Harington explains that the production was a lot more intense this time around, with showrunners David Benioff and D.B. Weiss wanting everything to be perfect for the finale. Harington says:

“It’s relentless; scenes that would have been a one-day shoot five years ago are now a five-day shoot… They want to get it right, they want to shoot everything every single way so they have options.”

“[Camera] checks take longer, costumes are a bit better, hair and makeup a bit sharper — every choice, every conversation, every attitude, has this air of ‘this is it.’ Everything feels more intense.”

Though it hasn’t been made clear until last season, the entire show was building up to Jon and Dany coming together, hence the title of The Song of Ice and Fire. Though the relationship is basically incest, it seems that a lot of people are willing to stomach it granted that there’s so much great chemistry between Clarke and Harington onscreen.

Plus, it’s said that the show will have the characters fully aware of their incestuous relationship, and it’s said to be one of the sources of drama.

For now, the cover will probably be what we have of the show in the meantime. Granted HBO will release some more material as the premiere date draws nearer.

Catch Game of Thrones 8 when it airs on HBO sometime next year.