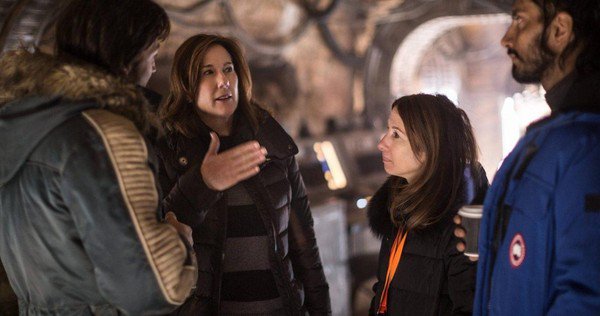 It is safe to say that Solo: A Star Wars Story ended the new franchise’s winning streak. The movie was received by fans and critics relatively well. It holds a respectable 71% on review aggregator website, Rotten Tomatoes. Nevertheless, it did terrible in the box-office.

Reportedly, the movie had a production budget of $250 million. It needs to earn at least $500 million in order to recoup the production and marketing expenditures. As  of this week, the total worldwide gross of the film only clocks in at $354.8 million. Solo: A Star Wars Story is the lowest grossing live-action Star Wars film to date.

With the abject failure, Disney is looking to make extreme changes. According to the rumor mill, the company is planning to boot Lucasfilm president, Kathleen Kennedy.

Grace Randolph from Youtube’s Beyond the Trailer was contacted by a source who says Disney is planning to fire Kathleen Kennedy. According to the source, Star Wars executives recently convened on a secret conference call. Marvel and Pixar execs were in on the conference in order to give their advice on how to fix the current situation:

“There was a call, a secret conference call with all the top Star Wars brass in attendance, the kind of call where, apparently, security guards stand outside the different conference room doors and makes sure that no one eavesdrops. But here’s the kicker. Top brass at not only Star Wars, but also Marvel and Pixar, were also in on the call, but listening only, likely at the request of Bob Iger, who wants their advice on how to fix this s–tshow. And yes, he does know it’s a s–tshow” revealed Rudolph.

The source confirms that the execs want Kathleen Kennedy off of the Star Wars franchise. Several people have already been approached to take over. Problem is nobody wants her job:

“The word that he wants Kathleen Kennedy out. He actually does, but, nobody will take her job. Several have been approached, but turned down, including J.J. Abrams, who turned it down flat and didn’t even hesitate.”

In the same video, Randolph fleshes out the reason why it has been so hard for Disney to find a replacement for Kathleen Kennedy. After all, notwithstanding Solo: A Star Wars Story, the franchise has always been successful.

The Youtube commentator explains that people in Tinsel Town do not like getting involved with risky ventures. Whoever takes over Lucasfilm has to deal with a divided front:

“Why does nobody wanna run Star Wars? Well, it’s probably pretty obvious for many of you, but let me spell it out for you. And that’s in risk-averse Hollywood, nobody wants to run a house divided, which apparently is what Kathleen Kennedy has created. It’s divided between her loyalists, which she brought in and wear those “Force is Female” t-shirts, and the loyalists to the brand itself that were there before Kathleen.”

Neither Disney nor Kennedy has yet to speak out about the persisting rumors. At this point, no announcement has been made regarding another Solo movie.