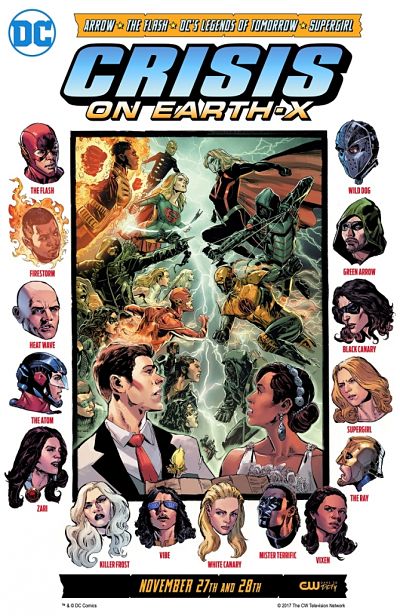 The CW is back with another epic DC Superheroes crossover event for 2017. This time they’ve taken it straight out of the 1970’s and 80’s comics and brought to life “Crisis on Earth X” which pays homage to the classic JLA/JSA crossovers from the Silver and Bronze Ages of comics. These stories, of course, were from the DC Multiverse concept which The CW relies pretty heavily on especially to pull crossover events with Supergirl who lives on an entirely different earth. This, of course, should culminate in Crisis on Infinite Earths, which has been hinted at over the years, but that’s a story for another time…

For now here is the synopsis for Crisis on Earth X:

Barry (Grant Gustin) and Iris’s (Candice Patton) wedding brings the gang together, but things go awry when villains from Earth-X attack the ceremony. All of the superheroes band together with help from their super friends like Citizen Cold (Wentworth Miller), The Ray (Russell Tovey), Felicity Smoak (Emily Bett Rickards), Iris West and Alex Danvers (Chyler Leigh) to take on their most formidable villains yet. Earth’s mightiest heroes – Green Arrow (Stephen Amell), Supergirl (Melissa Benoist), The Flash (Grant Gustin) and White Canary (Caity Lotz) – lead their teams into battle to save the world.

And now the full trailer for Crisis on Earth X is here, and as most people guessed beforehand, it is taking place during Barry and Iris’s wedding. Personally, we’re pretty excited for this especially after last years invading aliens storyline left us feeling underwhelmed. We mean if you’re going to bring these characters together you might as well show an epic battle, and we just didn’t feel like we got that from last years crossover event.

This crossover event will be even more interesting than before since not only will they be fighting their evil foes and doppelgangers from another earth they’ll also be facing Nazi’s. This is because on Earth-X Germany won WWII which if you ask us makes this feel more like “The Man in The High Tower” than the DCEU, but we suppose in 2017 Nazi’s are in.

Not that we mind since this will be bringing back our superhero’s including the soon to be exiting Captain Cold so it should be interesting to see how they all come together to help fight their enemies from another Earth.

What do you think of this storyline? Will you be watching or are you over these crossover events? Leave your comments below.

Be sure to tune in during the following dates and times so you don’t miss any part of the event.

Supergirl will kick off the crossover on Monday, November 27 at 8 p.m.

Arrow will then be passed the baton later that night (on a special, non-timeslot airing,) on Monday, November 27 at 9 p.m.

The Flash continues pushing the storyline in the Speed Force on Tuesday, November 28 at 8 p.m.

Legends of Tomorrow will host the culminating chapter that same night on Tuesday, November 28 at 9 p.m.