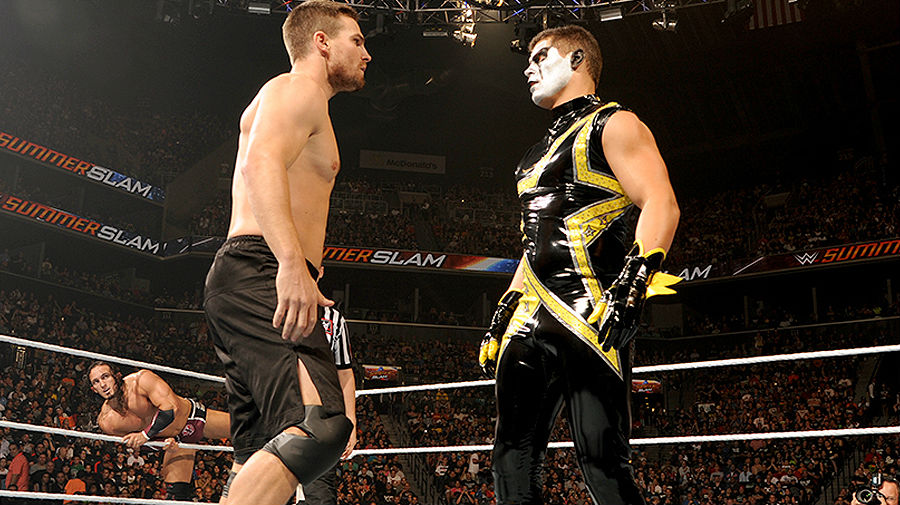 During the Heroes and Villains Fanfest, Stephen Amell announced Cody Rhodes’ guest star appearance. The actor then tweeted a confirmation no his personal account.

I step into this respectfully, humbly, and looking to do it justice for the fandom #HVFF @CW_Arrow pic.twitter.com/UbU0lzG4df

Cody Rhodes is well known for his Stardust persona in the WWE, where he and Amell first met. Their meeting escalated in the public eye, as the two exchanged shots on Twitter. The feud culminated in the two battling it out in a tag team bout at SummerSlam last August. Rhodes later reignited the feud as he crashed the actor’s Dallas Comic Con panel earlier this year, offering a singles rematch. However, since Cody Rhodes was released from the WWE in May, all has been relatively quiet. Until now. The announcement at the Fanfest was recorded, and Amell aired it live on his Facebook account. You can check it out below.

“Hey before we get going,” Amell began the discussion, which featured Rhodes, “we have an announcement. We have a new guest star on Arrow this year. Mr. Cody Rhodes.” Rhodes jumps up in excitement, before the two share a handshake, further confirming the collaboration many fans have been anticipating. “I’m so fired up about this guy,” Amell continues, “you know, he and I haven’t had much of a chance to talk about it. But we’ve been friends for a little over a year, and I know that Cody has really wanted to get into the acting business. And he went to LA and he went for a part, the deal closed yesterday and the dude’s gonna be on Arrow and I’m so pumped up!”

Aren’t we all? Who Rhodes will play and how much he will be involved is unknown, but it is exciting news nonetheless. Arrow returns this fall on October 5.