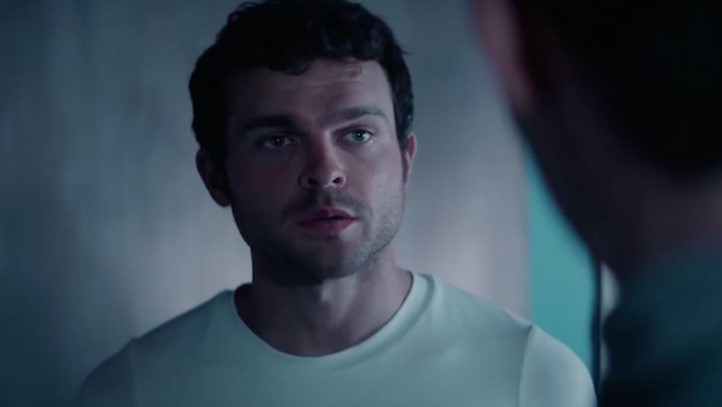 Alden Ehrenreich had proved himself a sci-fi hero with Solo: A Star Wars Story, but seeing as Lucasfilm isn’t planning on following up that movie soon, we don’t know when Han is going to have his next adventure. What’s great is, Ehrenreich has landed a role in the adaptation of Aldous Huxley’s Brave New World, and we have our first teaser.

Here’s the description of the show from Geek Town:

Written by David Wiener (‘Homecoming’, ‘The Killing’), Grant Morrison & Brian Taylor (‘Happy!’), ‘Brave New World’ is set in a seemingly utopian futuristic society. Whilst there is peace and stability, the people are drugged to stay “happy” and have a number of their freedoms removed, such as the prohibition of monogamy, privacy, money, family, and history itself. Children are created and conditioned to play a specific role in society, which is split into castes. For example, if you’re born as a factory worker, you’re conditioned to like living in cities and have no interest in books.

As citizens of New London, Bernard Marx (Harry Lloyd – ‘Counterpart’, ‘Game Of Thrones’) and Lenina Crowne (Jessica Brown Findlay – ‘Downton Abbey’) have only ever known a rigid social order, a perfect pharmaceutical called Soma, and a culture of instant gratification and ubiquitous sex. Curious to explore life beyond the strictures of their society, the two New Worlders embark on a vacation to the Savage Lands, where they become embroiled in a harrowing and violent rebellion. Bernard and Lenina are rescued by John the Savage (Alden Ehrenreich – ‘Solo’, ‘Hail, Caesar!’), who escapes with them back to New London.

I’ll admit, the teaser is kind of too short to pique my interest, but I’m definitely onboard seeing as I’m a huge fan of Ehrenreich. Besides Solo, he was one of the highlights of the Coen Brothers’ Hail, Caesar!. Ehrenreich can play a protagonist, but he’s proven to have the comedy chops as well.

For now, Brave New World is set to debut on NBC’s streaming service Peacock. The platform launches on July 15.